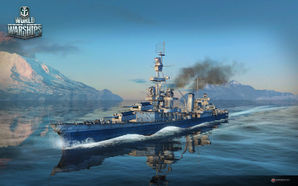 The first U.S. Navy cruiser built under the limitations of the Washington Naval Treaty with powerful artillery but weak armor, which was characteristic of such ships. The cruiser was armed with 203 mm main guns, on the basis of which she was re-designated as a heavy cruiser soon after commissioning. However, the ship's armor actually corresponded to that of a light cruiser.

As the first ship in the US heavy cruiser branch, Pensacola serves as a great example to how the rest of her line plays.

Despite her historical reputation, Pensacola is well protected for her tier. Her 25mm bow and stern armor is thick enough to bounce up to 356mm AP shells. A heavily angled Pensacola can prove difficult to kill for nattleships. However, any shells that do penetrate her armor will deal significant damage due to her poorly protected citadel. This includes battleships carrying guns larger than 356mm. It is also not uncommon for broadside Pensacolas to die at full health from a battleship salvo. So while Pensacola 's armor is strong when employed properly, she will can die quickly if poorly angled or facing battleships with 380mm or larger guns.

Pensacola has amazing guns for her tier. Her ten 203mm guns and powerful AP rounds can potentially one hit kill vulnerable broadside cruisers, or at least deal significant damage. Unique to US heavy cruisers, her AP rounds can penetrate enemy at angles that would cause normal AP rounds to bounce. Her HE is no slouch either with hard hitting salvos that often lights fires. Though Pensacola has formidable firepower, this comes with a few caveats. Due to her slow turret traverse — as slow as some battleships — it can be very difficult to keep track of targets at closer ranges and react quickly enough to enemies showing broadside. A relatively long reload can also sometimes prevent her from punishing broadsides. Pensacola gun ballistics is a mixed blessing. Though its floaty arcs can make it difficult to hit enemies at longer ranges, it also gives her an easier time when firing over islands and keeping her safe from potential threats.

Pensacola 's AA suite is relatively strong for her tier, proving more capable than most other Tier VI cruisers. While good enough to fend off Tier VI carriers, like other Tier VI ships she will struggle against Tier VIII carriers. Regardless of which carrier she is defending against, Pensacola should use her exceptional maneuverability to dodge or mitigate incoming threats.

Pensacola 's overall maneuverability is excellent. Blessed with a responsive rudder and small turning circle, she can dodge long range incoming fire with a good captain at the helm. Her top speed is average, but enough for her to get to where she is needed.

Arguably the only major disadvantage Pensacola suffers from is her poor surface detection. The lowest surface detection she can achieve is 12.4km, comparable to some battleships such as New Mexico. This can make it difficult for Pensacola to get close to enemy ships or to escape focus fire.

As the first US heavy cruiser available to most players, Pensacola serves as a great introduction to the US heavy cruiser play style. Experience with playing Pensacola will allow players to quickly adjust to her successor ships when progressing up the tech tree. Although they can play like typical long range HE farming cruisers, the US heavy cruisers excel at close range gun fights due to their powerful AP rounds and respectable reload. Ideally Pensacola likes to position on the flanks where her powerful AP salvos can devastate broadside enemy ships. When possible, she should close to within 5-10km of the enemy, using islands or smoke to hide her movements. If she can sneak up to unaware enemies, one good salvo can end the fight before it even begins. Pensacola players should be cautious when fighting battleships. While her 25mm armor will bounce 356mm AP rounds when angled, any larger caliber shell will punch through without issue. Pensacola will also go down quickly if she doesn't properly angle due to her poorly protected citadel. Overall Pensacola is a powerful Tier VI cruiser that doubles as a training vessel for players learning the US heavy cruiser play style. 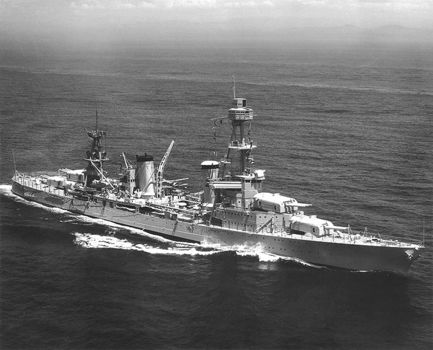 Ships of U.S.A.
Cruisers
Retrieved from "http://wiki.wargaming.net/en/index.php?title=Ship:Pensacola&oldid=324722"
Categories:
Your location:
To log in, select the region where your account is registered
CIS Europe North America Asia
Or use Microsoft Login to enter WoT XBOX ecosystem
Log in