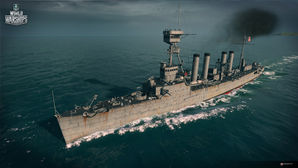 The Phoenix is a rather solid upgrade of a high speed scout cruiser coming from the St. Louis at Tier III. Despite losing on the firepower that the St. Louis carries, as well as the heavier armor set that the Tier III ship carries, the Phoenix makes up for it by gaining nearly 15 knots of speed and vast amounts of maneuverability, as well as boasting a 2 second quicker reload on her 152mm guns, although interestingly her relative DPM is still short of the St. Louis. Her armor is another weakness, having very little in the way of vertical protection and overall plating, making her extremely vulnerable to getting pummeled by both High Explosive and Armor Piercing shells, meaning that the best defense for her is her high speed and not getting hit.

The Phoenix does carry some other tools such as having access to Hydroacoustic Search and torpedo armament, both of which are quite useful should you find yourself in a close range gun duel against enemy cruisers or destroyers, or if you indeed need to find a way to deal with enemy Battleships that pop out of nowhere at close range ( and believe me it does happen )

Overall, the Phoenix is a solid cruiser, but one that needs some time to actually work, using her high DPM combined with her high speed and range to work as a low-tier annoyance that can distract and kill battleships with a combination of chip damage and fires ( and torpedoes if needed )

The Phoenix is based off of a 1917 scout cruiser proposal that was planned as the successor to the Chester class. They were designed to be fast, have good seaworthiness, and a top of the line observation and communication suite in order to serve as the "eyes" of battleship fleets. They were up-gunned and up-armored later in the project's development so that they could fill a destroyer pack leader role. Their comparatively high cost, as much as four destroyers, resulted in Congress flat out refusing to allocate money for their construction as they feared that they would become obsolete before construction would finish. Experience gained during the First World War proved the viability of a scout cruiser design and resulted in the plans being radically redesigned into the Omaha class.

Ships of U.S.A.
Cruisers
Retrieved from "http://wiki.wargaming.net/en/index.php?title=Ship:Phoenix&oldid=317019"
Categories:
Your location:
To log in, select the region where your account is registered
CIS Europe North America Asia
Or use Microsoft Login to enter WoT XBOX ecosystem
Log in