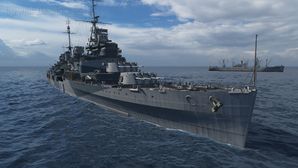 The initial variant of the design of the third series of Town-class cruisers with unique armament comprising sixteen 152 mm guns in quadruple turrets.

Plymouth is available in the Armory for Steel.

Plymouth was an initial design of the Edinburgh series of Town-Class cruisers, the ship was designed with a main battery armament of sixteen 6 in guns, mounted in four turrets, while retaining her maneuverability by also slightly increasing her dimensions. The quadruple turrets were eventually dropped from the design due to the difficulty of manufacturing them.

Plymouth builds on the Tier VIII Edinburgh, maintaining great maneuverability, unique AP shells, a large 114mm armor belt, and strong set of consumables; Repair Party, Smoke Generator, and Hydroacoustic Search. While also getting Surveillance Radar in its own slot, four extra barrels on her main battery, a faster rate of fire, two extra torpedo tubes, better concealment, and a Tier X heath pool. Plymouth takes an already strong package in the British light cruiser, and rounds it out with the ability to radar from within the concealment of her smoke, all while screening for torps with her hydro.

Plymouth has 16mm bow and stern armor, which can be overmatched by 229mm shells and larger, meaning battleship and even large cruiser guns (Goliath, Henri IV) can penetrate her citadel from any angle, but she is protected against ships like Des Moines and Petropavlovsk. In comparison with her Tier X counterpart Minotaur, she has a thicker armor belt and midsection, preventing her from getting citadeled by HE shells from most ships. In addition, this armor belt is 114mm and can be used by experienced captains to bounce any AP shell in the game when angled correctly. She also lacks a vertical step up in her citadel which is found on Minotaur, meaning she doesn’t take as many trollish citadel hits. Furthermore, Minotaur has a section of 14mm plating on her bow which can be overmatched and exploited by any shell 201mm or larger to citadel her, Plymouth does NOT have this weakness. This means Plymouth can fight bow-on to ships with 228mm guns and smaller (that do not overmatch her), but must position correctly to avoid taking devastating damage from larger caliber shells. Plymouth has low hit points for a tier X cruiser, though she compensates for this with a Repair Party, and a very low detection range, which can be brought to within a couple hundred meters of her radar range. This allows her to radar anything that is close enough to spot her.

Plymouth sports sixteen 152mm guns, housed in four quadruple turrets, which maintain the faster shells of the Edinburgh, as opposed to the slower shells of Minotaur, with good accuracy. These can still be lobbed over islands, but they’re significantly easier to hit small, fast moving targets at distance. She has a much longer reload time than Minotaur, but also a much heavier salvo weight (60%) due to having four more barrels. All of this combines to provide a substantial damage potential. Like her tech treem sisters, Plymouth cannot load HE shells into her main battery, but also gets specialized AP shells, combined with her weighty broadside, she's spectacular for annihilating destroyers and other lightly armored ships. On the other hand this can make it difficult to deal high damage to bow in battleships and heavily armored cruisers as captains are usually limited to shooting their superstructures. Plymouth’s secondary armament is, at first glance, surprising for a light cruiser, and will set the odd fire, but should not be counted on as their dispersion is quite poor. As an insurance package for getting pushed, Plymouth carries two quadruple 10km torpedo racks, one on each side, this is exactly half the torpedo complement of her contemporary, Minotaur. Identical to those in the Tier IX and X British light cruiser line;, they have good range, speed, and average detection range. Her launch angles to the aft, combined with their fairly quick reload make them very useful while kiting. Although, only having four of them per side means they’re a good deterrent, and that's all, as she doesn’t possess the alpha damage to sink a healthy Tier X battleship with only one launcher.

The AA suite on Plymouth is largely lackluster in comparison to her peers. Specifically, on all metrics except range, she is about half as effective as her sister, Minotaur. Plymouth’s AA suite has a range of 5.8km and 4 flak clouds per salvo. Carriers will be able to strike Plymouth at will, so captains will rely on teammates and smoke to protect them from being focused by planes. Similarly, she drops depth charges over her stern, meaning she must be on top of submarines to drop depth charges. But her main guns will do good damage to submarines at surface and periscope depths, and her consumables will help her to spot them for her and her team.

Plymouth is an extremely well built package for controlling vision (remaining undetected, even when firing, and spotting undetected ships) and zones of the map. She has excellent maneuverability, concealment, and AP shells, making her well suited to a forward position on or just behind the front line with a friendly destroyer. Using her concealment, captains should look to gain position behind island cover, where they can limit line of sight from enemy ships while utilizing shell arcs to maintain a clear line of fire to support friendly destroyers. Captains may wish to use their smoke for cover, or save it for an emergency escape, depending on the situation. Her priority targets should be, in order; destroyers, radar cruisers, submarines, then targets of opportunity. The reason for this is to eliminate any ship which threatens to spot Plymouth, thus remaining undetected for as long as possible, and making her lack of armor moot. While in smoke it is important to remain mobile as enemies will frequently attempt to blind fire the smoke screen. In addition, it is critical to be mindful of when and where to deploy her smoke so as to not be radared and focused by enemies. Plymouth is a radar cruiser, therefore captains should look to spot undetected targets and utilize her damage potential to provide fire support for allied ships. Sixteen guns on a British light cruiser platform, combined with an extensive consumable suite, Plymouth is a force to be reckoned with in all game modes, casual and competitive.

As a premium ship, Plymouth has no module upgrades to research.

if they wish to lengthen the action time of Surveillance Radar

As a premium ship, Plymouth comes with Default permanent camouflage and a set of permanent combat bonuses.

Ships of U.K.
Cruisers
Retrieved from "http://wiki.wargaming.net/en/index.php?title=Ship:Plymouth&oldid=321998"
Categories:
Your location:
To log in, select the region where your account is registered
CIS Europe North America Asia
Or use Microsoft Login to enter WoT XBOX ecosystem
Log in