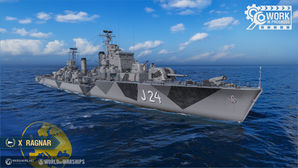 Ragnar was first released 11 August 2021 with Update 0.10.7 and is available in the Armory for

Ragnar enters the Armory nominally as a replacement for Småland. While she does incorporate some elements of Småland's play style, she is more akin to Elbing and Friesland than her premium predecessor at Tier X.

Ragnar has an array of tools that maker her a superb destroyer-hunter. For starters, Ragnar is better-armored than most destroyers. Her hull is made up of 25mm of plate between the barbettes, which gives her the capability to shatter most incoming high explosive rounds of 149mm and below. Destroyer captains that find themselves in a gunfight with an opposing Ragnar are likely to be a bit taken aback by her ability to shrug off incoming damage from their main battery guns as a result of this quirk of construction. Further enhancing her survivability is her 30,000 point health pool (with the Survivability Expert skill) - nearly equal to some Tier X light cruisers - and her access to the Repair Party consumable. Rounding things out is Ragnar’s Surveillance Radar. With a 7.5km range - equivalent to her lowest achievable surface detection - and a 25-second duration, she can quickly counter-spot ships that spot her on the surface.

To punish destroyers that she spots, Ragnar mounts light cruiser guns on a destroyer hull. Similar to German destroyer leader Elbing, Ragnar comes equipped with 152mm guns: four rifles that reload every 3.4 seconds. While a straight damage-per-minute comparison seems to leave Ragnar at the back of the pack, the reality is that she outperforms what the raw numbers might suggest. Her ability to bully opposing destroyers with her rate of fire and health pool is unique in World of Warships. When not picking on opposing destroyers, Ragnar can sit at longer ranges and use her HE to light fires on enemy cruisers and battleships; her 11% fire chance per shell is best-in-tier amongst Tier X destroyers.

Everything isn't sunshine and roses, of course. Like Friesland before her, Ragnar relies wholly on her main battery for damage; she has no torpedoes. Her huge health pool and armor advantage mean that she has an inflated surface detection radius to help balance her out against opposing destroyers; similar to Elbing, she is best played as a second-line destroyer, backing up friendly destroyers with better detection in their efforts to fight over capture zones. Unlike most high-tier European destroyers, Ragnar has no long-range anti-aircraft aura to speak of. Her mid-range aura is quite strong, but enemy planes that press home an attack against her are virtually guaranteed to survive to drop their ordnance due to her lack of flak. Additionally, her large hull size and below-average rudder shift time means that she handles poorly at best. Players familiar with how Harugumo handles will understand what they're up against in this department when considering purchasing Ragnar.

In summary, Ragnar marries the all-gun destroyer play style of Friesland to the health pool of Elbing and adds Småland’s radar. She's a highly specialized ship, exceptionally good at bullying most opposing destroyers and capable of harassing enemy cruisers and battleships. Played well, she is a nightmare for opposing destroyer captains to deal with. Lacking access to smoke and with her poor handling, however, she can be focused off the board by a coordinated enemy team if she finds herself in a bad position.

As a premium ship, Ragnar has no module upgrades to research.

There are two potential build priorities for Ragnar, one as a destroyer hunter-killer, the other as a long-range harasser of heavier ships. For the former, maximize her stealth, radar, and damage-per minute. Strengthening her survivability is important, too, but her health pool is already larger than most of the destroyers she may encounter.

To be effective against heavier ships she will need more range and better shell penetration.

The recommended upgrades for Ragnar are as follows:

Most of Ragnar’s upgrade choices are fairly self-explanatory. Players have a difficult choice in Slot 2 between Engine Boost Modification 1

The other tough choice comes in Slot 6 between Main Battery Modification 3 (reload) and Gun Fire Control System Mod 2 (range). Players wishing to focus on anti-destroyer duties should equip the former; those looking for more of a generalist build should take the latter, giving her the range to harass larger enemy ships.

Most of the tough choices for Ragnar’s commander skills come in Tiers 3 and 4. While Adrenaline Rush, Superintendent, and Survivability Expert are almost mandatory, a valid case can be made for Main Battery & AA Specialist as well. Concealment Expert remains the most important Tier 4 skill, but both Fearless Brawler and Main Battery & AA Expert are worthy of consideration if building out a commander that is meant to be capable of long-range harassment of heavier enemy ships.

As a premium ship, Ragnar comes with Default permanent camouflage and a set of permanent combat bonuses.

Ships of Europe
Destroyers
Retrieved from "http://wiki.wargaming.net/en/index.php?title=Ship:Ragnar&oldid=319476"
Categories:
Your location:
To log in, select the region where your account is registered
CIS Europe North America Asia
Or use Microsoft Login to enter WoT XBOX ecosystem
Log in