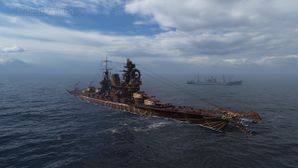 The vessel is immeasurably ancient—a relic of days long forgotten. It was built in the shipyards orbiting a world of proud and fearsome warriors. Though the citizens adhered to the Imperial creed and paid their tithes, secret cabals on the planet's surface worshipped Khorne, the Lord of Rage. These cults were strong. They were hated. They were outnumbered. At the appointed hour, they rose up and tried to overthrow their loyalist masters. They failed. They were defeated in a long, bloody war and all, to a man, perished in flames. Their name was erased from history. But the fickle whims of the Warp decreed that their vengeful spirits would forever haunt the vessel Ragnarok, whose hull was being constructed in the docks above the planet's surface. The furious spirits invaded the hull and ensured the vessel served none but the Ruinous Powers. To this day, Ragnarok and all aboard it cry, "Vengeance! Death! Blood for the Blood God!"

Ragnarok was first released in June 2020 in collaboration with Games Workshop.

As a premium ship, Ragnarok doesn't have any upgrades to research.

The recommended upgrades for Ragnarok are as follows:

Ragnarok can equip the following consumables:

As a premium ship, Ragnarok comes with Default permanent camouflage and a set of permanent combat bonuses.

Ships of Japan
Battleships
Retrieved from "http://wiki.wargaming.net/en/index.php?title=Ship:Ragnarok&oldid=322027"
Categories:
Your location:
To log in, select the region where your account is registered
CIS Europe North America Asia
Or use Microsoft Login to enter WoT XBOX ecosystem
Log in