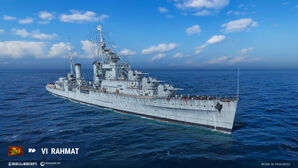 A Dido-class light cruiser built in Great Britain. A small ship armed with dual-purpose artillery, designed to protect a squadron or convoy from attacks by destroyers and aircraft.

Availability of researchable upgrades for Rahmat is as follows:

Ships of Pan-Asia
Cruisers
Retrieved from "http://wiki.wargaming.net/en/index.php?title=Ship:Rahmat&oldid=319605"
Categories:
Your location:
To log in, select the region where your account is registered
CIS Europe North America Asia
Or use Microsoft Login to enter WoT XBOX ecosystem
Log in