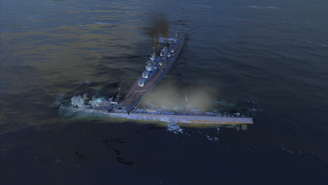 A Tashkent survives after ramming an enemy Yūgumo.

Ramming is the act of colliding with another ship. Typically, ramming an enemy ship is a last-ditch tactic, as it usually results in the destruction of the involved ships. A collision between allied ships causes team damage, but the amount of damage is drastically lower than those between allied and enemy ships.

Damage from a collision is not determined by a ship's current hit points (HP). Rather, a ship's total HP pool determines the maximum amount of damage that it can inflict to an enemy ship. In a high-speed collision, a ship with a large HP pool has the potential to inflict heavy damage. Ships with small HP pools, such as destroyers, have a reduced maximum damage output in a collision.

For example, Yamato has 97,200 HP. Since ramming damage is determined by the total HP pool, Yamato is capable of inflicting 97,200 damage through ramming. If a Yamato with 5,000 HP remaining were to ram an enemy Yamato with 97,200 HP, both ships would be destroyed. This is because the maximum damage output during a collision is determined by the total HP pool of ships, rather than the current HP in a battle.

It seems that the ramming damage caused by a ship is roughly proportional to its mass and to the square of the relative speed (see Kinetic energy), except that the highest possible damage is the ship's total HP pool.

If a player rams an enemy ship during a battle and survives, that player will be awarded a Die Hard achievement.[1]

The first question is whether to ram at all. Since it is not trivial to pull of a ram, and even a successful ram typically results in the destruction of both ships, you must consider carefully whether this is better than the alternatives. Consider the following factors:

Some factors influencing the chances of a successful ram:

If you miss your ram, or decide to break it off at the last moment, you are likely still in a dangerous situation. Consider the following:

The most effective way of avoiding a ram is to not get into a situation where it is even a viable possibility for the enemy in the first place. For example:

Noticing a ram threat early will also let you avoid it with less risky actions. If a ram is in the offing, consider the following:

Remember, Total HP Pool is your maximum HP, not your current HP.

Retrieved from "http://wiki.wargaming.net/en/index.php?title=Ship:Ramming&oldid=315442"
Category:
Your location:
To log in, select the region where your account is registered
CIS Europe North America Asia Republic of Korea
Or use Microsoft Login to enter WoT XBOX ecosystem
Log in