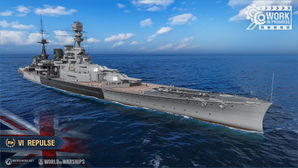 A Renown-class battlecruiser. A very fast-going ship for her time. The guns she carried were similar to those mounted on Queen Elizabeth-class battleships.

Repulse was first released as the Stage 18 reward in the Clydebank Dockyard on 8 December 2021. She was then made available for doubloons with the release of update 11.2 in March 2022.

Originally laid down as an improved Revenge-class battleship, the Royal Navy suspended construction on Repulse and her sister Renown when it was thought that they wouldn't be completed in time to participate in the First World War. After the success of battlecruisers at the battle of the Falkland Islands, construction restarted, though Repulse would see little service in the war However, between the wars, she received two extensive refits to increase her armament, armor and torpedo protection. In World War Two Repulse participated in unsuccessful searches for Gneisenau, and Scharnhorst, before her redeployment to the Pacific with the Prince of Wales as part of Force Z. On December 10th, 1941, both capital ships were sunk by Japanese torpedo bombers when attempting to intercept Japanese landings in Malaya.

Repulse drastically differs from her nation's Tier VI battleship counterparts. Despite losing a twin 381mm turret compared to Warspite and Queen Elizabeth, she makes up for it with battlecruiser dispersion, making Repulse the most accurate battleship at Tier VI. As a battlecruiser, Repulse trades the heavier armor seen on Warspite and Queen Elizabeth for a quick top speed of 31.7 knots, faster than all other battleships in her tier.

Repulse’s bow and stern protection is only 16mm compared to most other Tier VI battleships that have 26mm bow and stern plating. This allows every ship with a gun caliber of 228mm or higher to overmatch her bow and stern. The 26mm torpedo protection reaches just above the waterline, allowing well aimed shots along the waterline to penetrate the 229mm plated casemate armor belt protecting the citadel. The main armor belt is covered in 152mm plating with a lighter 38mm belt up to the deck, protecting the citadel well from mid and small caliber salvos. Repulse has a large superstructure that is covered in 16mm plating, allowing for smaller caliber shells to penetrate and deal damage.

Repulse is armed with three twin 381mm turrets with two mounted forward, and one aft. While being the same guns found on Warspite and Queen Elizabeth, Repulse has the same dispersion formula found on most other battlecruisers, but benefits from tighter dispersion with a maximum dispersion of 149m and sigma of 2.0. She also reloads three seconds faster than her cousins at 27 seconds. Pairing this excellent accuracy and reload with a respectable range of 19.8km, Repulse can comfortably fight at any range and consistently deal damage.

Repulse should use her high speed to get to a flank early in the battle and provide crossfire onto enemy cruisers and battleships. Due to the lack of armor, engaging at mid to long range and using her accurate salvoes to focus broadside enemies. If the ship becomes the target of focus fire, Repulse can use her stealthy concealment of 12.57km with Concealment Expert and Engine Boost

to quickly relocate to a different position. She should stick with a supporting cruiser to help fend off attacks from enemy aircraft and destroyers. Overall, Repulse is a great support and flanking battlecruiser that can quickly redeploy to other parts of the map to support pushes or retreats.

As a premium ship, Repulse has no module upgrades to research.

As a premium ship, Repulse comes with Default permanent camouflage and a set of permanent combat bonuses.

Repulse is depicted after her 1930s reconstruction. Her original 1916 configuration does not exist in World of Warships.

Ships of U.K.
Battleships
Retrieved from "http://wiki.wargaming.net/en/index.php?title=Ship:Repulse&oldid=322482"
Categories:
Your location:
To log in, select the region where your account is registered
CIS Europe North America Asia
Or use Microsoft Login to enter WoT XBOX ecosystem
Log in