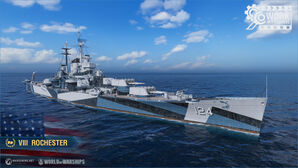 An Oregon City-class heavy cruiser with more advanced AA weaponry and a different arrangement for her AA defenses as compared to her direct predecessors—the Baltimore-class ships.

Rochester was first released for sale on 1 October 2021.

Tier VIII American premium cruiser Rochester is nearly identical to her sister ship Baltimore. She shares her sister’s hull and main battery, but differs in concealment, utility, damage per minute, and Anti Aircraft firepower. Most notably, Rochester mounts the Smoke Generator consumable instead of the Surveillance Radar found on Baltimore.

Rochester features a 27mm bow, stern, midsection, and deck plating. As with Baltimore, this makes her essentially invulnerable when angled to ships with a gun caliber of 381mm and below. However, battleships with a gun caliber of 406mm and above will have no trouble punching through her armor for massive amounts of damage. In high tier matches where battleships often have larger gun calibers, captains should look to play more conservatively, using islands or smoke screens to fire upon targets while staying undetected. In addition, the 27mm plating leaves her vulnerable to HE spam from enemy cruisers.

The only difference between the 203mm guns of Rochester and those of Baltimore, is that the former reloads in 12 seconds and the latter reloads in 10 seconds. Captains familiar with Baltimore will recognize the floaty shells, slow turret traverse, and hard hitting AP shells. As American super-heavy AP shells, they have great penetration and improved penetration angles, making them effective against enemy cruisers and battleships at all ranges. Of course, captains should fire HE against destroyers and sharply angled ships, penetrating up to 32mm of armor with a 14% fire chance.

Rochester’s maneuverability is decidedly average, with a turning radius of 750 m and a rudder shift of 10.5 seconds. As a result, cruiser captains with less experience or skill in dodging battleship salvos should refrain from playing her in open water. This can be partially compensated by her excellent concealment - with a surface detectability range of 11.7km (9.5km with relevant upgrades), Rochester is one of the stealthiest heavy cruisers at Tier VIII. Not only does this allow her to disengage freely in the open water, but it also makes her an effective ambush predator.

Rochester wields one of the best anti-aircraft suites at Tier VIII, with outstanding mid-range continuous damage. Combined with her considerable flak and especially with the Defensive AA fire consumable active, her AA menaces enemy aircraft, often sending large portions of squadrons to the depths of the ocean.

What sets Rochester apart from her tech tree counterpart is that she has access to two charges of the smoke generator consumable. Her smoke has both long action time and dispersion times, at 30 seconds at 104 seconds respectively. In addition to this, she can slot either Hydroacoustic search or defensive AA fire. Captains usually should mount Hydroacoustic search, as it allows her to easily evade torpedoes, even when at low speed in smoke. Paired with the Propulsion Modification 1 upgrade, she can dodge torpedoes without leaving the safety of her smoke screen. As a final note, captains should ensure that no enemy ships sail within her smoke firing penalty of 6.8km before firing from smoke, under pain of detection and an early return to port.

Rochester is best described as an opportunistic cruiser. Between her excellent concealment, floaty shells that can arc over islands, and smoke generator consumable, she wields all of the tools necessary to dictate the terms of every engagement and ensure tactical advantage in battle. Captains familiar with the island hugging play style of the US Cruiser line can view Rochester's smoke consumable as a makeshift island generator. Like an island, the smoke either serves as a choke point to prevent enemy ships from pushing through an area, or a “get out of jail free” card that allows her to safely disengage from an unfavorable engagement.

Due to Rochester’s low surface detection, Captains should keep the “Concealment Trapping” technique in mind during battle. This tactic uses the buffer zone between her concealment and that of a less stealthy enemy cruiser to put herself in an advantageous kiting position. When the enemy cruiser first detects her, they must sail bow in to her while she is stern in. This gives the enemy cruiser a difficult choice to either continue sailing forward and take focus fire from the captain's supporting teammates, or risk crippling damage from her AP shells while turning out to disengage.

With a combination of excellent armor, main battery guns, concealment, AA firepower, and utility, Rochester is one of the strongest cruisers at Tier VIII. Her weaknesses are limited in number, and in some cases end up playing to her strengths. Inexperienced players and veterans alike will have success with Rochester, a true apex predator at Tier VIII.

As a premium ship, Rochester has no module upgrades to research.

As a premium ship, Rochester comes with Default permanent camouflage and a set of permanent combat bonuses.

As a premium American cruiser utilizing flags that boost your AA abilities are a no brainer. Furthermore Rochester has the added benefit of having a smokescreen and hydro. Taking flags that enhance those consumables boost your potential in battle.

Ships of U.S.A.
Cruisers
Retrieved from "http://wiki.wargaming.net/en/index.php?title=Ship:Rochester&oldid=319443"
Categories:
Your location:
To log in, select the region where your account is registered
CIS Europe North America Asia
Or use Microsoft Login to enter WoT XBOX ecosystem
Log in