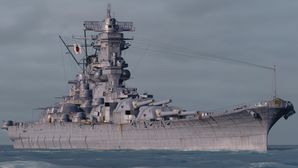 Shikishima is a Japanese Tier X special Battleship armed with six 510mm guns, the largest in the game. She features similar characteristics to Yamato and fills a classic sniper battleship role. She is available for purchase for 32,000 steel.

Shikishima features six 510mm/45 Type 58 guns housed in 3 twin turrets. These guns have a high range of 26.6km which is further increased by the Spotter Plane consumable.

While her guns are massive at 510mm, they do not provide any meaningful overmatch advantage in comparison to Yamato’s 460mm guns. The AP shells overmatch 35mm plating and feature high alpha damage as well as high penetration. Her HE shells feature a 40% fire chance and 85mm penetration. Shikishima’s large caliber guns allow her to overmatch and deal damage to every ship in her matchmaking spread as long as aiming and dispersion allow.

Her guns are accurate, featuring better accuracy than a Yamato with the Main Battery Director System. However, due to having only 6 guns, her accuracy can be frustrating due to the low amount of shells per salvo. This can be offset by equipping Main Battery Modification 3

bringing the reload down to 23.7 seconds

The turrets on Shikishima are very slow, with a 180 degree turn time of 57.5 seconds. Careful positioning and map awareness are necessary to ensure all guns remain in the fight.

Shikishima’s hull features a similar armor scheme to her predecessor Yamato. Her concealment of 14.1km is standard amongst Tier X battleships. Her hull has a high health pool of 97,200 and retains a 55% Torpedo damage reduction. Her overall armor scheme is good, with 57mm deck plating and 32mm bow and stern armor. However, her citadel is very large and retains the ‘cheek’ plating weakness. At closer ranges, high caliber AP shells will penetrate and citadel Shikishima through the cheek of her bow armor.

As a result of her armor layout, Shikishima captains should play her at medium to long ranges.

Shikishima features a secondary armament which consists of twenty 100 mm/65 type 98 Dual Purpose guns. They are the same guns found on Harugumo and have 30mm HE penetration, a fast rate of fire of 3 seconds, and are dual purpose guns that contribute to her AA DPS. A secondary build is not recommended on Shikishima due to weakness of her armor at close ranges and the lack of increased range/accuracy on the secondary guns.

Shikishima is a slow battleship, with a top speed of 27 knots. Her rudder shift time and turning circle radius is decent at 18.7s and 900m respectively. Early positioning is vital due to her slow speed preventing quick relocation.

Shikishima has a high long/medium AA DPS (234 and 437 respectively) for a battleship. This is due to the dual purpose 100mm guns she possesses. This is not enough to stop an aircraft carrier from striking so grouping with allied ships to overlap Anti-Aircraft aura is recommended in games with carriers.

Shikishima is a ship that Yamato players will find familiar. The core gameplay of long range artillery support remains the same even with the different quirks of 510mm guns.

Shikishima plays much like the classic sniper battleship, positioning around +15km away from cap circles and providing crossfire onto enemy battleships and cruisers. Because of her large guns that feature 35mm overmatch, players should mainly fire AP at cruisers and capital ships. While her secondaries feature improved penetration and fast fire rate, her poor close range armor scheme and slow hull speed means she is not a brawler.

Shikishima is essentially a sidegrade to Yamato. While Yamato delivers accurate 9 shell salvos that feature 32mm overmatch, Shikishima does that with less shells and faster reload.

As a special ship, Shikishima doesn't have any upgrades to research.

As a premium ship, Shikishima comes with Default permanent camouflage and a set of permanent combat bonuses.

Ships of Japan
Battleships
Retrieved from "http://wiki.wargaming.net/en/index.php?title=Ship:Shikishima&oldid=324937"
Categories:
Your location:
To log in, select the region where your account is registered
CIS Europe North America Asia
Or use Microsoft Login to enter WoT XBOX ecosystem
Log in