Homepage/
World of Warships/
Shinonome B

Jump to: navigation, search
12.0
Shinonome B 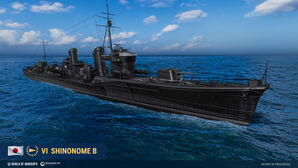 One of the first Fubuki-class destroyers, with an incredible striking power coming from her three 610 mm torpedo launchers. The ship significantly surpassed preceding-class destroyers in terms of artillery firepower. However, her AA defenses were weak, which was characteristic of all Japanese destroyers.

Shinonome B was first released for sale on 18 November 2022.

Shinonome B, or Shinonome Black, is a clone of Shinonome with an attractive black skin.

Forgoing all of the intricate details like anti-aircraft rating and handling characteristics, any comparison of the two ships boils down to this: Fubuki has four guns in two twin mounts and 10.0 km torpedoes, while Shinonome B has six guns in three twin mounts to go with 8.0 km range torpedoes. Digging deeper, we see that Fubuki’s torpedoes not only travel farther, they hit harder: over 16,000 rated damage each compared to Shinonome B’s 14,400 damage apiece. While this makes Fubuki’s torpedoes more dangerous than Shinonome B’s, Shinonome B’s torpedoes are nothing to sneeze at. They are a comfortable middle ground between Fubuki’s two different torpedo modules, retaining the lower damage output of the Type 8 mod. 1's, but picking up some additional range as well as speed.

Both sister ships share the Japanese destroyer line's slow turret traverse; this weakness can make fighting at close range tricky, especially against American destroyers and their quick-turning guns. Shinonome B gets more gun barrels, but has a slower reload time and less range. While she won't be winning many gun duels, the extra barrels give her a bigger damage potential per salvo against weakened enemies. Shinonome B’s anti-aircraft suite is even more pathetic than Fubuki’s; captains are advised to simply disable her AA guns and never turn them on.

Overall, captains who are familiar with the play style of the Japanese destroyer line will feel right at home in Shinonome B.

As a premium ship, Shinonome B has no module upgrades to research.

Shinonome B equips the following consumables:

As a premium ship, Shinonome B comes with Default permanent camouflage and a set of permanent combat bonuses.

Ships of Japan
Destroyers
Retrieved from "http://wiki.wargaming.net/en/index.php?title=Ship:Shinonome_B&oldid=324347"
Categories:
Your location:
To log in, select the region where your account is registered
CIS Europe North America Asia
Or use Microsoft Login to enter WoT XBOX ecosystem
Log in