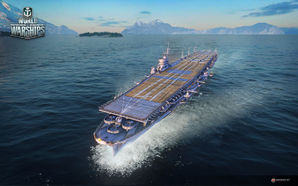 The notorious heavy aircraft carrier whose design stemmed from the experience gained in building the Hiryu-class carriers. Compared to her predecessor, Shōkaku came with reinforced anti-aircraft armament, a larger air group and somewhat improved armor. During the course of World War II, the ship's AA capabilities were significantly enhanced.

When fully upgraded, player can attack 5 times with double torpedoes per time. The torpedo range, speed and damage is excellent. With a full concealment build, players could drop their payload almost the instance the planes are spotted. The downside is that the planes are one of the weakest of all tier VIII carriers, and players need to utilize the long range of the torpedoes for longer duration of its usage. The stock torpedo bombers has 10 planes with a total of 5 attack runs and 2 planes in a attack run. The researchable torpedo bombers has the same numbers but with faster plane speed and better health.

Unlike most carriers, Shokaku uses AP dive bombers. German battleships, cruisers; French battleships; Soviet battleships; American cruisers are good candidates for citadel hits. But keep in mind that these planes are very weak and using against the aforementioned targets may not be viable from early on in the match. Use islands and target HE saturated ships for finishing or devastating blows. As the AP fuse need time to arm, using against destroyers are quite ineffective. The aiming mechanism is different from USN dive bombers as the aiming circle initially dip backward slightly before moving forward at the very last minute. This can be useful if the player overshoot the target's momentum, but with less possibility of a citadel hit. The stock dive bombers has 9 planes with a total of 3 attack runs and 3 planes in a attack run. The researchable dive bombers has the same numbers but with faster plane speed and better health.

Shokaku is more of a anti-BB, cruiser carrier in its role as it lacks HE bombs of the Americans or the fast rockets of the British. Also it has one of the weakest planes with low health pools. This is a serious disadvantage compared to the Lexington or the Implacable as tier 8~10 battles intoduce cruisers and battleships with stong AA. Concealment of planes, use of islands to block AA are essential to keep up the air attacks till late in the game. Any vital mistakes that leads to annhiliation of squadrons will leave playes with only 1 or 2 planes per squadron. Furthermore, the ship lacks a powerful AA defense, so it is best to take advantage of her concealment and remain unspotted for as long as possible.

The recommended upgrades for Shōkaku are as follows:

to bring Shōkaku`s torpedo bombers' concealment down to 6.7km. This means players can start their drop well beyond the detection range of the planes and surprise ships with 5.4k range torpedoes. However, if players are losing planes faster then they anticipate, they should go for Flight Control Modification 1

Any skills that are related to an enemy vessel firing on your carrier are not useful, as the cost-benefit of investing in survivability skills is not worth the minimal benefit they offer. Shōkaku is large and unarmored, and will not survive an attack by any ship larger than a destroyer. Shōkaku captains must position their ship near friendlies or behind islands, away from enemy fire.

Shōkaku (Japanese: 翔鶴 "Soaring Crane") was an aircraft carrier of the Imperial Japanese Navy, the lead ship of her class. Along with her sister ship Zuikaku, she took part in several key naval battles during the Pacific War, including the attack on Pearl Harbor, the Battle of the Coral Sea and the Battle of the Santa Cruz Islands before being torpedoed and sunk by a U.S. submarine at the Battle of the Philippine Sea.

Ships of Japan
Aircraft Carriers
Retrieved from "http://wiki.wargaming.net/en/index.php?title=Ship:Shokaku&oldid=323723"
Categories:
Your location:
To log in, select the region where your account is registered
CIS Europe North America Asia
Or use Microsoft Login to enter WoT XBOX ecosystem
Log in