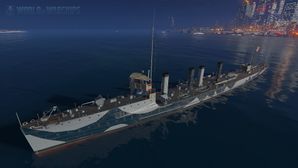 The first U.S. Navy destroyer designed to operate on the high seas. Unlike all destroyers built before, she was equipped with a turbine power unit and uniform caliber main guns.

Smith is a unique ship in that it has three single tube torpedo launchers, one on each side and one near the stern that can fire to either side. Her torpedoes have low damage, range, and speed, but they reload every 11 seconds! This gives her a very interesting play style contrasting to the higher alpha strikes of the other low tier destroyers. She can afford to randomly fire torpedoes at possible enemy locations. However with only a 4.5km range, this works best in confined areas such as the southwest section of Big Race and maps such as Islands which have lots of cover to allow her to get close. (Be careful not to hit allies!).

Fortunately, while not fast, Smith is quite agile. An amusing tactic is to find a low tier battleship and simply circle it faster than its turrets can turn, pumping torpedoes into it.

As for Smith's guns, they are the smallest and weakest in the game, rivaled only by Tachibana's. They don't do much damage, and the HE will bounce off an Umikaze. They reload quickly, but that's all they have going for them.

Overall, Smith — while not particularly good — is terrific fun to play.

As a premium ship, Smith doesn't have any upgrades to research.

The recommended upgrade for Smith is:

As a premium ship, Smith comes with Default permanent camouflage and a set of permanent combat bonuses.

The Smith class was the first series of true destroyers constructed under the provisions of the Converse Report. Named for the convening admiral, the consequent Converse Commission was charged with determining the qualities necessary for future US Navy destroyers.

The primary characteristics decided upon were as follows:

Authorized by Congress in 1907, the Smith class would consist of five destroyers. They would have the distinction of being the last US Navy destroyers to be coal-fired, and the first equipped with turbine propulsion machinery.

Smith herself was laid down in March 1908 and commissioned in late November of 1909. She was assigned to the Atlantic Torpedo Fleet. Placed in reserve in 1912, she was reactivated in 1915 to take part in neutrality patrols off the US East Coast. In 1916, Smith joined the Naval Auxiliary Reserve for assistance in recruiting duties.

On 1 April 1917, in preparation to the US declaration of war against Germany, she was sent to New York City to assist with the detention of German merchant vessels in the harbor. Smith then joined the patrolling units off the US East Coast on anti-submarine and anti-raider duty until May, at which time she arrived in Charleston for repairs and refit.

In July, Smith was sent to Brest, France. There she served as an escort for both inbound and outbound convoys until the end of the war. During that time, Smith engaged in no combat.

Smith returned to the US in 1919, where she was decommissioned in 1920. Scheduled to be sold for scrapping, she was instead used as a target for experiments in naval bombing. Afterward, she was towed back to Philadelphia, but in 1921 was again used in the testing of naval bombing. After the second round of tests, Smith was again returned to Philadelphia and sold off for scrapping in December 1921.

Ships of U.S.A.
Destroyers
Retrieved from "http://wiki.wargaming.net/en/index.php?title=Ship:Smith&oldid=322794"
Categories:
Your location:
To log in, select the region where your account is registered
CIS Europe North America Asia
Or use Microsoft Login to enter WoT XBOX ecosystem
Log in