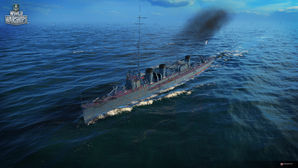 Designed as a "medium-tonnage" destroyer, this ship was intended to handle a wide range of tasks, from reconnaissance operations and torpedo attacks, to artillery engagements against enemy ships. Owing to high-tech propulsion, she could travel at a very high speed.

Tier II's Storozhevoi marks the beginning of the Russian destroyer branch and introduces the basic gameplay elements of the line. Storozhevoi plays best when opponents are kept at arm's length and while her guns to do consistent damage; her speed and range should allow her to do so easily.

Although she can launch 9 torpedoes at a time and reload them rather quickly, captains should not rely on them and are advised to forget about them in most cases. They should be used only if an unsuspecting battleship presents an opportunity — for example, wandering too close to an island, allowing for a close approach and subsequent torpedo attack — or an enemy destroyer wanders too close. Other than such chance encounters, the 4.0 km range of Storozhevoi’s torpedoes is suicidally close.

The recommended upgrades for Storozhevoi are as follows:

Storozhevoi can equip the following consumables:

Ships of U.S.S.R.
Destroyers
Retrieved from "http://wiki.wargaming.net/en/index.php?title=Ship:Storozhevoi&oldid=322887"
Categories:
Your location:
To log in, select the region where your account is registered
CIS Europe North America Asia
Or use Microsoft Login to enter WoT XBOX ecosystem
Log in