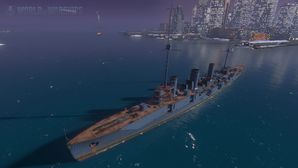 The first light cruiser with turbine propulsion, laid down for the Imperial Russian Navy. Svietlana was notably faster than her predecessors. Her armor protection and weapons were quite good for her time. The ship's artillery was remarkable for its long range and strong ballistic properties.

Svietlana is a unique ship with many interesting qualities that make her stand apart from her tier 4 rivals. Most noticeably she has numerous 130 mm guns as her main battery armament - the caliber later seen on higher tier Soviet destroyers. She can fire eight of these guns per broadside, the most of any Tier IV cruiser. In addition, swinging the bow of the ship back and forth can bring almost all the guns to bear on a target you are charging at, as well as making yourself hard to hit.

The downside for the cruiser though is the poor reload time, unlike the other cruisers for it's tier. The AA weaponry is also for show and will rarely shoot down any aircraft. The placement of torpedoes is also something to be aware at, due to the fact that their placement is way at the back of the ship and exposes your entire broadside when attacking. This allows the enemy easy citadel hits.

Availability of researchable upgrades for Svietlana is as follows:

The recommended upgrades for Svietlana are as follows:

Svietlana can equip the following consumables:

Krasnyi Krym (Russian: Красный Крым - Red Crimea) was a light cruiser of the Soviet Navy. She was laid down in 1913 as Svetlana for the Imperial Russian Navy, the lead ship of the Svetlana class. She was built by the Russo-Baltic Yard in Tallinn, Estonia and launched in 1915. Her hull was evacuated to Petrograd when the Germans approached the port in late 1917 and laid up incomplete during the Russian Revolution. The ship was completed by the Soviets in 1926. During World War II she supported Soviet troops during the Siege of Odessa, Siege of Sevastopol, and the Kerch-Feodosiya Operation in the winter of 1941—42. Krasnyi Krym was awarded the Guards title on 18 June 1942. The ship was reclassified as a training ship in November 1954 before being scrapped in July 1959.

Ships of U.S.S.R.
Cruisers
Retrieved from "http://wiki.wargaming.net/en/index.php?title=Ship:Svietlana&oldid=314993"
Categories:
Your location:
To log in, select the region where your account is registered
CIS Europe North America Asia Republic of Korea
Or use Microsoft Login to enter WoT XBOX ecosystem
Log in