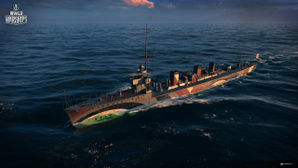 This re-skinned version of Tachibana was available as an invite code exclusive to select motherboards or graphics cards from ASUS. She was also available through a series of in-game missions in May 2018. Tachibana Lima is now available for cash (99¢), Coal, or Doubloons.

As a Premium ship, Tachibana Lima doesn't have any upgrades to research.

The recommended upgrades for Tachibana Lima are as follows:

is available for players who strongly dislike detonations, but a Juliet Charlie signal is more effective.

As a premium ship, Tachibana Lima comes with Default permanent camouflage and a set of permanent combat bonuses.

Players who dislike detonations may wish to equip Juliet Charlie (

) can be used, in conjunction with the Engine Boost

consumable, to attain a maximum speed of 33 knots. Victor Lima (

) can, when used together, increase the fire chance of HE shells by 1%, or 3% total if the captain has Demolition Expert as a chosen skill. Juliet Whiskey Unaone (

) will increase the chance of flooding and thus the efficiency of Tachibana Lima’s torpedoes.

The Tachibana was a Sakura-class destroyer built for the Imperial Japanese Navy between 1911 and 1912. The primary difference between the Sakura and Umikaze class were the types of engine; with the former being powered by vertical expansion engines and the latter by Parsons turbines. She served for 20 years before being decommissioned in 1932 and scrapped in 1933.

Ships of Japan
Destroyers
Retrieved from "http://wiki.wargaming.net/en/index.php?title=Ship:Tachibana_Lima&oldid=322440"
Categories:
Your location:
To log in, select the region where your account is registered
CIS Europe North America Asia
Or use Microsoft Login to enter WoT XBOX ecosystem
Log in