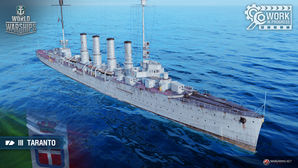 A light cruiser built for the German Navy and transferred to the Royal Navy of Italy after World War I. In addition to the 150 mm main guns, the ship was armed with two single-tube torpedo launchers.

Taranto can equip the following consumable:

Taranto, the former Strassburg, was of the German Magdeburg-class light cruisers. Although developed from the previous Kolberg-class, the Magdeburg-class were considerably more advanced, and though of a similar displacement were both faster and much better armored. At 4,564 tons normal load and 5,281 tons fully loaded, was only a few hundred tons heavier than the Kolberg-class (4,362/4,915 tons). However, much less of this was taken up by the hull itself – the Magdeburg-class incorporated a new longitudinal framing method, which proved difficult to master but well worth the effort. The hull could be both longer and slimmer than the prior class, but overall stronger. As a result, the hull shape of these light cruisers was significantly better, also helped by a new bow shape (which overall improved sea-keeping).

For the first time on a German light cruiser, an armor belt was fitted, 60m thick and protected most of the length of the ship. Rather than be mounted on the hull, it was actually built into the hull as part of the ship, contributing to the strength of the hull. Behind the belt, there was a sloped deck as on earlier protected cruisers, with the flat portion being 40mm thick and the slopes 60mm. The deck sloped down to the ship ends, where it was 20mm thick. The conning tower had 100mm thick plating around it, with a 20mm roof. Gun shields were 50mm thick, and ammunition hoists were protected by 20mm plating.

Propulsion power was provided by sixteen Schultz-Thornycroft boilers, coal-powered but with fuel oil sprayers, operating at a pressure of 16kg/cm2. These fed a pair of parson-type steam turbines, and produced a total of 25,000 shp, for a top speed of 27 knots.

As built, the main armament consisted of twelve single 10.5cm/45 SK C/06, which fired 17.4 kg shells to a maximum range of 12,700 meters at a rate of 15 rounds/minute. Six could bear to either broadside. Two 500mm torpedo tubes were fitted underwater, one on each beam. Minelaying capacity allowed for 120 mines. In 1915, Strassburg underwent a modernization that removed all the 10.5cm guns and replaced them with seven of the so-called 15cm/45 SK C/06 (actually a 149/43) in single mounts, which fired a much heavier 45.3 kg shell to a range of 14,900 meters, and at a rate of about 5 r/m. Five could bear to a broadside, so despite the deceased number of guns, the weight of fire was twice what it was before. Additionally, two 8.8cm anti-torpedo boat guns were mounted on the centerline, and a pair of deck-mounted single 500mm torpedo tubes.

In the early 1920s, after being pressed into service with the Regia Marina and re-commissioned as Taranto, the cruiser underwent a number of modifications. Initially the pair of 8.8cm guns were removed, and replaced by a pair of 76mm/40 Modello 1917 AA guns, one on either side of the funnels. In 1926, a seaplane catapult was mounted where the 8.8cm guns had formerly been, for a Macchi M.7 (replaced in 1931 by a CANT 24R. In 1936-1937 Taranto went through a significant refit, where the two fore boilers, and their accompanying funnel, were removed (power was reduced to 13,000 shp, for a top speed of 21 knots), and the torpedoes were removed. A pair of twin Breda 13.2mm heavy machine guns were fitted for anti-air defense. This was her condition upon entry into the Second World War.

Though assigned to the High Seas Fleet, her first major task took her overseas, as escort to the Kaiser-class battleships Kaiser and König Albert. The mission, intended to test the reliability of the turbine propulsion system installed on the battleships, departed Germany in December 1913 and visited ports along German West Africa, before crossing the Atlantic for visits along the South American seaboard, including the Pacific side. The trio returned to Germany on 17 June 1914, whereupon Strassburg was re-assigned to the HSF’s reconnaissance forces.

At the outbreak of WWI, she was used for reconnaissance and for backup to reconnaissance forces, and in this manner took part in the Battle of Heligoland Blight of 26 August. During the action she came across the badly damaged British cruiser Arethusa, but was driven off by British destroyers. When she made contact once more in company with the cruiser Cöln, succeeding in damaging three British destroyers, but they were forced to flee at the arrival of British battle cruisers, which ultimately sank Cöln. In December she took part in the Raid on Scarborough, Hartlepool and Whitby, and was able to escape the British via the terrible visibility that day. Next year, she was transferred to the Baltic, but saw little action until 1917. In October, during Operation Albion, she and two other light cruisers acted as covering forces for German minesweepers in the Gulf of Riga, and came under fire from 305mm shore batteries. She later took part in the Battle of Moon Sound, and aided in the bombardment of Kyno. In 1918 she re-joined the High Seas Fleet, as part of IV Scouting Group. In October, as the situation for Germany deteriorated, 45 men (about 10% of the crew) attempted to desert, and had to be captured and returned to their ship. However, then crews from all six cruisers of IV Scouting Group refused to work, which was followed soon after by the Wilhelmshaven and Kiel mutinies.

After WWI, Strassburg was briefly part of the post-war Reichsmarine, before being transferred to Italy in 1920 as a war prize. She arrived on 2 November 1920, and was refurbished before entering service with the Regia Marina, commissioned as scout Taranto on 2 June 1925. Initially assigned to the Light Division, on 1 December 1925 she was assigned to the 1st Division of the Scout Fleet. On 3 May 1926 she was deployed abroad in colonial service, sent to the Red Sea. On 24 May, she replaced the colonial cruiser Campania as flagship of the Indian Ocean squadron, and sent much of her time on patrol and helping to suppress rebels in Somalia. On 6 December 1926 Taranto was relieved by Lussin, and returned to Taranto on 27 January 1927. She was put into the reserve division of the 2nd Fleet while she was undergoing refit and maintenance, which lasted until September, and afterwards was assigned to 2nd Fleet’s scouting division. From 15 March 1928 to 1 October 1929, she was assigned to the Scout Division of the 1st Fleet, during which she also conducted a cruise around the western Mediterranean and into the Atlantic.

On 16 July 1931 Taranto became the flagship of the fourth division, now classed as a cruiser, and patrolled around Greek waters. On 1 July 1932, she fell under the jurisdiction of the Naval Mechanic School at Venice, conducting a cruise around the Adriatic. On 1 September she left this assignment, and on the 11th was put into the naval reserve force. In 1934 she served as the seat of the Inspector of Submarines, and embarked on a cruise with them, though in 1935 she was released from this task and deployed to the Red Sea and Indian Ocean stations once more in September 1935. She returned from this task in August 1936, and immediately was put into the major refit described above in the design section. After returning to service in 1938, she spent much of her time in the Adriatic and Ionian seas under the authority of the local naval department.

On 10 June 1940, when Italy entered the Second World War, Taranto was stationed in Brindisi, and began undertaking minelaying missions. For much of the war through to 1941, she operated in the Adriatic and Ionian Seas, providing fire support against Yugoslav and Greek forces and supporting various operations. In the summer she was assigned to the Forza Navale Speciale (Special Naval Forces) alongside several other older warships. She was sent to La Spezia in August for various works, where she received an increased anti-aircraft battery (two twin 20mm AA mounts and three more twin 13.2mm complexes). She moved to Livorno on 26 February 1942, beginning training for the planned role of the FNS in the invasion of Malta (Operazione C.3), but with the cancellation of the operation she was reduced to a training ship, and put into reserve in December.

After the Armistice of Cassibile on 8 September 1943, there was a very real risk of Taranto being captured by German troops, as she was not in condition to sail. Thus, on 9 September 1943, the crew of Taranto elected to scuttle the cruiser, to prevent it from falling into German hands. The Germans attempted to re-float the ship in the hopes of using her as a blockship, but an Allied airstrike sunk her again on 23 October. The Germans once again attempted to raise her for use as a blockship, but she was sunk for a third time by Allied bombers on 23 September 1944. After the war, Taranto was raised once more, and struck from the naval register on 27 March 1947. She was broken up for scrap shortly afterwards. During the Second World War, she had only conducted 11 official war missions, six for laying mines, and five for various actions, amounting to only 4,420 miles steamed in these roles.

Ships of Italy
Cruisers
Retrieved from "http://wiki.wargaming.net/en/index.php?title=Ship:Taranto&oldid=305151"
Categories:
Your location:
To log in, select the region where your account is registered
CIS Europe North America Asia Republic of Korea
Or use Microsoft Login to enter WoT XBOX ecosystem
Log in