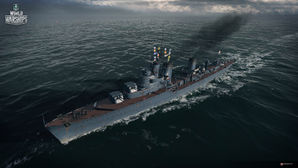 A destroyer flotilla leader intended to perform long-range reconnaissance duties within squadrons and support destroyers' torpedo attacks. She was built in Italy for the U.S.S.R. Navy (Project 20I). During World War II, she was one of the fastest warships in the world and the largest ship of this type.

Nicknamed "The Blue Cruiser" despite being a destroyer due to her being larger than a contemporary destroyer and alluding to her historical paint being Cobalt Blue, the Tashkent was much maligned in her previous Tier VIII incarnation. Fortunately, the Tashkent received a package of buffs resulting in a quite serviceable ship even at her new home at Tier IX.

Tashkent retains the excellent guns and speed of Kiev, and, while significantly larger and less maneuverable than Kiev, her generous hit point pool and edge in range (up to 15.2 km with module and Advanced Firing Training) goes a long way towards making up for it. On the offensive side, fast-reloading torpedoes and access to the last upgrade slot are welcome advantages.

As with the Kiev, the Tashkent can replace her Smoke Generator

. Both are viable; while the value of smoke in getting out of bad situations and supporting the team is obvious, the sheer longevity provided by Repair Party cannot be denied either.

In contrast to the traditional destroyer role, Tashkent should primarily be played at long range, where enemies will have trouble hitting it despite its large size, while the Tashkent’s high-velocity guns can still hit the enemy. That said, Tashkent will still often find herself pressed into more traditional destroyerly duties such as screening, baiting, and capturing points when there are no better ships available for the job. Here her torpedoes should not be ignored; while they are merely mediocre, they reload quickly, making them a good option for preemptively firing into chokepoints or smoke whenever an opportunity presents itself.

The Tashkent has four modules to research. The main battery or the hull should be researched first. If researching main battery the traverse speed of the turrets will be doubled. As an always moving, always dodging shots destroyer, traverse to fight back is very important. The hull is an upgrade as equally important for the survivability of the boat on the long term in battles, as the un-upgraded rudder shift is even more painful than missing the last 10% of range, not to mention the other benefits of the hull upgrade. The range should be researched third, and then finally the torpedoes.

The recommended upgrades for Tashkent are as follows:

) signal equipped are encouraged to replace the Engine Room Protection upgrade, as it extends the Engine Boost

Tashkent is a gunboat destroyer through and through. Therefore, skills boosting her gunnery are much appreciated.

Tashkent can equip the following consumables:

As with the Kiev the second slot will really define how the captain plays this ship. The smoke provides the standard utility of team cover, retreating, and smoke firing. However repair offers a unique playstyle giving captains a survivability increase to assist their gun-fighting capabilities.

Since Tashkent is a gunboat destroyer with excellent fire starting guns, flags such as Victor Lima (

) are great for boosting the fire starting capabilities of the ship. Alongside them, the Juliet Charlie flag (

) is great for keeping the ship from having a quick trip back to port due to a detonation. Sierra Mike (

) is a great choice for assisting the ship in dodging incoming shells, as this increases her speed.

The Tashkent class was a planned series of 10 destroyer leaders built by the Italian company Oto Melara for the Soviet navy. Due to the outbreak of WWII, only the first ship, Tashkent, was constructed. She served in the Black Sea fleet for three years before being crippled by dive bombers. Her turrets were salvaged and transferred to Ognevoi.

Ships of U.S.S.R.
Destroyers
Retrieved from "http://wiki.wargaming.net/en/index.php?title=Ship:Tashkent&oldid=322909"
Categories:
Your location:
To log in, select the region where your account is registered
CIS Europe North America Asia
Or use Microsoft Login to enter WoT XBOX ecosystem
Log in