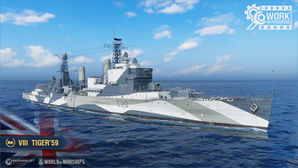 One of the last artillery cruisers of the Royal Navy, armed with the most advanced and powerful guns that Great Britain had at its disposal in the 1950s.

Tiger '59 is a Tier VIII premium cruiser in the British lineup.

The main armament consists of two twin turrets with auto-loading 152mm guns. While Tiger '59 reloads very fast, the low barrel count results in her having a below average dpm. To make matters worse, the arrangement in two turret means that a incapacitated or destroyed turret cuts her damage output in half. Lacking torpedoes means that Tiger '59 has no tool to deal high Alpha damage, forcing her to rely on damage over time via the AP shells. Fortunately, her AP shells come with improved ricochet angles and fuze settings, making her damage output against soft targets like destroyers or superstructures very consistent.

In terms of survivability Tiger '59 is a mixed bag. She features an above water citadel which is largely un-overmatchable, and unlike Edinburgh her hull plating is 25mm, allowing her to ricochet shells up to 356mm and to shatter most destroyer-grade HE shells. Her health pool is the second-lowest of the Tier VIII cruisers, leaving her especially vulnerable to high Alpha strikes like torpedoes or battleship fire. Being a British light cruiser however Tiger '59 comes with the Damage Repair consumable. The improved Specialized Repair Teams

consumables allows Tiger '59 to heal back large amounts of health. Regular penetrating hits can be fully healed, and even citadel hits get repaired by 50%. This makes Tiger '59 very resilient against shellfire when angled, even if she does take large amounts of damage, provided the rate at which the damage taken does not the exceed the rate at which it can be repaired.

The maneuverability of Tiger '59 is second to none compared to her counterparts, with a tight turning circle and improved acceleration. The only downside being the low top speed of only 30kn, Tiger '59 will have to be careful when picking direct confrontations as the ability to gain distance will be hampered especially while maneuvering.

For the playstyle Tiger '59 should aim at making the most of her advantages while avoiding open 1 vs 1 engagements. Access to the Smoke Generator

and the Surveillance Radar

consumables allows Tiger '59 to break line of sight and temporarily gain vision on targets. Ideally however she uses spotting by her teammates, saving the Surveillance Radar for destroyers. While in a Smoke Screen Tiger '59 must be very careful regarding nearby ships, as she has no means of quickly disposing off a rushing destroyer and the absence of Hydroacoustic Search

makes her vulnerable against torpedoes.

As a premium ship, Tiger '59 has no upgrades to research.

Tiger '59 lacks the typical radar cruiser ability to be a DD hunter/killer. When she radars a destroyer, her low damage per minute (DPM) makes it difficult to destroy it. Further, the low DPM and lack of hydro makes it difficult to defend against sudden offensive action by the target. Thus, Tiger '59 needs friends. She can find targets, but she needs friends to reliably kill them, and to help defend her.

Build her for Support roles. Beyond improving her radar and concealment, buffing her offensive capabilities won't make much difference. Instead, an Anti-Aircraft build may be the best. No, Tiger '59 doesn't have great AA, but what she has can combine with that of her friends to make her (and them) an uninviting and costly target.

The recommended upgrades for Tiger '59 are:

If one lacks the Surveillance Radar Modification 1 module, it can be replaced by Engine Room Protection

As a premium ship, Tiger '59 comes with Type 10 camouflage that lowers her detection radius, reduces the accuracy of incoming shells, reduces her service cost, and increases the amount of experience she earns.

Initially, Tiger was laid down as a Swiftsure-class light cruiser, a wartime design meant to increase stability, operational range (via increased fuel capacity) and anti-aircraft defenses versus the preceding Crown Colony (Fiji)-class light cruisers. However, due to strained resources, and other projects receiving higher priority, construction was slow, and as such only the members of the class laid down in 1941 (Swiftsure, Minotaur, Superb) were completed as intended from 1944 to 1945.

The next trio in the class, all laid down in 1942 (Tiger, Lion, Blake) were all launched in 1944/45, but languished after the end of the war, while various ideas were debated in regards to how they should be completed, given the original design was now obsolete. In 1951, the decision was finally reached to complete them as anti-aircraft cruiser, centered around the 6”/50 QF Mark N5 dual-purpose guns. Though dimensionally not much different from the original Swiftsure-class, the Tiger-class cruisers displaced considerably more, by 665 tons at standard load. Overall, machinery and armor protection saw little in the way of change, and endurance and top speed remained largely the same. However, armament changed radically. While the Swiftsure-class embarked a variety of weapon systems – nine 6”/50 Mk.XIII, ten 4” AA guns, 40mm and 20mm AA guns, and a pair of 21” triple torpedo banks - the Tiger-class only carried two gun systems.

The first of these was the 6”/50 QF Mark N5, four guns in two Mk.26 twin mounts. These were high-rate of fire weapons (15-20 rpm) in power-operated turrets with rapid elevation and traverse rates (40°/sec train rate), and capable of high-angle elevation (+78.5°) for anti-aircraft work. Backing them up was the medium anti-aircraft armament – six 3”/70 QF Mark N1 in three Mk.6 twin mounts. Each gun was capable of 70-90 rpm, an impressively high rate of fire for the era. Each gun mount was controlled by a MRS 3 director (five total), each of which was fitted with a Type 903 fire control radar. For surface search a Type 992Q radar was installed on the foremast, while for air surveillance a Type 960 search radar and Type 277Q height-finding radar were installed on the mainmast. Six 40mm/70 Bofors anti-aircraft cannons in three Mk.11 twin mounts were intended to supplement the 3”/70, but this installation was cancelled in 1957 in order to allow more spacious and comfortable crew quarters. Royal Navy adoption of the 40mm/70 Bofors was cancelled in favor of developing the Seacat missile, which could itself eventually be fitted to Tiger.

Unfortunately, both gun systems had major reliability issues in service, similar to their American counterparts on the Worchester-class. With sufficient maintenance, the 6”/50 QF Mk.N5 was mostly reliable, but this was very intensive and constant maintenance. The 3” guns were of greater concern, as their maximum service rate of fire fell well below the planned 120 rpm, and jams were constant.

The design of Tiger was radically revised when she was rebuilt as a helicopter cruiser in the late 1960s. Her aft 6” mount and the aft 3” mounts were both removed, along with one of the MRS 3 directors, and the rear of the ship rebuilt to accommodate a flight deck and hangar for four helicopters (the Westland Wessex, a license-built version of the Sikorsky H-34). Two Seacat GWS.22 quadruple mounts were fitted aft, providing the ship with anti-aircraft defense in the former of surface-to-air missiles. Guidance was provided, conveniently, by the MRS 3 directors. Alongside the change in armament came an update to the air search and height-finding radars, being replaced with the Type 965M and Type 278 respectively. Thanks to enhanced C3 capabilities (Command, Control & Communication), she was also particularly well suited to acting as a flagship.

HMS Tiger was laid down on 1 October 1941 at the John Brown Shipyard, but due to reduced priority and wartime constraints, was ultimately not launched until after the end of the war, on 25 October 1945. She languished for a decade before serious work on completing her began, so ultimately she did not commission until 18 March 1959 – almost twenty years after being laid down.

Due to the reliability issues present in her armament, much of the initial service life of Tiger was spent on trials, and even after this her operational ability was hampered due to personnel shortages. After a service life of barely seven years, she went into reserve (December 1966), and two years later began her conversion into a helicopter cruiser. This was completed only in 1972, and she recommissioned on 6 May 1972 after running over time and budget by a factor of almost three.

Due to financial constraints on the Royal Navy, especially in the face of the economic downturn of the late 1970s, and the high operating cost of the manpower-intensive vessel, Tiger was not long for the world even after this refit. Though she did take part in the Fleet Review for Queen Elizabeth II’s Silver Jubilee in 1977, the year after she was put into reserve and then finally decommissioned on 4 May 1979.

Ordinarily, this would have been the definitive end of the ship, but when the Falklands War erupted in April 1982, the key-to-be-scrapped Tiger got one last chance at life – she was considered suitable to recommission after a brief refit, being still in good material state, and having a desperately needed flight deck. However, with the painful losses to the Argentine and British fleets in May 1982, to submarine and air attack, the Royal Navy halted recommissioning efforts, due to the woeful state of the ship’s armament against modern air threats (the gun systems were already considered obsolete when the ship was commissioned in 1959, and Sea Cat was now twenty years old), combined with the fact it was judged likely that the war would end before Tiger’s restoration could b e completed anyway. When the conflict ended, so did any chance of her recommissioning, and Tiger languished for another four years until sold to a scrapping company in Spain. Work began in October 1986 - forty-five years after she had been first laid down. This was an impressive figure on paper, but ultimately she only spent about fourteen years in commission.

Ships of U.K.
Cruisers
Retrieved from "http://wiki.wargaming.net/en/index.php?title=Ship:Tiger_%2759&oldid=316930"
Categories:
Your location:
To log in, select the region where your account is registered
CIS Europe North America Asia
Or use Microsoft Login to enter WoT XBOX ecosystem
Log in