Homepage/
World of Warships/
Tirpitz B 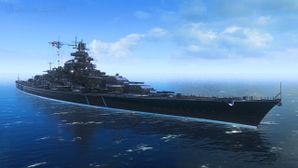 Tirpitz B was first released for sale on 29 November 2019.

Tirpitz B is a cosmetic variant of Tirpitz, otherwise identical in all regards. The following evaluation applies equally to both.

Tirpitz (B) is surprisingly flexible for a battleship and can be used as either a proper battleship or as an impromptu battlecruiser. Probably the most surprising thing players will find is that her main battery load time is about 26 seconds, which can be daunting to face. She also has torpedo tubes, useful for when cruisers or battleships get in too close or when the ship is able to work its way into melee range. Her 15-inch guns are the smallest BB guns on Tier VIII battleship (tied with her sister Bismarck), and have not only a high amount of dispersion when firing at maximum to extreme range but will find trouble punching through armor designed to protect against 16-inch shells. However, the smaller caliber means that shells are less likely to overpenetrate cruisers, and when combined with the good turret traverse and reload time (for a battleship), this can make Tirpitz excellent at clearing the battlefield of enemy cruisers.

With her handling characteristics, there are two primary ways to drive this ship: either joining the main wave as part of the battle line, or as the capital ship for a cruiser group that did not join the main line to form a flanking unit. One important thing to remember is that Tirpitz has fallen from its place as the top brawler at tier VIII, for a number of reasons. While still a daunting opponent, the addition of Bismarck means you can no longer be sure of beating anything at close range. With its equal secondary armament and access to Hydroacoustic Search, Bismarck is capable of outbrawling Tirpitz B &mdash until one recalls Tirpitz`torpedoes. At close range they are usually decisive.

As a premium ship, Tirpitz B doesn't have any upgrades to research.

Tirpitz B has access to five Upgrade Slots as a Tier VIII ship. Tirpitz B also has the option of building for Secondaries or for AA.

Secondary Battery Build: Following along with the theme of maximizing the punishment dished out by Tirpitz B’s secondaries, captains should invest in Basic Firing Training, Expert Marskman, Superintendent, and Advanced Firing Training. Manual Control for Secondary Armament is a strong skill in this build, but it only allows the ship's secondaries to fire at a single target at a time. Some captains will prefer this skill; others will not. Extra skill points should be invested in either Basics of Survivability, High Alert, or Vigilance, as desired.

Tirpitz B can equip the following consumables:

As a premium ship, Tirpitz B comes included with Type 10 camouflage that lowers her detection radius, reduces the accuracy of incoming shells, and increases the amount of experience she earns. 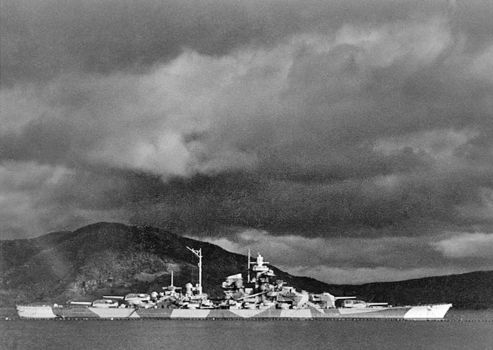 Ships of Germany
Battleships
Retrieved from "http://wiki.wargaming.net/en/index.php?title=Ship:Tirpitz_B&oldid=313910"
Categories:
Your location:
To log in, select the region where your account is registered
CIS Europe North America Asia Republic of Korea
Or use Microsoft Login to enter WoT XBOX ecosystem
Log in