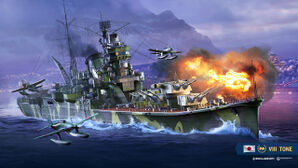 Tone is a unique class of ship being the lead ship of the Tone class. This hybrid cruiser carries main battery guns as well as armed floatplanes much like Ise. The main difference is that Ise is built upon a battlecruiser hull where Tone was purpose-built for this role. As such, the best comparison to her is that of her Tier VIII contemporary Atago.

Tone and Atago are both designed with 27mm bow and stern armor with 25mm plating running along the length of the ship. The main difference between Tone and her sisters is that her citadel sits much lower, making it harder to hit. Next, her citadel isn’t the traditional flat citadel found on her counterparts but the turtleback scheme that helps redirect shells with a shallow angle of incidence (closer range) away from her citadel. Lastly, Tone comes with four charges of the Repair party consumable by default which offsets the fact that at 38,900 hitpoints she has the fewest hp of the IJN cruisers at Tier VIII.

Tone is capable of sailing at 37.3kts, making her reasonably fast, and has a 780 meter turning radius. This makes her as fast as Atago and tighter turning by 10 meters. A major drawback is that her stock rudder shift time is 10 seconds, making her less responsive than her counterpart. This can limit her ability to “torpedo beat” or maneuver up close to threats. Of note to captains is that she is surprisingly stealthy. With a 10.1km surface detectability range, she falls more or less in the middle grounds of her same-tier counterparts. Among her same-tier IJN counterparts, however, she does sport the best detection radius of 6.2km when firing from smoke. At the same time, captains should be aware that she is far more detectable by aircraft than other cruisers of the tier with an assured aerial detection range of 6.7km.

On paper, having eight of the 203mm guns that the IJN cruisers are known for isn’t anything to blink at. Aside from being down a turret compared to other Tier VIII IJN cruisers, the main difference is that all of her guns are mounted forward. Despite this, Tone has strong firing angles that allow her to bring most of her guns to bear on a target without showing too much broadside which helps maintain her limited healthpool. Highly accurate and hard-hitting, these guns are able to readily deal with destroyers and cruisers that find themselves exposing their sides. Combine this with a high fire chance and a decent reload, and she can even be a serious threat to the larger battleships. Captains should avoid conflicts in which targets are bow on as this will limit the amount of firepower that she can bring to bear on the target. Notable is the fact that all but her forward-most turret are fully traversable, though this does come at the cost of having the slowest turret traverse speed of her IJN counterparts.

Despite being a hybrid ship, Tone does not gain any significant AA to write about. Focused around 25mm gun mounts, the majority of her AA firepower does not come into play until targets are within 2.5kms. Practically, this translates into a very limited damage output. While her guns are more than capable of contributing to a group's AA screen, she by herself will be unlikely to stop a dedicated attack against herself.

Captains will enjoy knowing she has the familiar type 90 Mod 1 torpedoes standard to the IJN cruisers at this tier. With a 10km range and a 62kt running speed, these torpedoes are a serious threat to any ship that is hit by them. The main distinction for Tone is that she only sports triple tubed launchers, which means fewer torpedoes per side despite having the same number of launchers. Furthermore, these launchers are mounted on the rear of the ship which can cause captains to show tremendous amounts of side to bring these torpedoes to bear on targets in front of her. In light of these setbacks, she does reload her torpedoes faster than her counterparts at 76 seconds base.

It is as a hybrid ship where Tone really stands out from her cruiser counterparts. She is equipped with M6A2 Floatplanes each armed with two torpedoes each. Captains initially have to wait for three minutes before they are able to launch any aircraft. Launched in a flight of four and utilizing rocket boosters, these planes are initially very quick. But once the boosters run out, they fall away from the aircraft, and the average speed decreases to 135 knots cruising or 155 with the regular boost feature. When attacking, all of the planes in the flight engage, which provides an ‘all or nothing’ aspect. Differing from ship-launched torpedoes, these aerial torpedoes are very slow at 35 knts so captains should get in close and lead the target to get as many hits as possible. This is very key as, at best, these torpedoes only deal 2767 damage each and this is prior to factoring in torpedo protection.

Captains should not focus on their planes for dealing the majority of their damage. Unlike in regular carriers, captains do not need to worry about running out of aircraft mid-battle but they do deal with a 3 minute cooldown between launches. Much like with the other hybrid Ise, this countdown begins as soon as the aircraft are launched. Ise, despite having the exact same type and number of planes, has slower aircraft than Tone.

Tone is a second line ship and should not be overly aggressive and push alone. Instead, captains should take their time and make use of their planes to scout where the enemy is going and provide intel. Towards the middle and end of the battle is where she shines the most. Captains would be advised to play the Tone at ranges of 10-15kms to maximize her diverse platform of weaponry. Based on her armor, kiting away from an enemy creates a smaller target for enemies to shoot and increases the chance of ricochets. With her turtleback citadel, shots that do connect are more likely to avoid doing max damage because of the armor's slope. All the while, she can return fire with her strong main battery and rely on the accuracy and high fire chance to deal with targets from afar. While kiting away, it is safer and easier to bring her four torpedo launchers to bear on a target.

Towards the end of the battle, captains can be more aggressive with their approach. This is when captains can more safely put their ship on auto pilot to use her torpedo planes to sink low health enemies. Having preserved health early on, captains should hopefully have the majority of their Repair Party consumables remaining and can go blow for blow with enemy cruisers and destroyers while taking care to angle in and maintain distance.

As a premium ship, Tone has no upgrades to research.

Notice that no Aircraft skills apply to Tone.

As a premium ship, Tone comes with Default permanent camouflage and a set of permanent combat bonuses.

Ships of Japan
Cruisers
Retrieved from "http://wiki.wargaming.net/en/index.php?title=Ship:Tone&oldid=322928"
Categories:
Your location:
To log in, select the region where your account is registered
CIS Europe North America Asia
Or use Microsoft Login to enter WoT XBOX ecosystem
Log in