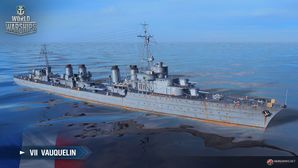 A further development of the large destroyer sub-type (French "contre-torpilleurs"). In contrast to the Guépard class, she featured artillery with enhanced rapid-firing capabilities. Additionally, as opposed to the Aigle class, she had her torpedo armament arranged in a different manner, providing wider rotation angles for her torpedo tubes.

Vauquelin is the stereotypical French destroyer with a high health pool, high speed, 139mm guns, 8 km torpedoes, no smoke, and Main Battery Reload Booster (MBRB). By this point, players should more or less know what to expect from a high-tiered French destroyer. Vauquelin's B hull has a health pool of 18,100 HP that is bested only by the Premium destroyer Z-39. Furthermore, she continues the French tradition of speed; with Engine Boost and the Sierra Mike signal flag, Vauquelin reaches up to an admirable 45.0 knots. Though this is the same as her predecessor, only 2 destroyers at Tier VII - Minsk and Leningrad - can surpass 45 knots. Despite these positive traits, Vauquelin is initially only a modest enhancement of her predecessor. Vauquelin's A hull comes with 5 guns slightly improved over Tier VI Guépard's and 7 torpedoes not improved over Tier V Jaguar's. This corresponds to a nonexistent increase in guns and a 1 tube increase in torpedoes. But, equipping a larger number of guns and torpedoes is not the only approach to designing a more powerful warship.

Vauquelin's torpedoes are arranged atypically. Instead of mounting all 7 tubes on the centerline, a single double torpedo tube launcher is found on each side of the ship with the remaining triple launcher in a centerline space. This configuration is similar to the same-tiered destroyer Mahan and noticeably improves Vauquelin's torpedo arcs over all preceding French destroyers. A drawback of this peculiar positioning is that, short of turning the ship, captains may fire only 5 torpedoes in a full broadside. This is underwhelming compared to Tier VII destroyers that have an extensive focus on torpedoes and even some that do not. Nonetheless, Vauquelin's torpedoes hurt enough to force the enemy to think before they act and the 68 knot speed, behind only Skåne's researchable torpedoes, is not to be underestimated by fellow combatants. Vauquelin's B hull converts the two double launchers to triple launchers. This useful upgrade increases her torpedo armament to a not insubstantial total of 9 torpedo tubes.

As with her torpedoes, Vauquelin also has an improved gun firing arc toward the bow. This allows captains to better utilize Vauquelin's theoretical capabilities in practice. Though she packs 5 guns just like her predecessor, her guns turn faster by 2°/s and reload faster by 0.6 seconds for a 10°/s turret traverse speed and 5 second reload time. Neither attribute is exceptional and Vauquelin ranks middle of the pack for both. Vauquelin stands out with her 4 base charges of MBRB. Vauquelin's 5 guns do good damage per shell and even without MBRB, Vauquelin has a highly competitive damage per minute that exceeds even some artillery-focused destroyers such as Leberecht Maass. For the remaining enemy destroyers Vauquelin cannot out-damage, she can out-tank them thanks to her larger health pool. In these intense duels, the race to deal damage is closely contested and the aim of both captains will factor into the end result. Unsurprisingly, no enemy destroyer has even close to Vauquelin's shell and damage output for the 15 seconds MBRB is active. During this period, Vauquelin is competitive against even Tier VIII destroyers as fabled as Akizuki though a short 15 second encounter may not provide enough time to sink previously undamaged destroyers. The only respite for same- or lower-tiered enemy destroyers is to take advantage of Vauquelin's fairly high (though common at her tier) base detectability range of 7.56 km and (uncommon at her tier) lack of smoke. The inability to generate a smoke screen may encourage captains to adopt a mid- to long-range playstyle, for which harassing enemy cruisers and battleships is also safer.

Vauquelin truly is a capable, versatile ship. She is a gunboat at heart with torpedoes as either an offensive weapon or a defensive deterrent depending on personal preference. In contrast, her successor has just 300 more HP and trades 20% of Vauquelin's main battery DPM for 10% faster torpedoes with a 25% higher maximum damage. Captains who prefer active actions without smoke as a crutch will adapt well to Vauquelin.

Availability of researchable upgrades for Vauquelin is as follows:

It is recommended for captains to first research the Hull upgrade for an additional 3,000 HP on Vauquelin. Captains may decide to then proceed immediately to the next ship on the tech tree, Le Fantasque. Alternatively, captains may research the PCA n° 7 Mle 2 upgrade for a 10% increase to Vauquelin's already large main battery range.

The recommended upgrades for Vauquelin are as follows:

can be equipped to increase Guépard's torpedo speed by 3.4 knots to 71.4 knots.

is another option for faster acceleration.

The French destroyer Vauquelin was the lead ship of her class of destroyers (contre-torpilleurs) built for the French Navy during the 1930s.

After France surrendered to Germany in June 1940 during World War II, Vauquelin served with the navy of Vichy France. She was among the ships of the French fleet scuttled at Toulon, France, on 27 November 1942.

The Vauquelin-class was largely a repeat of the prior Aigle-class, which had remained generally similar to the Guépard-class, though major improvements had been incorporated. As a result, destroyers of the Aigle and Vauquelin-classes were slightly heavier. The main difference was the machinery, and although it gave the same power as the prior class, was much more robust and reliable than what had equipped the Guépard-class. Fuel economy was also improved, and the improved hull form allowed for an increase in top speed to 36 knots, despite machinery power not increasing.

Firepower also increased despite using an identical number of guns of the same caliber. The new 138.6mm/40 Mle 1927 replaced the old Mle 1923, and was based on the German 15cm Tbts KL/45 used by Kaiserliche Marine destroyers in WWI. This gun had incorporated a German-style sliding breech, a major improvement over the Welin interrupted screw breech. This greatly reduced the firing cycle, down to a theoretical 5 seconds (12 rounds per minute). Additionally, the height of the trunnions was lowered by nine centimeters, making it easier top load the gun at lower elevations. This had the unfortunate affect of lowering the maximum elevation to only +28°, and thus maximum ballistic range to 16,600 meters, but the French reasoned this gave little loss since the gunnery of these types of ships was generally limited to 13,000 meters at best. This being said, the difficulty in manually handling the shells and charges remained, and likewise hoist capacity – 20 rounds per minute for each of the two hoists (one fore, one aft) – had not improved over the prior classes. While this had been more than enough for the 138.6/40 Mle 1923, this meant that the sustained rate of fire of the destroyers was limited to 10 rpm, assuming the amidships gun (no.3) was not fed. Thus, the destroyers became more reliant on the ready racks (24 round each save for no.3, which had 48 rounds) for their initial fire, and less inclined to sustained combat, where rate of fire was limited to around 8 rpm.

Fire control of the Vauquelin was improved over Aigle, incorporating a better 3-meter stereoscopic rangefinder (still no director) and an improved Mle 1929 fire control computer, which transmitted both train and elevation data to the guns via a FTP system (versus only train angle with the prior Mle 1923).

Anti-aircraft firepower remained the same, and torpedoes remained the same – but torpedo tube positioning changed. The aft triple bank remained where it was (using a new Mle 1928T mount), but the forward triple bank was deleted in favor of a pair of twin mounts (Mle 1928D), one on each side, which overall had much better angles of fire than the old triple mount (a 140° arc versus a 60° arc).

The final major difference was the optimization for minelaying of the Vauqeulin-class, which featured a modified stern shape for minelaying, and greater mine capacity (increasing from 20 to 50 compared to prior classes).

Overall, the class represented a significant improvement over the Aigle-class, and were much better than the Guépard-class. They had much more reliable machinery despite maintaining just as high a speed, and were overall more durable. Their effective firepower increased with their faster-firing guns, and their fire control system was overall better than any contre-torpilleur that preceded them. They were considered to be very stable ships, making them good gunnery platforms – although high wind affected them greatly due to their high silhouette and slim hull form, an issue common to all contre-torpilleurs. Likewise, this also caused them to turn very poorly, which was also common to all contre-torpilleurs. Although these issues detracted from their performance, as did their poor air defense and lack of effective anti-submarine warfare equipment (namely a lack of means to detect enemy submarines), they represented a generally very successful evolution of the contre-torpilleur design that had started with the Jaguar-class.

Ships of France
Destroyers
Retrieved from "http://wiki.wargaming.net/en/index.php?title=Ship:Vauquelin&oldid=318529"
Categories:
Your location:
To log in, select the region where your account is registered
CIS Europe North America Asia
Or use Microsoft Login to enter WoT XBOX ecosystem
Log in