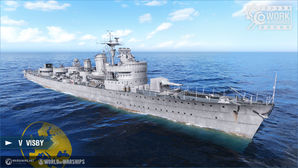 A further development of the "standard" destroyers of the Swedish Navy. The ship was faster than her predecessors, had a different main-gun-mount arrangement, and carried reinforced anti-aircraft armament.

consumable, as well as improved AA defenses. Because of this, her playstyle will also reflect that of higher tier European destroyers.

In terms of firepower, Visby features many of the trademark European destroyer torpedo characteristics, including quick reloading time, and low alpha damage. They have a long range of 8km, which is the highest at Tier V. While Visby does not have insanely fast torpedoes like other European destroyers, their speed of 65 knots is some of the highest at her tier. The quick reload time of just 55 seconds allows Visby to effectively strike enemies, as well as deny areas well. On the other hand, Visby’s guns are somewhat lackluster. Having only 5 guns with a long reload time, her DPM is quite weak when compared to the likes of Jaguar or Nicholas. Additionally, Visby's turret traverse is very slow, making close range engagements exceedingly difficult. Because of this, Visby captains should avoid close range fights against other destroyers.

A major weakness of Visby is her low HP pool of 9,600, which is by far the lowest at her tier. This is partially made up for by her Repair Party

consumable, but her susceptibility to quick burst damage, and lack of a Smoke Generator

to disengage means that Visby should avoid gunfights against more heavily armed enemies. Even with the extra HP provided by her heal, she still has less health than some Tier V destroyers. From longer ranges, Visby can make use of her excellent maneuverability to evade damage. At 39 knots, she is the second fastest Tier V destroyer, and interestingly the fastest European destroyer in the line. Her quick rudder shift time of just 2.5 seconds combined with her speed and tight turning circle make it easy for Visby to weave in and out of enemy fire at longer ranges.

Visby has a mediocre concealment of 6.6 km, which limits her ability to fight enemy destroyers. Her gun power and health is not enough to win close range fights when she is outspotted by many other destroyers at her tier. In terms of AA power, Visby has an excellent suite of AA for Tier V destroyers. However, this improved AA will most likely not be enough to prevent a Tier VI or even a Tier IV carrier from striking her.

Taking all her characteristics into account, captains of Visby should focus on taking longer range engagements, using her torpedoes and stealth to her advantage. Players should be cautious when using guns, as her low health pool can mean a quick death for being spotted in a vulnerable position. Her long turret traverse and lack of Smoke Generator

means that Visby players should avoid fighting against enemy destroyers for key areas at the beginning of a match.

Availability of researchable upgrades for Visby is as follows:

The recommended upgrades for Visby are as follows:

Visby can equip the following consumables:

Ships of Europe
Destroyers
Retrieved from "http://wiki.wargaming.net/en/index.php?title=Ship:Visby&oldid=317556"
Categories:
Your location:
To log in, select the region where your account is registered
CIS Europe North America Asia
Or use Microsoft Login to enter WoT XBOX ecosystem
Log in