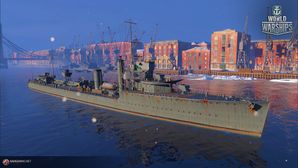 A W-class destroyer of the Admiralty project, a next step in the development of the V-class destroyer flotilla leaders. She was armed with triple torpedo tubes. One of the variants of her modernization assumed strengthening of her artillery by shifting to 120 mm main battery guns.

Availability of researchable upgrades for Wakeful is as follows:

The recommended upgrades for Wakeful are as follows:

Wakeful can equip the following consumables: 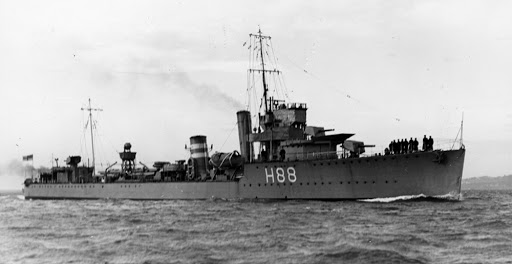 HMS Wakeful was a W-class destroyer of the Royal Navy. She was built under the 1916-17 Program in the 10th Destroyer order. Wakeful was assigned to the Grand Fleet after completion, and served into the early years of the Second World War. Wakeful was torpedoed and sunk during Operation Dynamo by a German E-Boat on 29 May 1940.

Ships of U.K.
Destroyers
Retrieved from "http://wiki.wargaming.net/en/index.php?title=Ship:Wakeful&oldid=322019"
Categories:
Your location:
To log in, select the region where your account is registered
CIS Europe North America Asia
Or use Microsoft Login to enter WoT XBOX ecosystem
Log in