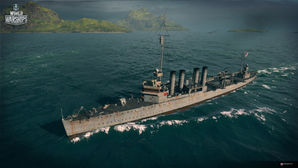 At first glance, Wickes might appear a downgrade from Sampson, particularly given her low health pool. While she is slightly more fragile than her predecessor, she makes up for it by retaining Sampson’s handling characteristics while gaining about 5 knots worth of top speed.

More importantly than that, Wickes moves up from Sampson’s twin double-tube launchers on each side of the ship to twin triple-tube launchers. Combined with the better damage from her upgraded Torpedo module, it is a huge increase in firepower. Wickes is a tremendous threat to enemy capital ships she's allowed to close with; however, now she can simply wipe them out with a single well-aimed salvo of torpedoes as opposed to Sampson’s steady "death by a thousand cuts" method. Her main battery is virtually unchanged from Sampson; the guns are the same, and she retains the unusual gun placement that prevents her from getting more than three barrels on target at once.

Overall, Wickes packs more firepower into a hull that is just as fragile as her predecessor, while continuing to encourage clever positioning and sneak attacks from behind cover in order to maximize damage from her deadly torpedo armament.

Availability of researchable upgrades for Wickes is as follows:

In an odd twist for American destroyers, the best place to spend initial experience gains in Wickes is in the upgraded Torpedo module. Hull (B) provides a smidgeon more health and should be taken next. The Fire Control System module upgrade to boost her gun range can be saved for last.

The recommended upgrades for Wickes are as follows:

Wickes can equip the following consumables:

Both torpedo banks (4x3) landed, replaced with stowage for 80 mines.

Ships of U.S.A.
Destroyers
Retrieved from "http://wiki.wargaming.net/en/index.php?title=Ship:Wickes&oldid=313155"
Categories:
Your location:
To log in, select the region where your account is registered
CIS Europe North America Asia Republic of Korea
Or use Microsoft Login to enter WoT XBOX ecosystem
Log in