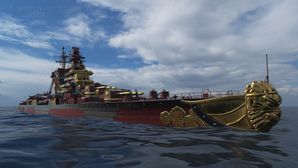 Wukong is the Monkey King and one of the main mythological characters in Chinese culture. He is an immortal demon who obtained extraordinary power after long years of wandering and spiritual perfection.

Wukong first became available as a mission reward on 24 January 2020 for the Lunar New Year event.

As a premium ship, Wukong doesn't have any upgrades to research.

The recommended upgrades for Wukong are as follows:

Wukong can equip the following consumables:

As a premium ship, Wukong comes included with Type XX camouflage that lowers her detection radius, reduces the accuracy of incoming shells, reduces her repair costs, and increases the amount of experience she earns.

Ships of Pan-Asia
Cruisers
Retrieved from "http://wiki.wargaming.net/en/index.php?title=Ship:Wukong&oldid=316905"
Categories:
Your location:
To log in, select the region where your account is registered
CIS Europe North America Asia
Or use Microsoft Login to enter WoT XBOX ecosystem
Log in