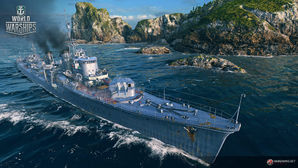 Yūgumo is penultimate destroyer in the "torpedo boat" branch of the Japanese tech. Captains who have progressed this far up the branch will be well-familiar with the layout of the ship, but will probably be disappointed in how few improvements there are over Tier VIII's Kagero lurking inside the hull.

One big improvement is the reload time of Yūgumo’s main battery guns. The reload time of her 127mm/50 Type3 guns is a mere 5.7 seconds; glacially slow by American destroyer standards, but a speed heretofore unseen with Japanese 127 mm guns. With the right mix of upgrades and commander skills that number can drop even lower, bringing her DPM close to a true gunboat, though she will still lack the raw DPM of American destroyers or the excellent ballistics of Russian destroyers. Her main battery range goes up significantly as well, further emphasizing the benefits of her improved reload speed. Her turret traverse is much improved, too, but a 22.8 second 180° traverse time is very much in keeping with the flavor of her predecessors.

Yūgumo has the option of two torpedo upgrades from the stock Type 93 mod. 2. The first upgrade is to Type F3 which is outrageously fast at 76 knots but at the cost of 2 km of range. The recommended choice, however, is the final upgrade — Type93 mod. 3, which remain at 67 knots but with a range of 12 km and a near-24K wallop. Most captains will choose the Torpedo Tubes Modification 1

that improves reload time to 97 seconds.

Most everything else remains as it was from Kagero. Her speed improves slightly (0.5 knots), and her handling characteristics remain virtually identical. Her main battery is now dual-purpose, but practically in name only; it does a better job giving away her presence to nearby planes than actually defending the ship and should generally be ordered to hold fire. Her health pool goes up by the slimmest of amounts (400 hit points). Even Yūgumo’s detection radius is worse than Kagero, but it's very slight and not a serious handicap.

Yūgumo is an excellent torpedo destroyer and her build should augment her best attributes.

Yugumo has two priorities: survival, and her torpedoes.

Yugumo can equip the following consumables:

Players who wish to spend doubloons can equip Yūgumo with Type 19 camouflage that lowers her detection radius, reduces the accuracy of incoming shells, reduces her repair costs, and increases the amount of experience she earns. 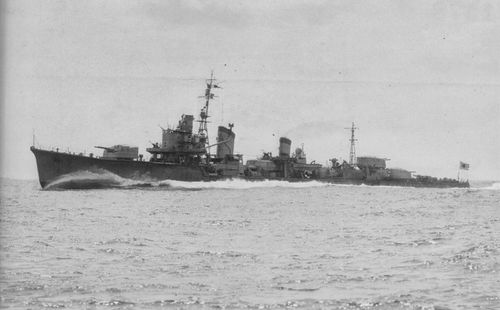 Yūgumo (夕雲?, "Evening Clouds") was the lead ship of her class of destroyer built for the Imperial Japanese Navy during World War II. Apart from the modified bridge structure — which reduced wind resistance and turbulence compared to the design on the Kagero-class — her class was visually indistinguishable from Kagero class vessels, and was otherwise very similar. These would be the final class of large anti-surface destroyer the Imperial Japanese Navy would produce.

Kazagumo was torpedoed and sunk by submarine on 8 June 1944.
Makigumo struck a mine and was sunk on 1 February 1943.
Yugumo was sunk by surface gunfire and torpedo on 7 October 1943, during the Battle of Vella Lavella.

Ships of Japan
Destroyers
Retrieved from "http://wiki.wargaming.net/en/index.php?title=Ship:Yūgumo&oldid=312624"
Categories:
Your location:
To log in, select the region where your account is registered
CIS Europe North America Asia Republic of Korea
Or use Microsoft Login to enter WoT XBOX ecosystem
Log in