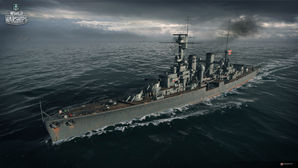 Owing to her well-balanced characteristics, the ship surpassed the first generation cruisers of her time, that were subject to the Washington Naval Treaty, in terms of protection, and light cruisers in terms of artillery power.

The first heavy cruiser of the German line, Yorck is a radical change from her predecessors at Tiers V and VI... so much so that she is often a badly maligned and misunderstood ship.

New Yorck captains will immediately notice the change in the main battery. Königsberg and Nürnberg both sport nine 150mm guns; Yorck’s battery is comprised of eight 210mm rifles. She fires twice as slowly as Nürnberg as well, which requires some adjustment. Her 210mm shells, however, have greatly improved damage performance over the 150mm ones of her predecessors. Yorck has the best HE shell performance of the entire German cruiser line with a base damage of 2,900 points and a 12% fire chance, while her AP performance is identical to those of the following German cruisers with a high damage but poor effectiveness against angled targets. The key to success while playing the Yorck lies with choosing the right type of ammunition, as both her HE and AP offer marked benefits. Her HE possesses improved penetration values, making shatters unlikely even against heavily armored enemies. Her AP has the best damage value at tier and is only marginally less potent than the AP ammunition used on the Tier X Hindenburg. With good ballistics both ammunition types are effective even at maximum range.

Yorck’s armor is somewhat better than Nürnberg, as befitting her heavy cruiser status. She is still prone to citadel hits when broadside, but is the first German cruiser to feature the turtleback armor scheme that makes them more difficult to citadel at medium and close range (particularly when well-angled against incoming fire).

In her stock configuration, Yorck finds herself with a default firing range equal to or longer than that of her American, British, and Japanese contemporaries (Pensacola, Fiji and Myoko, respectively). Only the French Algérie exceeds her 17.3km range when fully upgraded. Her anti-aircraft suite is solid if unremarkable; her quick rudder shift, small turning circle, and compact overall length combine to make her a difficult target for enemy bomber aircraft.

On the whole, Yorck is one of the better Tier VII cruisers available for captains and is a solid introduction to the German heavy cruiser play style that continues with the Tier VIII Admiral Hipper.

Availability of researchable upgrades for Yorck is as follows:

Given the range advantage that stock Yorck already enjoys, Hull (B) is the best place to invest initial experience gains. The extra health will improve her survivability greatly.

The recommended upgrades for Yorck are as follows:

Of all the cruisers in the German line, Yorck will benefit most from Demolition Expert at Level 3 given how frequently she will find herself firing HE shells. Expert Marksman is a must at Level 2, and Concealment Expert is highly recommended at Level 4.

Yorck can equip the following consumables:

Players who wish to spend doubloons can equip Yorck with Type 17 camouflage that lowers her detection radius, reduces the accuracy of incoming shells, reduces her repair costs, and increases the amount of experience she earns.

More than any other German cruiser, Yorck will benefit from Victor Lima (

) helps alleviate some of her deficiencies in top speed compared to her contemporaries, and Equal Speed Charlie London (

) will speed up the unlocking of upgraded modules and Admiral Hipper.

Yorck is derived from a series of conceptual sketches that eventually led to the Deutschland-class panzerschiffes of the Kriegsmarine. In these sketches, the Yorck is known as the Entwurf I/10. Her main armament size, 210mm, is unique among heavy cruisers as it is the same guns used on the SMS Blücher, the last armored cruiser built by the German Empire.

Her name, which was given to her by Wargaming, is shared with the second Roon-class armored cruiser SMS Yorck as they are both named for Prussian field marshal Ludwig Yorck von Wartenburg.

Ships of Germany
Cruisers
Retrieved from "http://wiki.wargaming.net/en/index.php?title=Ship:Yorck&oldid=313028"
Categories:
Your location:
To log in, select the region where your account is registered
CIS Europe North America Asia Republic of Korea
Or use Microsoft Login to enter WoT XBOX ecosystem
Log in