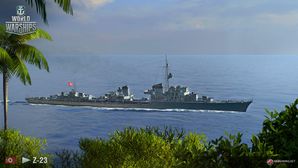 Developed from the Leberecht Maass-class destroyers (Zerstörer 1936A type), this ship had larger dimensions and greater firepower compared to her prototype. She received 128 mm main gun mounts, but retained the torpedo armament of her predecessor.

A solid upgrade to Leberecht Maass, Tier VIII's Z-23 is similar in broad strokes but sees incremental improvements in several key areas. Most welcome is the ability to take the concealment upgrade in the new upgrade slot, allowing her to reach a detection range of 6.2 km when combined with camouflage and the captain skill; still worse than most other destroyers, but at least closer to competitive. A slight downgrade in acceleration, rudder shift, and turning circle is compensated for by a meaty helping of 2,000 additional hit points.

In her stock configuration, Z-23 has exactly the same guns as Maass, but loses a gun. However, upon upgrading to the N-Hull Z-23 exchanges her forward single gun mount for a twin turret, bringing her gun count up to five guns.

Finally, the upgraded torpedoes pick up an extra kilometer of range, improving their flexibility. The 1-knot increase in speed is small but can only help as well.

All in all, like her predecessors Z-23 may not quite have the finesse of American or Japanese destroyers, but her durability, Hydroacoustic Search

, and balanced gun and torpedo armaments allow her to adapt to almost any circumstance.

Upgrade the hull first for a massive increase in survivability. Next, the upgraded torpedoes are more comfortable to use. Take the gun range last.

The recommended upgrades for Z-23 are as follows:

The choice of which Signal Flags to mount will confer to the individual preference of each captain, and are subject to great variation, although there are certain flags which suit Destroyer game play better. Captains should mount India Yankee to decrease time to extinguish fires, mount November Foxtrot to decrease reload time of consumables, and mount Sierra Mike to increase the ship's maximum speed. To make their torpedoes more potent, captains should mount Juliet Whisky Unaone to increase chance of causing flooding and Juliet Charlie to mitigate risk to magazine detonation from mounting the former flag. If captains wish to buff their primary artillery, they are encouraged to mount Victor Lima + India X-ray to increase fire chance to HE shells.

Ships of Germany
Destroyers
Retrieved from "http://wiki.wargaming.net/en/index.php?title=Ship:Z-23&oldid=321715"
Categories:
Your location:
To log in, select the region where your account is registered
CIS Europe North America Asia
Or use Microsoft Login to enter WoT XBOX ecosystem
Log in