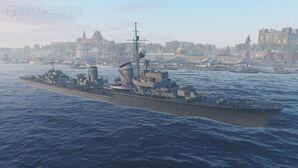 The lead ship is part of a subseries of the Type 1936A destroyers laid down after the outbreak of World War II (Type 1936A (Mob)). She carried 150 mm main battery guns.

Z-31 is a Tier VII German destroyer and the first ship in the alternative german destroyer line. It gains access to the trademark features of the line, including 150mm guns with high AP damage and improved riccochet angles (similar to Des Moines), as well as a large health pool and 25mm side plating to protect it from low caliber HE.

The recommended upgrades for Z-31:

The destroyers of the Zerstörer 1936A (Mob.) class were a class of destroyers that simplified the preceding class, the 1936A class, while keeping their general characteristics. This was done in order to reduce construction time during war time, hence the name, 1936A "Mobilisation" (mobilization).

The ships sported a 127 meter long and 12 meter wide hull with a draft of up to 4.65m. The displacement ranged between 2,600 and 3,700 tons depending on the loadout, and the engines — with a combined 70,000 shaft horsepower — would allow for a speed of 36 knots (during speed trials, speeds up to 38.5 knots were achieved). The fuel capacity gave these ships a cruising range of up to 2,500 nautical miles. The crew for a single vessel consisted of 11 officers and 320 men.

What made the 1936A (Mob.) class stand out from other destroyers of the era was their main battery armament. The 15cm L/48 was gun was unique to Germany, and the largest main battery rifle to be mounted on a destroyer to date. They were initially tested on the 1934-class destroyer Z-8 Bruno Heinemann, these guns were meant to counter new French and British destroyers, as well as allowing the 1936A (Mob.) class ships to serve as scout units and to compensate for the continual shortage of light cruisers and scouting units. There were two mountings available on the 1934A (Mob.) class, a single mount and a twin turret. Other than the number of guns in these mountings, they also differed in terms of gun elevations: the single mounting allowed for 30° elevations, whereas the twin turret could elevate up to 65°. Each ship of the Z-31 class was slated to receive one twin-barreled mount on the bow and three single-barreled mounts at the stern of the ship, with the sternmost two being superfiring and the central turret facing forward. The Torpedo armament did not change from the 1934 series destroyers, with two quadruple 533mm torpedo tubes, and the initial anti-aircraft armament consisted of two twin 37mm Flakzwilling 30's and five single barreled 20mm FlaK 38's.

Availability issues with the 15cm twin turret meant that the first unit of the class, Z-31, only received four 15cm guns in single mountings. However, even the lighter armament showed that the bow was insufficiently designed and that the ships took a tremendous amount of water over the bow in the commonly rough seas of the northern Atlantic. With the twin turret installed the issues with these guns became more noticeable. With the twin turret weighting more than four times that of a single mount, the fore ship was even more prone to being wet. As the turret was not properly designed to be waterproof the electrical systems within would often fail in heavy seas and the fixed ammunition meant that a lot of physical effort was required by the gun crews to reload the gun, which would hamper the ability to maintain a high rate of fire during combat.

With the threat from aircraft rising throughout the war, it was deemed as necessary to increase the anti-air-armament of all destroyers, resulting in the so-called “Barbara-program” which added additional AA guns for almost all ships in 1944. The proposed changes for the 1936A (Mob.) class ships were the removal of a 15cm single mount, and a completely new AA armament of twelve 37mm M42 and eighteen 20mm FlaK 38 guns, with the addition of 8.6cm AA rockets in four single launchers.

Z-31 was constructed as construction number 1001 at the Deschimag dockyard in Bremen. Shortly after being completed and while undergoing trial and exercise runs she collided with the motor boat Wilfried, causing damage to her outer hull and demanding a three week repair. Afterwards she escorted the heavy cruiser Lützow to Norway, where Z-31 would stay for the time being undertaking various escorting and mining operations. One of these missions would be the "Spitzbergen-raid", where she would be part of a German task force containing the battleships Tirpitz and Scharnhorst, attacking a Norwegian weather station. Initial return fire from shore batteries struck Z-31 eight times causing her first casualties of one dead and one wounded. Until the end of the year 1943 she would continue taking part in various operations in Norway before sailing back to Poland for an overhaul.

In August 1944, after completing her overhaul and being regaining combat readiness, Z-31 would return to Norway carrying technical personnel and materials for the damaged battleship Tirpitz. While staying with Tirpitz for air cover an air raid targeting the battleship would also hit Z-31, damaging her slightly. The following four months she would spend on further mine and escorting operations.

In January 1945 Z-31 together with her sister ships Z-34 and Z-38 returned home from Norway into the Baltic sea. However, British intelligence knew of this and sent two light cruisers, HMS Diadem and HMS Mauritius, to stop them. An engagement ensued, during which Z-31 would take seven hits, one of which penetrated her forward twin turret destroying it. The destroyers escaped into the safety of the coast line, receiving support from shore batteries. The damage on Z-31 was severe, of her 336 men strong crew 55 died and another 24 were wounded, and the entire foreship was wrecked. Z-34 and Z-38, being mostly undamaged, continued their trip to Germany. Z-31 being too heavily damaged made her way to Bergen and then to Oslo for repairs.

There her bow was repaired, but the 150mm twin turret being beyond repair and in lack of spares a 105mm/45 single dual purpose gun was installed. Her Barbara-refit was also added, exchanging the medium and small AA for a much improved suite of automatic 37mm and 20mm guns. In March 1945 she was fit to return to Poland, which she did.A few days afterwards, on March 23rd 1945, Z-31 towed the hulk of Gneisenau into the harbor entrance of Gotenhafen where she would be sunk as a block ship. The remainder of the war she would spend escorting the cruisers still afloat, and engaging land targets.

Ships of Germany
Destroyers
Retrieved from "http://wiki.wargaming.net/en/index.php?title=Ship:Z-31&oldid=322555"
Categories:
Your location:
To log in, select the region where your account is registered
CIS Europe North America Asia
Or use Microsoft Login to enter WoT XBOX ecosystem
Log in