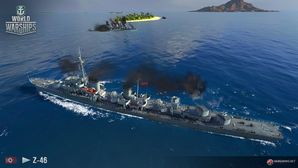 A well-balanced design for a destroyer (Zerstörer 1936C type), intended for operations on the high seas. Her major distinction from the preceding classes was her artillery armament, comprising of up-to-date and dual-purpose main battery turret mounts.

Sitting in the penultimate spot in the line, the Z-46 is one of the most well-rounded destroyers both at her tier and in her line.

One of the most noticable differences between Z-46 and her predecessors is her main battery arrangement, which now sports three twin gun turrets for a total of six guns. Although the guns are almost identical to those found on Z-23, the additional barrel provides a reasonable boost to firepower over her lower tier counterpart. Other upgrades in this area include the improved turret traverse rate of Z-46's twin turrets and a small increase to maximum range.

In addition to the improvements to the guns and turrets, the shells also see some minor improvements that are easy to overlook. The HE shells gain an additional 1% fire chance and the AP shells have better penetration, when compared to Z-23. Both shells also have shorter travel times, making them easier to use against fast or distant targets.

Curiously, like her bigger Tier IX compatriot Roon, her turrets are mounted in a aft-heavy A-XY configuration. This makes her more effective when being pursued than when being the pursuer.

Concealment also gets a solid boost, reaching 5.9 km with a full stealth build. This is a level not seen in the line since T-22 and is fully competitive with other destroyers she is likely to see.

Almost every other aspect sees smaller improvements. Her main guns are now dual purpose, acting as long-range AA, though the effects are generally unimpressive due to her lack of a Defensive AA Fire option. Her torpedoes see the usual small upgrade in speed and range; while their direct damage is by now rather mediocre for the tier, their fast reload rate is excellent for flooding enemy ships. She also has just the tiniest improvements in hit points, turning circle, speed, Hydroacoustic Search, and main battery range relative to Z-23.

The B hull will provide sorely needed improvements to hit points and rudder shift, and should be researched first. The other upgrades are fairly marginal, though the torpedoes are probably more versatile considering that the short duration of the smoke limits safe gunnery opportunities.

The recommended upgrades for Z-46 are as follows:

Z-46 can equip the following consumables:

Players who wish to spend doubloons can equip Z-46 with Type 19 camouflage that lowers her detection radius, reduces the accuracy of incoming shells, reduces her repair costs, and increases the amount of experience she earns.

The Zerstörer 1936C project was designed as an improvement of the Zerstörer 1936A Designs; commonly referred to as the “Narvik-class” destroyers. The emphasis of the new designs was an increase in the propulsion/seaworthiness and armament of the previous classes.

Project 1936C destroyers had the same propulsion that was seen on the previous destroyers: 2 Wagner geared turbines linked from 6 Wagner water tube boilers; each turbine connected to a shaft. Typical of Wagner turbines, they operated at 400ºC and 70atm. Unique to these systems, they have an atoms regulation system that tracked the levels of air and water in the reservoir, as well as the feeding of fuel and water into the boiler. This allowed the boiler to generate stable output, despite diverse working conditions. The steam was output into geared turbines, which would have the shaft run at different rotational speeds based on the pressure of the steam exerting the chamber; a more efficient and weight reducing design. The efficiency was further increased my having multiple injection tubes for the incoming steam. The overall system generated 70 000 horsepower. The design also called for the boilers and turbines to be housed in different compartments themselves were separated by more compartments in order to increase survivability of the system.

The Project 1936C destroyers were to be armed with 128mm guns based of the FlaK 42, albeit at a shorter 45 calibers. The twin gun mounts housed in turrets allowed for a total elevation of +52º. Furthermore, the project was to mount six 37mm and six 20mm AA guns. Clearly, a major goal for this improved design was to have adequate anti-air capabilities that were lacking on the previous iterations. She didn’t have to sacrifice her torpedo armament for this, as she carried the same two quadruple torpedo mounts seen on her predecessors.

A. G. Weser planned the constructions of five ships for 1942 - 1943 at Bremen, Germany. The construction of Z-46 and Z-47 was started, but the project was halted, and later scrapped, due to British bombing.

Ships of Germany
Destroyers
Retrieved from "http://wiki.wargaming.net/en/index.php?title=Ship:Z-46&oldid=316669"
Categories:
Your location:
To log in, select the region where your account is registered
CIS Europe North America Asia
Or use Microsoft Login to enter WoT XBOX ecosystem
Log in