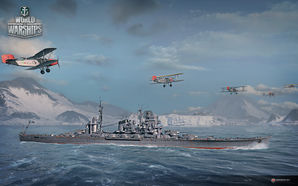 A very powerful cruiser in all respects. Compared with the preceding classes of heavy cruisers, Zaō had a greater number of main battery and AA guns, thick armor and a reinforced torpedo armament.

The ninja among Tier X cruisers, Zao specializes in striking with a single massive salvo, then slipping away before the enemy can retaliate.

Japanese cruiser captains will be delighted to know that Zao finally gets an entire new model of gun, replacing the venerable 3rd Year Type that has been the trademark of the line since the Furutaka all the way back in Tier V. And what an upgrade it is! The HE and especially AP shells gain considerable potency, and Zaō delivers them with an accuracy and velocity unprecedented in the line. To further sweeten the deal, Zaō also gains two barrels for a total of twelve, and they are mounted in a friendlier setup of four triple turrets. The one downside is that the turret traverse---already a drawback of the line---suffers a further setback. This makes it especially important that Zaō is doing the ambushing rather than the reverse.

Fortunately this is not difficult to ensure: Zaō can reach a detectability radius of 9.90 km with a (highly recommended) stealth build, which is the best among all Tier X heavy cruisers and nearly as good as the light cruisers. This stealth combines well with her high-alpha, low-rate-of-fire main battery: she can fire a punishing salvo, then go dark before the enemy can effectively return fire.

Her upgraded torpedoes offer another opportunity to use her stealth: with a 12 km range, she can launch these from beyond her detection radius, and even from beyond the range of radar. With two quintuple launchers on each side they can easily devastate unwary victims, and can serve as a good area denial tool. However, their poor firing angles and extremely long reload means they must be used judiciously, with their poor usefulness in brawls being worth a special mention because of their poor firing angles. (The stock torpedoes offer ludicrous speed and a faster reload, but their much shorter range renders them useless in most situations.)

Zaō's survivability is on the lower side of Tier X cruisers, and can sometimes be a mixed bag. She has the smallest health pool of all Tier X cruisers, even counting the light cruisers (with the exception of Smolensk and Colbert), and her armor is mediocre. Her turret angles are horrible. Her anti-aircraft suite and consumable toolkit are unremarkable. However, she does have a few factors working in her favor. She is relatively fast and has a good rudder shift (albeit with a lackluster turning circle), giving her decent ability to reposition and dodge incoming fire. Her citadel is quite hard to hit, is protected by a small but steeply angled turtleback, and her hull is rather narrow allowing her to seem to cheat death by the virtue of avoiding taking citadel hits and yielding over penetrations against large caliber AP when broadside. Still, taking Zaō into a stand-up fight is not advisable, as her low HP pool can prove to be her undoing in fights against enemy BBs with large caliber (431mm+) guns due to overmatch, as well as against some cruisers.

The only research to be done is the torpedoes, which are highly recommended, as unlike the stock torpedoes they can be launched from beyond detection range.

Zaō is most effective with a stealth build. With already-good accuracy, non-accuracy buffs may benefit the ship more.

The recommended upgrades for Zaō are as follows:

Sitting at the top of the tech tree, the suggested skill selections for Zao continue to focus on her stealth aspects. Key skills include Gun Feeder at Level 1, Priority Target at Level 2, Superintendent at Level 3, and Concealment Expert at Level 4. Captains who chose to take Main Battery Modification 3

in Upgrade Slot 3 may wish to take Grease the Gears as their Level 1 skill to improve her turret traverse.

Zaō can equip the following:

Zao (蔵王, named after Mount Zao), is based off of the 1941 Type A Heavy Cruiser, which was an attempt by Japanese ship makers to construct a Heavy Cruiser fit for leading cruiser divisions in the Decisive Battle Strategy under the Sixth Naval Armaments Supplement Program. In the strategy, these cruisers would have formed the backbone of torpedo flotillas during expeditions, and the triple mount 20.3cm guns would have been the heaviest armament on a Heavy Cruiser for that time. It was never built though. In total, 8 ships were planned to be built in an Ibuki-style lay out. However, due to lack of funding or interest from the Imperial Government coupled with the threat of war with America, the project was scrapped along with the supplement program in 1941.

The Circle Six Type A class is the most obscure Japanese cruiser project due to the original documents being destroyed at the end of the war. Everything, other than the original requirements put forth by the Navy, were destroyed. Some of the requirements were as follows:

Ships of Japan
Cruisers
Retrieved from "http://wiki.wargaming.net/en/index.php?title=Ship:Zao&oldid=321178"
Categories:
Your location:
To log in, select the region where your account is registered
CIS Europe North America Asia
Or use Microsoft Login to enter WoT XBOX ecosystem
Log in