An alternative to moving the front of your tank slightly around a corner, firing, and then backing up again ("Peek-a-boom") is to maneuver your tank into what's commonly referred to as the Sidescrape Position. In this position you expose the side of your tank rather than the front, at an angle that presents a very high chance of a ricochet. You also do not move in and out of cover. On German and Russian tanks especially, this avoids exposing the front of the tank and potentially taking module and crew hits. Under many circumstances, this position offers more protection. Just be aware of the enemy(ies) you're facing and the potential downsides.

The reverse angling technique is a variant in which the tank is sidescraping with its rear oriented towards the opponent. It is normally used on tanks with forward-mounted turrets in order to create better angling for sidescrapes. A good set of examples of such tanks suited for reverse angling is the T29, T32, T34 and TOG II* heavy tanks.

Notice the drawn images below: 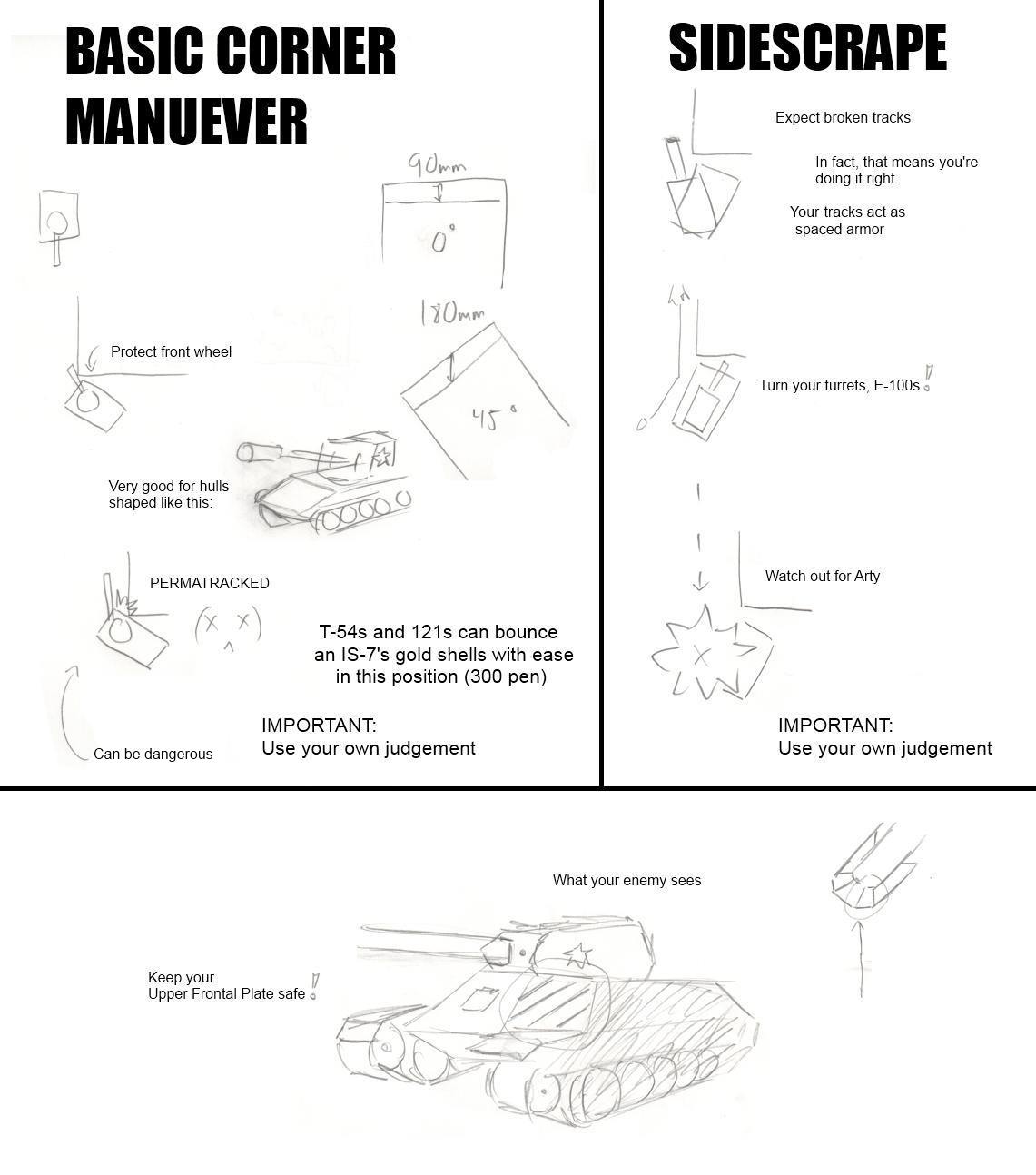 In the side scrape box of image #1, boxed turreted tanks should keep the sides of their turret parallel to the hull to protect the flat portions of armor on the turret (Which would be a major weak spot). As mentioned, tracks are spaced armor. Don't mind if the enemy is perma-tracking you. This means you are able to absorb HEAT shells and let them waste rounds on you (Especially when you have sideskirts and assuming their arty isn't targeting you).

Also notice the sketch of a Pike-nosed Russian tank. The Pike-nose is specifically designed to bounce incoming fire directly in front of the tank. Angling the pike nose in any angle (Both up-down and side to side) will result in one of the armor plates to become flat(er) towards enemy fire, which decreases the effective armor value.

In image #2, tanks like the Maus can be used to sidescrape off. When in a platoon or just teamwork, one teammate can sidescrape, baiting the enemy to shoot and reload, allowing other teammates to poke out and return fire whilst you also return fire. This (in most cases) is an effective tactics in urban areas, when enemies are backed up in an alley or street while you and your teammates are at a corner.

German tanks (With their infamous flat lower plate) can use their lower plate to bait an auto bounce. Keep in mind that AP and APCR shells bounce at 75 degrees, HEAT bounces at 85 degrees, and HE and HESH shells cannot bounce at all (Although the effective armor can block the effects of splash damage).

The Pike-nose can be used to bait-shot by only exposing the armor plate facing away from the corner. This results in a armor plate that can auto bounce a shell while hiding the other armor plate that would otherwise would become a weak spot. Keep in mind that you are also exposing part of your Lower plate, which can be a problem.

Keep in mind of trollers, over-angling, improper hiding of lower plate, simple peeking, and large calibre guns who can overmatch your armor, or deal a very reasonable amount of damage using HE.

Retrieved from "http://wiki.wargaming.net/en/index.php?title=Tactics:_Sidescraping_and_Reverse_Angling&oldid=298966"
Category:
Hidden category:
Your location:
To log in, select the region where your account is registered
CIS Europe North America Asia
Or use Microsoft Login to enter WoT XBOX ecosystem
Log in