USA | Medium Tank | Tier VI
Battle Tier
1234567891011
Overview
Mouse over "
▲
Well, the ones further down, of course.
" for more information
[Client Values; Actual values in
▲
Specifically, the mismatch in crew values caused by commander's 10% crew skill bonus. Outside of a crew of 1 commander only, 100% crew is a fiction. The client values, given for 100% crew, will normally be taken into battle with 110% crew skill members aside from specific functions, causing their actual performance to deviate from the expected client value. These differences are taken into account in tooltip boxes.
]
Crew
Mobility
Armor
Armament
General
Values are Stock - click for TopValues are Top - click for Stock
M4A3E2 Sherman Jumbo

The M4A3E2 Sherman Jumbo is an American tier 6 medium tank.

The heavy-armored assault variant of the M4A3(75)W. The vehicle featured additional 38-mm armor plates, enhanced transmission compartment hatch, and a new turret with enhanced armor that was developed on the basis of the T23 turret.

Sloped and thicker armor gives this tank a chance to bounce more shells compared to other Shermans, but the Jumbo is slower and less maneuverable. It has armor rivaling the heaviest tanks around its tier, and even tanks above it like the T29 and Tiger tanks. in addition, it is also smaller than comparable heavy tanks, making it harder for artillery to hit you. It possesses a medium's firepower and health pool, combined with a heavy's armor and speed. As a result, you will be forced to try and play smart - keep flashing your frontal armor and gun mantlet, and fire your gun at weak spots in the enemy armor. Due to its thick armor and lack of maneuverability, the Jumbo tends to be more successful as a brawler than as a typical flanking medium tank. Overall, the Jumbo is both very comfortable for beginners and very rewarding for veterans.

The M4A3E2 Sherman Jumbo marks the end of its American medium line.

- More versatile than a heavy tank

The main advantage of the Jumbo is its strong front armor, especially its turret. This is especially true in city-fighting when it is angled around corners, hiding its weaker side armor. Being virtually impenetrable(except for weakspots) from tier 5 guns, the M4A3E2 is a very dangerous opponent for many. For this reason the M4A3E2 can spearhead charges and come out with little injury whenever it is on top of the list.

Against higher tier opponents, it will find its armor more of a liability. More so, its gun proves to be very weak unless hitting weakspots . When facing a tougher target, flanking should often be the only option, but its slow speed is not conducive to flanking anything unless you catch them by surprise. As a result, you should shift into a supporting role when facing higher tiers. If alone and facing tanks with poor depression, it is a good idea to facehug them. With the stock turret's 152mm thick armor and extremely thick mantlet, it is almost impossible to penetrate. Be careful if you use the 105mm however, as the HE damage can damage your gun or even lower your HP. In such cases it is advisable to wait until the enemy has fired, then back away, fire and hug again.

Another potential tactic is side-scraping. Although the lower section of the side is only 38mm, the upper section is 76, and still can bounce any gun in game if angled correctly.If caught in the open, don't be afraid to show a bit of your side at an extreme angle. This tactic will increase both your frontal armor and side armor, causing tanks such as the Cromwell, T-34/85, and VK series to have trouble penning you. Players who have experience with German tanks like the E-75 and E-50 will be very comfortable with this tactic.

With generally better armor and roughly the same speed and manoeuvrability as the M6, this tank plays better as a heavy than as a medium. The only advantage the M6 has is its 90 mm gun. So, focus on targets you can penetrate and use your superior rate of fire to whittle them down.

One of more interesting aspects of the Jumbo are that it is one of the very few tanks in the game with a real choice between which turret to use. The 2nd turret is needed to use the improved M1A2 gun, offers more HP, and has superior view range and traverse. The 1st turret has very strong armour all around, but will leave you with the exact same guns the tier 5 M4 had (though with better RoF). It is up to player preference whether to play the tank as a pseudo-heavy using the 1st turret and 105mm howitzer, or as a heavy medium using the 2nd turret and M1A2 gun.

The Jumbo also has a 139mm thick lower glacis plate that is somewhat similar to the one found on the M36 Jackson but far thicker. This unusual feature makes the Jumbo a tough nut to crack, even when it's cresting a hill. When you get tracked while cresting, you can still bounce some shots but artillery will soon fire on you. Therefore, use this feature defensively and play smart.

In June–July 1944, the Army accepted a limited run of 254 of M4A3E2 Jumbo Shermans, an up-armored version of the venerable M4 Sherman series with thicker armor and the 75 mm gun in a heavier T23-style turret. The Jumbo had even thicker frontal armor than the Tiger I and was intended for assaulting hardened enemy fortifications in the allied push to break out of the Normandy beachhead. It entered combat in August 1944,

The "Jumbo," nicknamed came from her crews, due to the extra size from the added armor (including 4 inches on front), but at a slower about 3-4 mph. Built with 75 mm gun, it was frequently re-armed with 76-mm guns by the using units. Users: US, France (one vehicle) 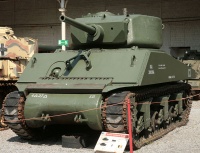 During the war, U.S. crews found that on soft ground such as mud or snow, the narrow tracks gave poor ground pressure compared to wide-tracked second-generation German tanks such as the Panther. Soviet experiences were similar and tracks were modified to give better grip in the snow. The U.S. Army issued extended end connectors or "duckbills" to add width to the standard tracks as a stopgap solution. Duckbills were original factory equipment for the heavy M4A3E2 Jumbo to compensate for the extra weight of armor.

Additional information can be found in an article at the Military Factory web site, which does not permit reproduction.
click to read more...

USA
Medium Tanks
ja:Tank:A36 Sherman Jumbo
Retrieved from "http://wiki.wargaming.net/en/index.php?title=Tank:A36_Sherman_Jumbo&oldid=285189"
Categories:
Your location:
To log in, select the region where your account is registered
CIS Europe North America Asia
Or use Microsoft Login to enter WoT XBOX ecosystem
Log in