China | Light Tank | Tier IV
Battle Tier
1234567891011
Overview
Mouse over "
▲
Well, the ones further down, of course.
" for more information
[Client Values; Actual values in
▲
Specifically, the mismatch in crew values caused by commander's 10% crew skill bonus. Outside of a crew of 1 commander only, 100% crew is a fiction. The client values, given for 100% crew, will normally be taken into battle with 110% crew skill members aside from specific functions, causing their actual performance to deviate from the expected client value. These differences are taken into account in tooltip boxes.
]
Crew
Mobility
Armor
Armament
General
Values are Stock - click for TopValues are Top - click for Stock
Type 2597 Chi-Ha
M5A1 Stuart
Type T-34

The M5A1 Stuart is a Chinese tier 4 light tank.

The first tanks of the M5 series were produced in April 1942, and a new modification, the M5A1, was preferred over other variants. After the M24 Chaffee was developed, the M5A1 tanks were deemed obsolete and were exported to other countries, including China. A total of 100 tanks of this type were supplied to the Kuomintang. During the Civil War (1946–1949), many of these vehicles were captured by the PLA.

- Excellent acceleration, and great top speed; engine is better than US M5

- Decent damage output and good penetration (for a tier 4 scout)

- Sharp turns will cost much speed

- Vision range is slightly below average, and less than the American counterpart

- Like other early Chinese tanks in tech tree, it actually was not domestically manufactured, thus doesn't share any equipment with any other tanks expect for Chi-Ha's top gun

This tank plays quite differently depending on if you are near the top or bottom of the battle. If you are near the top, it is advised that you try to spot enemies still, but don't be over aggressive when doing so. Just poke you turret over hills or lead the pack ahead. The gun you have has good characteristics compared to most of the other tier 4 lights, so you can engage other tanks successfully. When you are at the bottom, things change. You can no longer engage most tanks with success, so you have to mainly do spotting, or flanking. You can do this by doing it the same way you would in a low tier battle (works best on hilly, close-quarters areas like the railroad on Live Oaks). You can also find a bush that is roughly 150-350 m away from an enemy area and light them up. If you are going to pick the second option, you should bring a set of decent equipments, like camo net, binocs or coated optics. In the hands of a seasoned player, this tank can take down higher tier medium or heavy tanks with relative ease, or even wreak havoc at enemy positions. In summary, this vehicle gives player a taste on forthcoming high tier Chinese lights: gun that packs a punch, great mobility and a little armor that might matter at times.

Get the engine first, it will help you get around and scout better. In order to mount the 47mm gun, which carries over from the Chi-Ha, you need the tracks to mount it, due to your maximum carry weight. Get the tracks and mount the gun too. Your next purchase should be the either the radio or the turret. This all depends on if you would rather have a slightly more durable tank that sees further or a tank that can go out further and still relay the information back to your teammates. 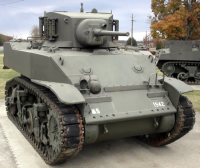 The Light Tank M5 was a modified Light Tank M3 with a new power train and an improved armor layout. A radial engine shortage was expected in 1941, and it was decided to find alternative engines to power tanks. The engines in the M5 were Cadillac automobile engines, each with its own transmission. The hull was all-welded, and the glacis was sloped and moved out to make more room for the drivers. The drivers had their own hatches, which were equipped with periscopes. Direct vision for the drivers was through two peepholes that were closed with steel plugs attached with chains. The M5's turret was the same as that on the light tank M3A1. The M5 was originally known as light tank M4, but was redesignated to M5 to avoid confusion with the medium tank M4. The British called the M5 the Stuart VI.

The major distinguishing features between the Light Tanks M5 and M3A3 are the hull sides and rear deck. The M5 had a raised rear deck to accommodate the twin Cadillac engines and vertical hull sides, while the M3A3 had sloping upper hull sides and a flat engine deck. During the 1930's the United States Army did not consider tanks to be a relevant weapon on the battlefield. Consequently, little research and development was performed. German victories in Europe exploiting firepower and mobility of tank warfare rekindled interest in tanks among U.S. military leaders, resulting in development plans for a light tank. Several models of the light tank were developed, including the M1, M2 and M3 series. In 1942 production began on the M5 series light tank at the Cadillac Division of General Motors Corporation. There was no M4 light tank designation in order to avoid confusion with the M4 medium tank, then under production. In September of 1942 design improvements were made, culminating in the M5A1, the ultimate refinement of the 1930's vintage U.S. light tank technology. A total production of 6810 M5A1 tanks occurred from 1942 to 1944.

Evaluation of the M5A1 design concept entails the basic principles of tank warfare; armor, firepower and mobility. The inherent nature of the light tank implies light armor which is an obvious deficiency for a combat vehicle. The frontal armor was rolled homogeneous steel approximately 1.125 inches (29 mm), sufficient for the Far East theater, but insufficient for German munitions especially toward the end of the war. The vehicle had a relatively high profile (height 101 inches), easing the job of enemy gunners to acquire a target. Light tank also implies light firepower which, in the form of a 37mm main gun, was inferior to other combat vehicles at the time in the European theater. However, the armament was quite effective against Japanese combat vehicles in the Far East theater. Mobility was impressive with a maximum speed of 36 MPH. Interviews with actual drivers indicated that speeds in excess of 45 MPH were readily achieved. The V8 engines were very quiet and the Hydramatic transmissions allowed easy gear shifting, resulting in a stealthy vehicle.

The M5A1 was equipped with a .30 caliber bow machine gun, .30 caliber coaxial machine gun, 37 mm main gun and .50 caliber anti-aircraft machine gun. The M5A1 was originally equipped with a .30 caliber anti-aircraft machine gun on the turret but most tankers acquired the .50caliber machine gun since it was more effective. Ground pressure is 12.3 psi. The suspension uses vertical volute springs. The controlled differential is on the right side of the driver. This is essentially a 2 speed automatic shift gear box coupled to 2 drive shafts from 2 automatic 4 speed transmissions. This gives the vehicle 8 speeds forward and 2 speeds in reverse, all automatic shift. The power plant is the 346 cu.in. flat head V8 engine, two of which are mounted in the rear of the vehicle, connected to 4 speed Hydramatic transmissions. Each engine generated 110 horsepower. A two barrel Carter carburetor provides fuel to the engine with thermal spring automatic chokes for cold starts. The tank commander/main gun loader sits on the right, while the gunner sits on the left. A gyroscope to the right of the turret is used to aid in aiming the main gun on irregular terrain. The M5A1 had a crew of 4: the driver, assistant driver/bow gunner, main gunner and tank commander/loader. The M6 periscope was used in 5 locations on the vehicle with 4 looking forward and one to the rear.

The M5 made its debut in the invasion of Casablanca in French North Africa. By 1943, and at the time of the invasion of Sicily, the M5A1 was becoming the standard light tank of the American armored divisions. Because of limited firepower, the M5A1 eventually took on reconnaissance and escort duties in Italy and, after the invasion of Normandy, throughout Europe. In the Pacific theater, the M5A1 made its debut at Roi-Namur in February of 1944 and on Saipan, the same year. The M5A1 was quite effective against most Japanese armor, even the Japanese Type 97 Chi-Ha medium tank typically used in the Pacific theater. The 37 mm main gun, although obsolete in Europe, was found to be effective against Japanese targets. Consequently, many other vehicles carrying the 37 mm gun, such as the M8 armored car and M3 anti-tank gun were retained and used in the Pacific theater.
click to read more...

The Japanese 47 mm Gun Type 1 gun was the main armament of the Type 97 Shinhoto Chi-Ha, Type 1 Chi-He, Type 3 Ka-Chi, and Type 5 Ke-Ho tanks. Its configuration on the American M5A1 is fake.
click to read more...

China
Light Tanks
ja:Tank:Ch09 M5
Retrieved from "http://wiki.wargaming.net/en/index.php?title=Tank:Ch09_M5&oldid=284937"
Categories:
Hidden category:
Your location:
To log in, select the region where your account is registered
CIS Europe North America Asia
Or use Microsoft Login to enter WoT XBOX ecosystem
Log in