Czechoslovakia | Medium Tank | Tier VIII
Battle Tier
1234567891011
Overview
Mouse over "
▲
Well, the ones further down, of course.
" for more information
[Client Values; Actual values in
▲
Specifically, the mismatch in crew values caused by commander's 10% crew skill bonus. Outside of a crew of 1 commander only, 100% crew is a fiction. The client values, given for 100% crew, will normally be taken into battle with 110% crew skill members aside from specific functions, causing their actual performance to deviate from the expected client value. These differences are taken into account in tooltip boxes.
]
Crew
Mobility
Armor
Armament
General
Values are Stock - click for TopValues are Top - click for Stock
Konštrukta T-34/100
TVP VTU Koncept
Škoda T 50

The TVP VTU Koncept is a Czechoslovakian tier 8 medium tank.

A medium tank project, proposed by the Škoda company as part of the general purpose vehicle concept developed in Czechoslovakia. No prototypes were manufactured.

The TVP VTU Koncept leads to the Škoda T 50.

The TVP VTU is essentially an improved Škoda T 40 without premium economy bonuses, two tiers higher. It is a fast tank with a large profile. You get to chose either a 8.8 cm gun with high DPM or a 10.5 cm with a higher alpha. The 8.8 cm gun is superior in every respect except for alpha damage. The guns fire low velocity shells and make it hard to fire at long range. In order to hit the target with more consistency, you should avoid firing before the reticle is fully aimed.

The TVP VTU has everything it needs to be a good tank except one crucial thing : the ability to survive a hit. The tank has a very thin armor, which wouldn't be such an issue if the modules weren't so fragile. While driving this tank, you can expect a module to break or a crew injury on every hit. Since the tank is very tall and boxy, it is also very hard to hide in cover. While driving this tank, you should stay as far as you can from the front line, but close enough so that your gun firing arc doesn't become too much of an issue. The gun depression on the top turret (-6) is also rather bad for its paper armor.

The Czech tier VIII grind is very painful, but the IX and X are definitely worth it.

The stock turret has better gun depression than the upgrade.

Vertical Stabilizer and Gun Rammer are a must. Coated optics for aggressive playstyle, Binocular Telescope for passive playstyle. Crew skills should focus on enhanced mobility, as well as view range and accuracy for long range fighting. Save-stowage on the loader is mandatory. This tank, like many Czech tanks, tends to take ammo rack damage every time it is hit.

The development of post-war Czechoslovak tanks started very soon – by the end of 1945, where VTÚ (Vojenský Technický Ústav – Military Technical Institute) filed a report to MNO (Ministry of National Defense) and to the local Red Army committee on the state of current tanks and other armored vehicles development. This led to series of proposals I will deal with later, culminating with the TVP project (Tank Všeobecného Použití – Tank for General Use). TVP was heavily influenced by both Soviet (cast turret) and German development (gun mount, welded turret version, mantlet) and drew from the best of both worlds.

Based on the above mentioned report, on 17.10.1945, the 1st Department of Army HQ submitted its ideas about the new medium tank to VTU. The requirements included:

Interesting fact is that the vehicle design itself was to be selected only after selecting the gun itself (the tank was supposed to be “built around the gun”), based on comparison trials of all the guns available. In December 1945 to February 1946 (Dubánek here mixes the dates, an obvious typo – I fixed it), the VTU representatives considered the 88mm German AA gun (the AA role is specifically mentioned, but it’s possible the author has the KwK 43 L/71 in mind – in post-war Czechoslovakia, the PaK 43 and 41/43 were adopted due to the lack of native or Soviet AT guns as PTK vz.43 (protitankový kanon – AT gun, vz.43 – 1943 pattern) with shell velocity of 1000 m/s or a 105mm gun (900 m/s) to be viable, as during tests, both were able to penetrate 100mm of armor at 3000 meters (60 deg – means 30 deg using German angle methodology, at that point Czechoslovak army was using the German trial methods, unlike the pre-war ones, that were very obscure).

Second department of III.section of VTU introduced on 1.3.1946 their preliminary project of a medium tank with a model of 1:50 scale, called the TVP (Tank Všeobecného Použití): 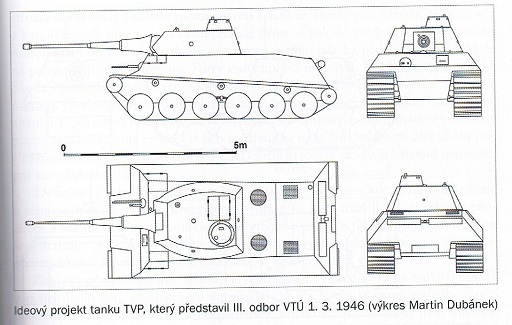 It was a classic Czechoslovak tank school concept. The hull shape resembled the one of LT-38 and it still had leaf springs. The mantlet shape was influenced by German tanks, the driver and radioman hatches were actually inspired by British designs. The Soviet inspiration was in the electrical propulsion of the turret rotator. This first version also had a hull flamethrower, linked to the bow machinegun (Vz.37 or BESA). It was considered to implement an automatic loading mechanism by Škoda (37mm, 47mm and 57mm versions existed), but at that point it was decided semi-automatic breech would be sufficient. The coaxial machinegun was to be linked to the gun within the gun mount in order to save space in the turret. Commander’s copula was recommended to be made fully traversable with 5 episcopes attached to the traversing ceiling, along with commander’s binoculars or artillery binocular sights and was to be equipped with holes for emeregency signal flags. The turret was also proposed to be equipped with a roof-mounted grenade launcher/mortar for close defense (5-20 meters).

The bow machinegun (and the flamer) were capable of -10 to +25 elevation thanks to the mount, similiar to the LT-38 tank. The flamethrower was to be fuelled by a 100 liter napalm tank (not technically napalm, Czechoslovaks developed their own flamethrower fuel of excellent properties, might get into that if necessery) – this tank would prolong the hull only by cca 25 cm. The vehicle was to be equipped with a smoking device and by additional side armor (“Schurzen style” – another German lesson) consisting of steel mesh, fixed at 20 cm from the main hull. This mesh armor was trialed as early as 1945.

The mobility was to be ensured by an unspecified diesel air-cooled engine, providing the vehicle with power-to-weight ratio of 20 horsepower/ton (interestingly, the ratio was specified, not engine type or horsepower, given the fact the tank was proposed to weight 33 tons, the engine would have to have 660 horsepower). Ground pressure was not to exceed 0,5 kg/cm3. The design counted on leaf springs for suspension, which was clearly a weakness the designers realized. The commander of VTU, Col. Ing. Josef Trejbal proposed at least two prototypes to be built by each of the design competitiors (realistically, only Škoda and Praga were available). Each of the prototypes was to be built without the gun first.

Škoda reacted on these VTU demands first with its proposal from 8.12.1946 (archive drawing designation Am 39-P), which was considered to be the “factory” version of the theoretical VTU TVP design. Between 1947 and 1948, the conditions of the project were being “chiseled”, including the final version of army demands (that were always in the flux). There is very little known about the TVP project from this era. Czech historian Oto Holub (Československé tanky a tankisté, 1980) claims that in 1948, Škoda was working on a “medium TVP tank” weighing 16 tons with a 75mm gun, powered by a Škoda 147,2kW (197hp) engine with Praga Wilson transmission and 3-man crew, but it is widely believed (Dubánek et. al.) that Holub simply mixed up the Škoda T-17 light tank project with TVP. Holub also mentions a “heavy” version of TVP tank (which most likely would be the TVP we are talking about) of following parameters: 30 tons, 75mm frontal armor (40mm sides), armed with a (German) 105mm gun (900 m/s), powered by an unspecified Škoda 454 kW engine (609 hp), Praga Wilson transmission and 50km/h maximum speed. 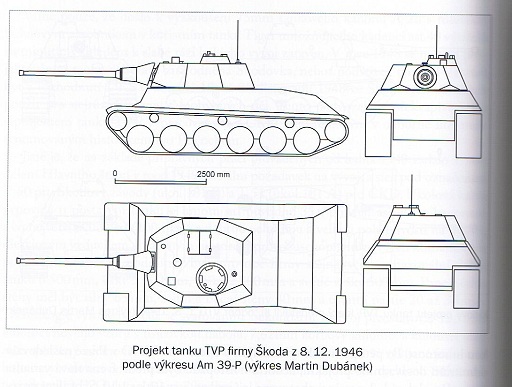 The gun had following characteristics, according to US Catalog of Enemy Ordnance:

"Further research into this type of shell is possible."

Another gun mentioned by M.Dubánek was the 75mm A26 autoloaded gun with a drum loading mechanism, trialed in Czechoslovakia on a Tiger I testbed tank in 1947. There is some sort of mix-up regarding what this gun actually is. It is clear that there were both the A18 and A26 Škoda projects in existence, but I.Pejčoch (obrněná technika) mentions the A18 75mm gun (for Škoda T-25) trialed on the Tiger in 1947 – with a drum autoloader too. For the T-17 light tank project, Dubánek mentions the 75mm A18. Dubánek himself admits (page 170) that the times were turbulent and many documents simply “got it wrong”. Given the fact that in 1945 according to all sources the 75mm caliber gun was considered insufficient (and thus was not developed further after 1945), I am inclined to believe that in this case, the A26 and A18 on Tiger are one and the same gun. In such a case, the gun would have following parameters:

The penetration at 1000 meters is the only real data we have on its penetration. 90mm at 60 degrees (almost certain to be 60 degrees, as Czechoslovak army used German methodology during the war) means cca 104mm at 90 degrees. Based on PaK 40 L/48 and PaK 42 L/70 examples, the loss of penetration between 100m and 1000m is roughly 20 percent, which would give us solid penetration of 130mm at 100m. The capacity of the autoloading mechanism is however not known to any of the Czech sources. Given the fact that proposed tier 6 T-25 would use this gun too, it gives us a nice continuation possibility.

By 1948, (now nationalized) Škoda was ordered to actually deal with the project, since the chassis was proposed to be used for several SPG and TD project (this was ordered by the DKS (artillery committee – a panel of ministry of defense and Škoda artillery experts) on a meeting, held from 18.11.1948 to 20.11.1948.

Czech
Medium Tanks
ja:Tank:Cz07 TVP 46
Retrieved from "http://wiki.wargaming.net/en/index.php?title=Tank:Cz07_TVP_46&oldid=305002"
Categories:
Your location:
To log in, select the region where your account is registered
CIS Europe North America Asia
Or use Microsoft Login to enter WoT XBOX ecosystem
Log in