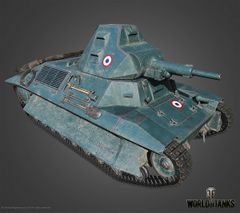 France | Light Tank | Tier II
Battle Tier
1234567891011
Overview
Mouse over "
▲
Well, the ones further down, of course.
" for more information
[Client Values; Actual values in
▲
Specifically, the mismatch in crew values caused by commander's 10% crew skill bonus. Outside of a crew of 1 commander only, 100% crew is a fiction. The client values, given for 100% crew, will normally be taken into battle with 110% crew skill members aside from specific functions, causing their actual performance to deviate from the expected client value. These differences are taken into account in tooltip boxes.
]
Crew
Mobility
Armor
Armament
General
Values are Stock - click for TopValues are Top - click for Stock
Renault FT
FCM 36
AMX 38Somua S35

Developed in the mid-1930s as an infantry-support tank. It was the only French vehicle to utilize a diesel engine. By 1939, a total of 100 vehicles were manufactured.

The FCM 36 is much like the Hotchkiss H35 and D1. Compared to other tier 2 tanks it lacks speed and mobility while having good armor. Its thick and well sloped armor is immune to most autocannons. Don't be afraid to lead a charge, although that rarely happens seeing as its so slow. Please note that you will often be left behind at the start of the battle due to the speed.

The FCM 36 is more like a miniature heavy tank than it is a light. It is sluggish even when fully upgraded seeing as the Berliet Ricardo engine only adds 14hp. It receives the same gun selection as the H35, and should also mount the 25mm Canon Raccourci mle. 1934 because the 37mm SA38 lacks penetration. The best way too play the FCM 36 is to support the weak spots in your teams line, as most tanks that you will find in those places can't penetrate you. Try and make sure that you won't have too relocate too much BEFORE the game starts. The FCM 36 is not very mobile and has a hard enough time making it to the frontlines.

The FCM 36 or Char léger Modèle 1936 FCM, was a light infantry tank that was designed for the French Army prior to World War II. It had a crew of two and was equipped with a short 37 mm main armament and a 7.5 mm coaxial machine gun. Power was provided by a diesel engine.