France | SPG | Tier IX
Battle Tier
1234567891011
Overview
Mouse over "
▲
Well, the ones further down, of course.
" for more information
[Client Values; Actual values in
▲
Specifically, the mismatch in crew values caused by commander's 10% crew skill bonus. Outside of a crew of 1 commander only, 100% crew is a fiction. The client values, given for 100% crew, will normally be taken into battle with 110% crew skill members aside from specific functions, causing their actual performance to deviate from the expected client value. These differences are taken into account in tooltip boxes.
]
Crew
Mobility
Armor
Armament
General
Values are Stock - click for TopValues are Top - click for Stock
Lorraine 155 mle. 51
Bat.-Châtillon 155 55
Bat.-Châtillon 155 58

In the mid-50s, Batignolles-Châtillon developed an original design of the heavy SPG that featured some elements of the U.S. M47 chassis. The vehicle was equipped with a 155 mm howitzer installed into the rotating turret. At least one prototype was built. Never saw mass production.

The Bat Chatillon 155 55 is a very different artillery piece than any of the other tier 9's. It features a 155mm gun that has the lowest-in-tier 750 alpha damage, but the best accuracy and reload of any artillery piece in its tier. Similar to the Lorraine 155 51, it deals its damage over time by putting large numbers of rounds downrange. However, due to its low alpha damage, its damage can vary greatly, as many of the super-heavy tanks in the game can shrug off its hits for little to no damage. The gun, other than the damage, is a straight up upgrade to the tier 8 Lorraine 155 51, with better reload and accuracy. It also gains a full 360 degree turret, which allows you to switch targets more easily. The Bat Chatillon 155 55 is interesting in TD mode due to its high mobility and full turret, allowing it to surprise enemies from unexpected locations. However, it is hindered due to its low alpha, meaning that the target will often survive your one shot, and nonexistent gun depression, which can make it hard to hit things. 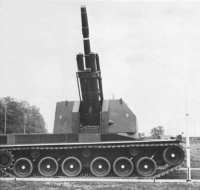 Batignolles Chatillon 155mm
Following Lorraine’s project of the self propelled howitzer, Batignolles Chatillon started the work on the self propelled artillery vehicle with a fully rotatable turret. Main feature was to be drum based automatic loader system installed in the turret. In late 1958 all development was canceled and project was abandoned with only a one prototype built.
click to read more...

France
Self-Propelled Guns
ja:Tank:F67 Bat Chatillon155 55
Retrieved from "http://wiki.wargaming.net/en/index.php?title=Tank:F67_Bat_Chatillon155_55&oldid=276713"
Categories:
Your location:
To log in, select the region where your account is registered
CIS Europe North America Asia
Or use Microsoft Login to enter WoT XBOX ecosystem
Log in