France | Medium Tank | Tier IV
Battle Tier
1234567891011
Overview
Mouse over "
▲
Well, the ones further down, of course.
" for more information
[Client Values; Actual values in
▲
Specifically, the mismatch in crew values caused by commander's 10% crew skill bonus. Outside of a crew of 1 commander only, 100% crew is a fiction. The client values, given for 100% crew, will normally be taken into battle with 110% crew skill members aside from specific functions, causing their actual performance to deviate from the expected client value. These differences are taken into account in tooltip boxes.
]
Crew
Mobility
Armor
Armament
General
Values are Stock - click for TopValues are Top - click for Stock
SARL 42

Developed by Hubert Clermont from 1940 through 1942, during the German occupation of France. Some elements of the SOMUA S35 medium tank and of the experimental G1R infantry tank were incorporated in the new vehicle. It was hoped that development would be continued after the liberation of the country. However, by 1944 the project was deemed outdated.

The SARL 42 marks the end of its French medium line.

While the tank itself is underwhelming with questionable armor and mobility, it does come with two choices of decent weaponry. The top 75mm has solid damage but mediocre accuracy and rate of fire. It does have decent penetration up to tier 5 but will struggle against more solid enemies. The top 47mm is unique to the SARL 42, comparable to the top 2 pounder on the Matilda at tier 4. It has less penetration and fires slower than the 2 pounder, but has better accuracy than the 75mm on the SARL 42. All in all, it's a text book medium tank: not a lot of armor with some adequate weapons.

Apart from the company FCM that continued to work on the Somua S35 modernization outside of the occupation zone, an analogical development was taking place inside the occupied area. One of the companies working in secret on promising projects was Ateliers de construction de Rueil (ARL) from Rueil-Malmaison, west from Paris. The former tank division of the giant artillery producer APX played major role in pre-war French tank development. ARL developed and produced tank turrets and ARL V39 self-propelled guns were supposed to be produced in the company facilities. Other tanks were developed by ARL as well - from medium to super heavy ones, including the 145-ton ARL Char C.

One of the promising projects ARL was working on was the ARL 3 tank turret, developed under the leadership of two experienced engineers, Lavirotte and Devenne for the Char G1 medium tank. It was a three man turret with roughly 60mm of armor and it was supposed to be armed with a 75mm L/32 gun. In June 1940, the development was stopped for obvious reasons, but not completely.

In 1942, the ARL engineers under Lavirotte started working on a radical modernization of the Somua S40 cavalry tank. It's worth noting that this project was not connected in any way to the FCM S40 modernization development. The main idea of Lavirotte's group was to improve the S40 characteristics as much as possible without having to completely rework the suspension and the powerplant of the vehicle. This basically meant that improving the armor was not really an option. Lavirotte was thus directly involved in the development of this project, that received the internal designation of SARL 42 (Somua-ARL).

The hull was changed in shape - the front received more reasonable angles, the radioman place was removed and the hull itself became more streamlined and simpler. Another thing that was improved was the turret ring. Its internal diameter was increased to 1500mm. 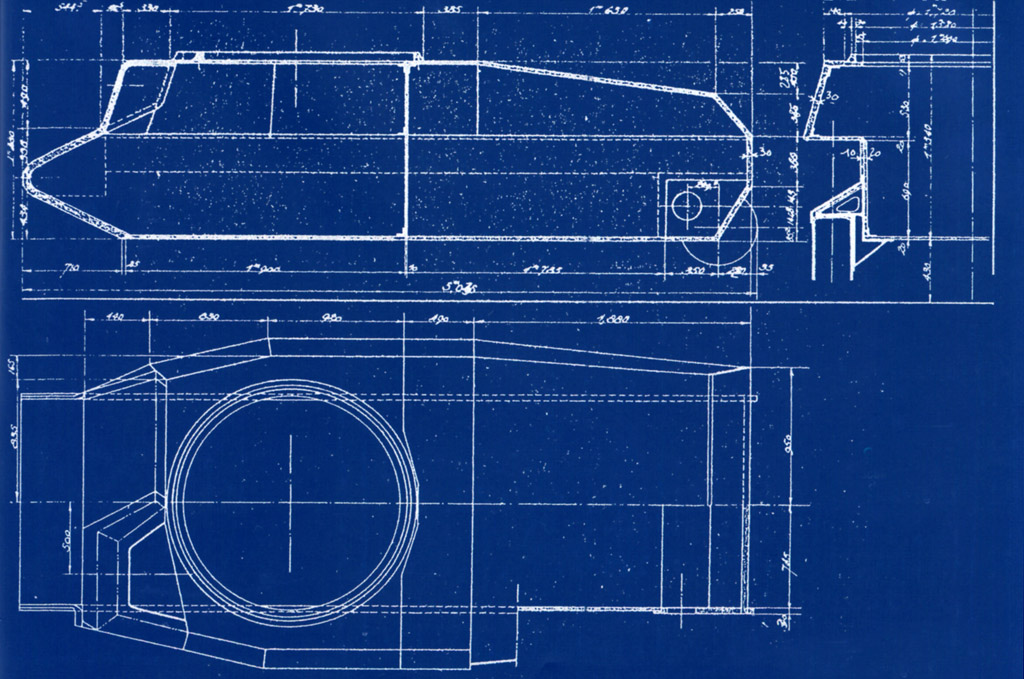 Devenne's group, located outside of the German-occupied zone in Caussade, was responsible for the turret development. Since the ARL 3 turret drawings didn't survive the war, it's not hundred percent sure that this was the exact turret that the SARL 42 was to be equipped with. Nevertheless, it was designed by the same people.

The way this turret looked was quite unusual. First, it did not overlap the turret ring completely, especially on the sides and rear. Secondly, the turret was actually designed in order to have as narrow frontal silhouette as possible. According to the drawings, the turret was to be made using as much welding as possible, another uncharacteristic feature for French tanks. In the front of the turret, there were the loader (who was also the radioman) and the gunner. The commander was placed in the rear-located commander's cupola. Considering the vehicle weight was not to exceed 22 tons, the frontal armor was only 40mm thick and the sides and rear were only 30mm thick. Using the supercharges 230hp engine, the mobility of the vehicle remained at the S35 level. 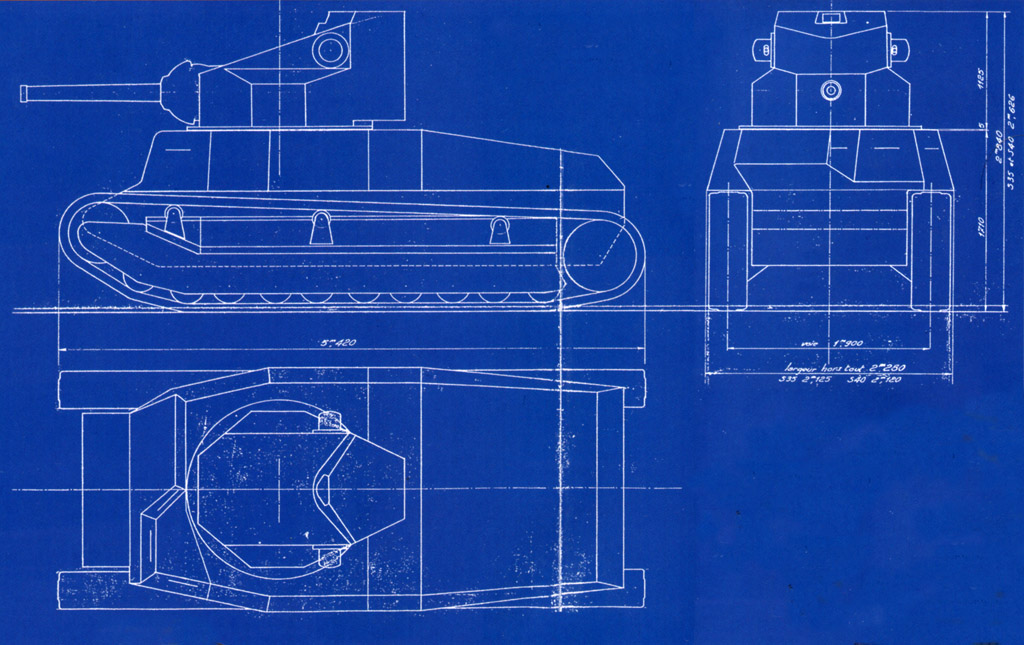 Contemporary reconstruction of how the tank might have looked: 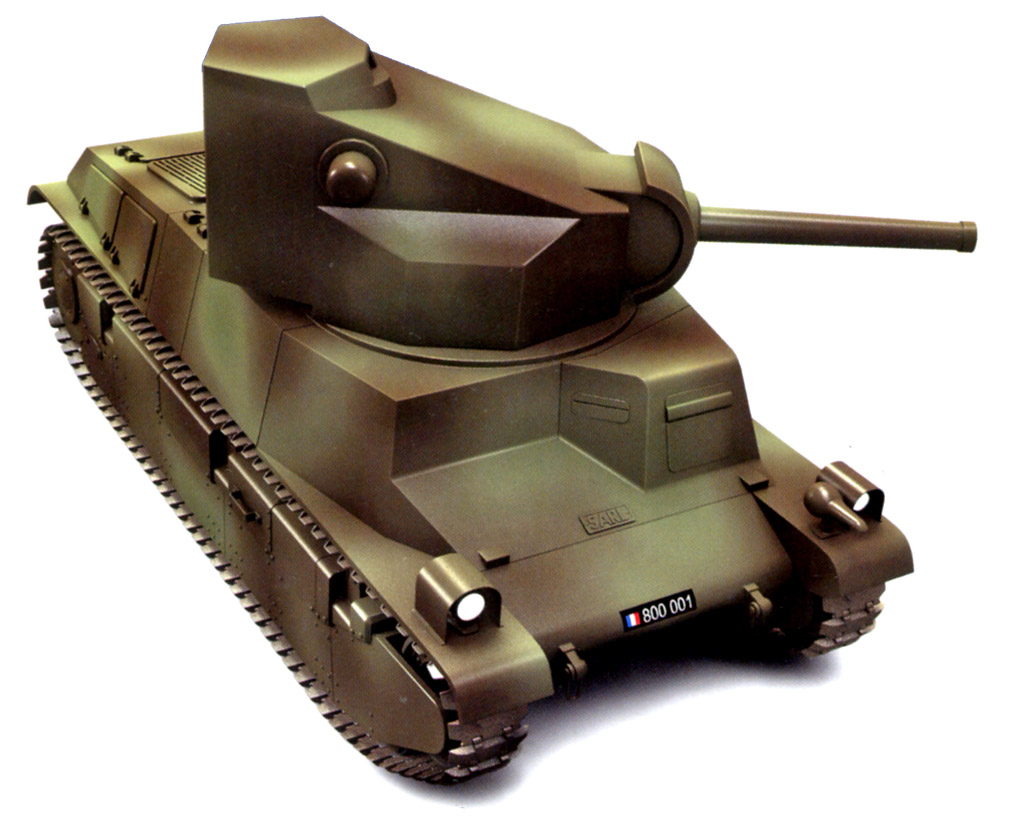 It's worth noting that the group that developed the tank consisted also of artillerymen. The team in Caussade was led by an engineer called Lafargue. Apart from the L/32 gun, they worked on an entirely new cannon. It was clear to them that in the previous 2 years, the armor of tanks in general grew a lot and a new gun was needed to knock them out. And Lafargue designed exactly such a gun - 75mm L/44 with the muzzle velocity of 715 m/s. Performance-wise, the gun was rated somewhere between Soviet F-34 and German KwK 40.

The L/44 (3250mm) was basically the length of the rifled part of the barrel. Lafargue didn't really make the gun from scratch, he based it on the ballistic properties of Schneider 75mm AA guns. The real barrel length was actually 4000mm (L/53).

Autumn 1942, when the Germans occupied the rest of France, meant the end for SARL 42 development. But to say all the development was in vain would be incorrect - the team that developed the SARL 42 became the backbone of the team, that would later develop the ARL 44. Furthermore, the first variant of the ARL 44 was supposed to be equipped with the 75mm SA44 gun, which was for all intents and purposes identical to the gun developed by Lafargue for SARL 42. The SARL 42 itself however was at that point already obsolete and the project was - with many others - sent straight to an archive.
click to read more...

France
Medium Tanks
ja:Tank:F70 SARL42
Retrieved from "http://wiki.wargaming.net/en/index.php?title=Tank:F70_SARL42&oldid=277849"
Categories:
Your location:
To log in, select the region where your account is registered
CIS Europe North America Asia
Or use Microsoft Login to enter WoT XBOX ecosystem
Log in