Germany | SPG | Tier V
Battle Tier
1234567891011
Overview
Mouse over "
▲
Well, the ones further down, of course.
" for more information
[Client Values; Actual values in
▲
Specifically, the mismatch in crew values caused by commander's 10% crew skill bonus. Outside of a crew of 1 commander only, 100% crew is a fiction. The client values, given for 100% crew, will normally be taken into battle with 110% crew skill members aside from specific functions, causing their actual performance to deviate from the expected client value. These differences are taken into account in tooltip boxes.
]
Crew
Mobility
Armor
Armament
General
Values are Stock - click for TopValues are Top - click for Stock
StuG III Ausf. B
Grille
Hummel

The Grille is a German tier 5 self-propelled gun.

German WWII self-propelled gun. Developed on the Czechoslovakian Pz.Kpfw. 38(t) chassis from 1943 through 1944. A total of 282 vehicles were manufactured.

An SPG with high damage potential, intended to hit a target hard. Many tank companies will often seek this SPG to complement their firepower due its impressive damage output.

The Grille has weak armor, is rather sluggish, and the stock gun only has crappy range, but once upgraded to the 15 cm sFH 13 L/17 gun, it gains a lot of firepower with the benefit of having an increased HE damage that can destroy or easily cripple any tank that it fires at.

The Grille leads to the Hummel.

The Grille starts off as a low damage SPG with high RoF (rate of fire). Getting the larger gun, however, changes its play style completely. Compared to other lower tier SPG's, the Grille is where you start to see a massive increase in alpha damage. Direct hits are lethal to light tanks, TD's, mediums, and other SPG's if you can only land them. Heavy tanks will also suffer greatly or die from a direct impact, often losing a large percentage of their health or all of their health as well as a module or two. Of course if you miss you won't do any damage better than 80 HP. The Grille does not reflect on the German SPG philosophy in terms of accuracy, but its still a good deal more accurate than other nations SPG´s.

The Grille's high damage can make it an effective TD or scout destroyer, though it lacks the traverse speed (turning speed) for close-quarters combat. Also, when taking shots from enemy tanks, the first module in the line of fire is the engine, and getting forced to stop due to engine damage is not uncommon, which combined with pathetic gun traversal arc means swift death. 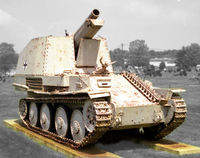 The 15 cm s.F.H. 13 L/17 was only mounted on Lorraine 37L tractors, designated 15 cm sFH13/1 (Sf) auf Geschuetzwagen Lorraine Schlepper (f); this SPG does not exist in World of Tanks. Its configuration on the Grille is fake.
click to read more...

Germany
Self-Propelled Guns
ja:Tank:G23 Grille
Retrieved from "http://wiki.wargaming.net/en/index.php?title=Tank:G23_Grille&oldid=284268"
Categories:
Hidden category:
Your location:
To log in, select the region where your account is registered
CIS Europe North America Asia
Or use Microsoft Login to enter WoT XBOX ecosystem
Log in