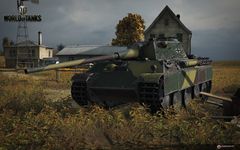 Germany | Medium Tank | Tier VIII
Battle Tier
1234567891011
Overview
Mouse over "
▲
Well, the ones further down, of course.
" for more information
[Client Values; Actual values in
▲
Specifically, the mismatch in crew values caused by commander's 10% crew skill bonus. Outside of a crew of 1 commander only, 100% crew is a fiction. The client values, given for 100% crew, will normally be taken into battle with 110% crew skill members aside from specific functions, causing their actual performance to deviate from the expected client value. These differences are taken into account in tooltip boxes.
]
Crew
Mobility
Armor
Armament
General
Values are Stock - click for TopValues are Top - click for Stock
Panther
Panther II
E 50

The Panther II is a German tier 8 medium tank.

The vehicle was conceived in 1943. Two prototypes with the existing Panther I turrets were ordered in 1944. By 1945 only one of them had been built by the MAN company.

A step-up in the world from the Pz.Kpfw. V Panther, it is best to understand you are still in the same role. While being more powerful and maneuverable than the Pz.Kpfw. V Panther, a M26 Pershing will definitely beat you in a close-quarters fight. Knowing this, it is best to take advantage of your long-range accuracy and stay just behind, or alongside, your team's heavies to avoid close-quarters combat. The Panther II has a higher profile than its counterparts, the M26 Pershing and the T-44, which means you are easier to spot, so position yourself on the battlefield very carefully. The Panther II is like a Pz.Kpfw. VI Tiger but one Tier higher and more mobile.

The Panther II's playstyle revolves largely around its top gun, the 8.8cm kwk L/100. It lacks reliable mobility, armor OR camouflage, putting it in a tricky spot; it hasn't the mobility to flank or flee, the armor to take hits, or the camouflage to snipe*.

Instead, it is mostly like a low camouflage Tank Destroyer - for a Medium Tank the gun is excellent, but is unfortunately let down by its chassis. It sports high alpha, penetration, shell velocity and accuracy. Use it to fight at distance, where the accuracy advantage becomes more relevant.

The Panther II suffers from very unreliable armor, poor mobility and very low camouflage due to its size; thus it is outclassed by vehicles such as the Progetto 46, Indien Pz. and P.44 Pantera.

However, the Panther II can work when done right and leads to the excellent E 50 and decent E 50 ausf M, so although the Panther II is somewhat painful, the grind is mostly worth it.

The first thing to upgrade is the suspension, so that you can then research and mount the L/71 or L/100 once the turret is researched. Which gives extra view range and armor and gives more improvement than the suspension. The engine does not give a very large improvement to this heavy medium, so research this last.

The early impetus for upgrading the Panther came from the concern of Hitler and others that it lacked sufficient armor. Hitler had already insisted on an increase in its armor once, early in its design process in 1942. Discussions involving Hitler in January of 1943 called for further increases in armor, resulting in the tank initially referred to as the Panther 2 (it became the Panther II after April 1943). This upgrade increased the glacis plate to 100 mm (3.9 in), the side armor to 60 mm (2.4 in), and the top armor to 30 mm (1.2 in). The weapon was to remain the 75mm KwK 42 L/70. Production of the Panther 2 was slated to begin in September 1943.

In a meeting on February 10, 1943, further design changes were proposed, including changes to the steering gears and final drives. Another meeting on February 17, 1943 focused on sharing and standardizing parts between the Tiger II tank and the Panther 2, such as the transmission, all-steel roadwheels, and running gear. No plans were made to include the 8.8 cm L/71 as the turret diameter was too small. In March 1943, MAN indicated that the first prototype would be completed by August 1943. A number of engines were under consideration, among them the new Maybach HL 234 fuel-injected engine (900 hp operated by an 8-speed hydraulic transmission).

Thus, plans to replace the original Panther design with the Panther II were already underway before the first Panther had even seen combat. But, from May to June 1943, work on the Panther II ceased, as the focus was shifted to expanding production of the original Panther tank. It is not clear if there was ever an official cancellation; this may have been because the Panther II upgrade path was originally started at Hitler's insistence. The direction that the design was headed would not have been consistent with Germany's need for a mass-produced tank, which was the goal of the Reich Ministry of Armament and War Production. Additionally, many of the problems the Panther II was made to address had been resolved, such as the weak side armor.

One Panther II chassis was completed and eventually captured by the U.S. It is now on display at the Patton Museum in Fort Knox. The turret from a Panther (I) Ausf G is mounted on this chassis.
click to read more...