The Ke-Ho behaves much like the British Tier IV Covenanter light tank, yet out performs it in most ways. It is small in size, rather quick, with good agility and camo values, and a fast firing cannon makes it a mean opponent to assassinate lone enemies with. It also doubles as a support tank very capable of picking off enemies from around 100 meters. Or you can work in a light wolf pack punching holes in tanks in a not so dissimilar way to the Matilda. Its small size can also make it suitable for ambush duties should the situation arise.

The tank can take a hit but avoid brawling with anything other than lower tiers or badly wounded tanks as the armor is so thin a swift breeze could go through it; do however take advantage of the tiny turret and excellent gun depression to fire shots from behind cover.

This tank has one of the meanest guns at Tier IV, the 57mm Experimental. It's capable of more than 1875 DPM and its aim time is a little slow but you need not wait to fire if you are close enough to your target. The penetration can get through targets easily up to Tier V, and the damage is about average for its tier.

There's no perfect premium crew trainer for the Ke-Ho, but you have it you can place your commander and driver in the Tier II Type 97 Te-Ke.

The Ke-Ho might be a difficult drive to begin with, learning not to engage with enemies until its guaranteed you're not gonna get hit is maybe frustrating at first, but it's the right way to drive this tank, and most other tanks in the Japanese tree. Once you've overcome this tank's weakness you'll quickly become one of the deadliest tanks at Tier IV.

The Type 5 Ke-Ho (五式軽戦車 ケホ Go-Shiki Keisensha Keho) was the last light tank designed by the Imperial Japanese Army (IJA). Though it had performed well in the early stages of WWII and even before it, the Type 95 Ha-Go was showing it’s age by 1942. An attempt had already been made to replace it with the Type 98 Ke-Ni and Type 2 Ke-To. However these projects failed to fully materialize.

Following this the IJA decided to try again and work started on the Ke-Ho.

Development of this new light tank began in 1942. Up till then the Ha-Go had performed well against American M3 Light tanks, but suffered dreadfully against the larger M4 Sherman. Its last successful engagement was against US forces on the Bataan Peninsula in December 1941 who only had M3 Stuart Light tanks.

Of course, the name “tank” should be applied loosely to any Japanese armored vehicle of World War II. One of the major shortcomings of the Ha-Go was the fact that a .50 cal (12.7mm) machine gun could effectively knock one out. The Type 98 Ke-Ni and Type 2 Ke-To had somewhat of an armor upgrade, at least enough to defend against .50 cal rounds. They still lacked a gun capable of even scratching a Sherman. These vehicles were not produced in substantial numbers, with only 104 Ke-Ni's and 34 Ke-To's built by the end of the war.

The Ke-To experimented with a slightly better main armament in the form of Type 1 37mm (1.46 in) gun. This offered a much-needed improvement over the Type 94 37mm (1.46 in) used on the Ha-Go. Though a step in the right direction, this weapon still was not enough to combat the M4 at any angle.

As such, the Ke-Ho was to be armed with the Type 1 47mm (1.85 in) Tank Gun II. This was a planned variant of the Type 1 47mm found on the Type 97 Chi-Ha medium tank. The performance of the Type 1 Gun II is unknown, however the performance of the standard 47mm is. Penetration of the weapon's Type 1 APHE shell at 30 degrees was 55mm at 100m, 40mm at 500m and 30mm at 1,000m. This was still only enough to penetrate the side of a Sherman, leading to the ambush style of combat used by Chi-Ha crews. An experimental long-barreled 57mm gun was also tested on the Ke-Ho.

The cannon was mounted in a turret based on the Type 1 Chi-He's. It had a raised commander’s cupola, next to which was a mounting point for a Type 97 machine gun. This turret was mounted on an enlarged Ke-Ni/Ke-To chassis, slightly off to the right of the center line. It had a Type 97 MG mounted in the front right left of the bow. The vehicle had a short wheel base, with a bell crank suspension using a similar layout out to the Chi-He’s. The Ke-Ho was powered by a 150hp air-cooled diesel engine that would crank out a decent top speed of 50 km/h.

In 1942, a prototype vehicle was built, and the project was cancelled soon after. As with most new tank designs the Japanese came up with, it was low on the list of importance. Resources and construction efforts were instead being focused on warships and warplanes. Mass production was approved in 1945 however, but this was of course too late and the one prototype remained the only one built. This also meant that the Ku-Se variant never left the drawing board. 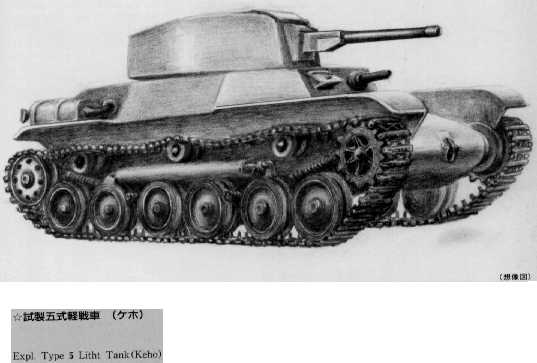 Japan
Light Tanks
ja:Tank:J06 Ke Ho
Retrieved from "http://wiki.wargaming.net/en/index.php?title=Tank:J06_Ke_Ho&oldid=321953"
Categories:
Your location:
To log in, select the region where your account is registered
CIS Europe North America Asia
Or use Microsoft Login to enter WoT XBOX ecosystem
Log in