USSR | TD | Tier VI
Battle Tier
1234567891011
Overview
Mouse over "
▲
Well, the ones further down, of course.
" for more information
[Client Values; Actual values in
▲
Specifically, the mismatch in crew values caused by commander's 10% crew skill bonus. Outside of a crew of 1 commander only, 100% crew is a fiction. The client values, given for 100% crew, will normally be taken into battle with 110% crew skill members aside from specific functions, causing their actual performance to deviate from the expected client value. These differences are taken into account in tooltip boxes.
]
Crew
Mobility
Armor
Armament
General
Values are Stock - click for TopValues are Top - click for Stock
SU-85
SU-100
SU-100M1SU-152

Tank destroyer on the basis of the T-34-85 and SU-85 with a total of 2,495 vehicles produced from September 1944 through June 1945. After the vehicle saw service, the Red Army praised it as a very effective tank destroyer with strong firepower, which could stand against any mass-produced German armored vehicle.

- Very weak Ammo rack can be hit from the front

- Tracks can be easily broken

- Low view range, though still a gigantic improvement over SU-85

- Vulnerable to drowning when crossing rivers due to low height 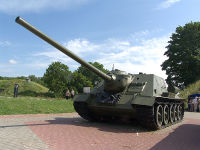 As early as May 1944, an attempt to fit the 122mm D25 gun onto the SU-100 was made. This prototype was known as the SU-122P, and in September 1944 it underwent trials. Mass production was not carried out for the following reasons -

All this was enough to reject the SU-122P. To makes even worse, there was the deputy commissar of tank development Kotin’s opinion – he distrusted the principle of mounting high caliber guns on the T-34 chassis. And the last thing – the D-25 guns went for the IS-2 production and so it was considered not practical to have two platforms with the same gun.

A SU-100 is used by the protagonists in the movie The Misfit Brigade, where it is portrayed as a German tank, possibly because it resembles the Jagdpanzer 38 (t) tank destroyer and the Jagdpanther. Ironically, the film has a scene where the Germans spot one, supposedly captured by the Russians, and proclaim: "That's one of ours! It sure is, and its a terrible paint job. You can still see the cross! ... Ivan's pinched my tank!" The film is also known as Wheels of Terror, based on the book by Sven Hassel.

USSR
Tank Destroyers
ja:Tank:R17 SU-100
Retrieved from "http://wiki.wargaming.net/en/index.php?title=Tank:R17_SU-100&oldid=292152"
Categories:
Your location:
To log in, select the region where your account is registered
CIS Europe North America Asia
Or use Microsoft Login to enter WoT XBOX ecosystem
Log in