World of Tanks Referrals Program 2.0
The World of Tanks referal program allows players to recruit players with less than 600 battles to... (placeholder text).

It will be possible to send invitations to potential recruits to participate in the referral program in the following ways: 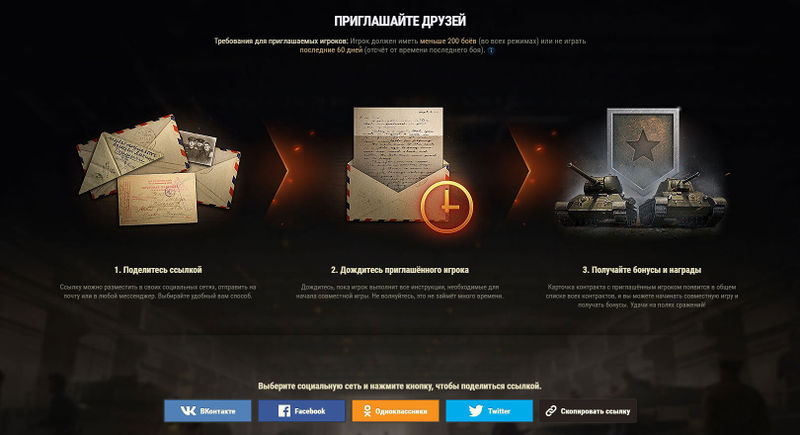 Opening the link will take the potential recruit to the start page, where he can create a new account or log in to the portal. A check is made to see if the player can become a recruit. If the recruit passes the check, he must confirm his participation in the referral program together with the player who sent the link (you will need to enter the name of the inviting player).

Who can become a Commander / Recruit?

Any player who has fought 600 or more random battles in the game will be able to become a commander and invite recruits.

A commander can invite 2 recruits every four months. Four months later, a new season will begin and the commander will be able to invite 2 more recruits.

The commander will be able to recruit a player if the following conditions are met:

The recruit must follow the invitation link sent by the commander and join the referral program. After that, the commander will have a recruit card in the appropriate window ("Contract").

Some of the tasks for recruits can be done independently; other tasks need to be completed only when playing in a platoon with the commander, since referral points go into the overall standings. In the case of completing platoon tasks, progress will be accelerated, since platoon and individual tasks can be performed simultaneously. The commander will not have individual tasks, but he will be able to help his recruits by playing with them.

The referral contract can be terminated at any time by either party. This can be done in one of the following ways:

A previously terminated contract cannot be re-entered into.

On January 15, 2019, the World of Tanks version 1.0 of the referral program was discontinued in all regions. Version 1.4 launched a new referral program, the idea of making recruitment as simple as possible: call your friends to the tanks and earn rewards!

Retrieved from "http://wiki.wargaming.net/en/index.php?title=Tank:Referrals_Program_2.0&oldid=310514"
Your location:
To log in, select the region where your account is registered
CIS Europe North America Asia Republic of Korea
Or use Microsoft Login to enter WoT XBOX ecosystem
Log in