Sweden | TD | Tier VII
Battle Tier
1234567891011
Overview
Mouse over "
▲
Well, the ones further down, of course.
" for more information
[Client Values; Actual values in
▲
Specifically, the mismatch in crew values caused by commander's 10% crew skill bonus. Outside of a crew of 1 commander only, 100% crew is a fiction. The client values, given for 100% crew, will normally be taken into battle with 110% crew skill members aside from specific functions, causing their actual performance to deviate from the expected client value. These differences are taken into account in tooltip boxes.
]
Crew
Mobility
Armor
Armament
General
Values are Stock - click for TopValues are Top - click for Stock
Ikv 65 Alt II
Ikv 90 Typ B
UDES 03

The Ikv 90 Typ B is a Swedish tier 7 tank destroyer.

A vehicle project by the Bofors company. Developed in 1965-1966 as part of the competitive search for a light tank by the Swedish Ministry of Defence. The lightly-armored vehicle was to combine high speed, maneuverability, and a powerful gun, which would be effective against modern tanks and support troops on the battlefield. The design project was ready in January 1966 and further work was scheduled. However, no prototype was produced.

- Good gun arc (20 degrees on both sides), it also has a great depression (Especially for vehicle with rear-mounted gun) value of -10 degrees.

- The top gun (90 cm kan m/F) has a stupendous shell speed that might allow you to shoot fast moving targets.

- Excellent penetration both on stock gun and top gun.

- Practically no armor combined with Lowest non-SPG health in its tier (800); very vulnerable to HE shells and can be easily get one-shotted by SPGs and large caliber howitzers.

- Engine gets constantly damaged from front, Stock engine had poor p/w ratio. Can accelerate only up to 45KM/H for the best, also turns slowly when moving at high speeds.

- Very poor view range for its tier, forced the player to get closer to the enemies and somewhat negated its camoflage ratings.

Even though this TD has a very good top speed and acceleration, it can´t be used for close combat. It is suggested to use this speed to reach crucial spots early in the battle (e.g. hills, corners, bushes, buildings, sniping positions), and also to retreat from too intense combat or dangerous situations. As a lightly armored vehicle you also have to avoid getting shot by high caliber guns, especially artillery and howitzers (derp guns). Additionally, the armor is so thin that any gun it encounters will overmatch, no matter what the angle.

One thing to note is that this TD has a very low profile, which means you can stay hidden in a bush and shoot safely, provided the player knows spotting and concealment mechanics, but don´t expect to be a ghost.

The maneuverability of this TD is limited by the traverse speed, with only 30 deg/sec you will have trouble facing agile opponents, so you have to make sure the target is far enough from you to prevent it from circling you. Don't be afraid to face high tier enemy tanks, but have in mind you must be as stealthy and accurate as possible, always have an escape route and a trustful scout at hand.

- The Ra 105 and Ra 106 radios can be researched in the previous vehicle, mount the Ra 105 at least. The top radio is not essencial and can be skipped since it is automatically unlocked as a stock radio when the UDES is researched, but have in mind you can lose communication with far away-positioned allies in the mini map.

- First either research the top suspension, or mount enhanced suspension equipment, because the stock suspension will not allow even gunrammer + binoculars.

- Research the top engine for a better acceleration, it will give you more chances to take positions early and to withdraw from intense combat.

- Research the top suspension, if you haven't done so already. It is required to mount the top gun.

In 1964, a project called Ikv ny was started. The goal of this project was to acquire a new cheap vehicle, which could offer good mobility and still be able to both support infantry like older Ikv’s, but also would be able to fight tanks. Essentially, the idea had come about as there simply weren’t enough modern tanks in the Swedish army and there was a need to re-equip a large part of the army, which was still using modified WW2 era vehicles.

In the discussions leading up to the project, a number of different armament options had been considered, ranging from ATGM’s to 10,5cm and 12cm tank guns, but to cut down the unit cost, it was decided that the new Ikv should use a 9cm gun capable of shooting modified ammunition from the newly developed Pvpj1110 recoilless rifle, which was entering service at the time. These discussions also set up series of other requirements for the vehicle, described as a lightly armored vehicle weighing only 15 tons, which was to have the top road speed of 70kph with a crew of no more than 4 men. The vehicle was to be able to operate in the harsh conditions of the northern parts of the country, have good gun traverse and the gun elevation of at least -10/+20 to allow it to make use of hull down positions.

As the project moved on in 1965, three different companies were contacted to propose their designs for the new Ikv. The first company was Landsverk, who had created the original Ikv’s and had been producing tanks since the 1930s. The second was Bofors, who was already working on the completion of the S-tank project. And finally there was Hägglunds, who was a newcomer to armored vehicles, but had recently won the contract for the Swedish army’s next APC.

Given their different backgrounds it’s not surprising that these companies came up with very different answers to the same requirements.

The Landsverk proposals were probably the most traditional and realistic with mainly casemate designs, some of which were based on the old Ikv chassis. However, since both the other companies came up with turreted designs, Landsverk was asked to come with one of their own, which did lead to two rather interesting designs. Most of Landsverk’s proposals had been designed to make use of existing vehicles and many components were to be shared with the Pbv 302 APC to allow for greater interchangeability of parts between the vehicles. The main armament was a 90mm L/53 Bofors low pressure gun, which could fire HE and HEAT rounds. Overall, the Landsverk proposals were very light on the armor even when compared to the other Ikv proposals and a lot of the casemate designs had a maximum of only 15mm at the front. One thing the designs did have however was excellent gun traverse (40dg) and depression/elevation (-10/+35).

Bofors had an interesting mix of features, which borrowed from their ongoing work with the S-tank, all of their designs had – like the S-tank – frontally mounted engine and some models featured an autoloader. Initially, three versions, called Ikv 90 A, B and C were offered. The A and B models were pretty much the same vehicle but differed in the use of a casemate on the B model and a turret on the A model, both of which could be equipped with an autoloader. The C model was the smallest one and was designed with a shorter 90mm gun than the other two models, this model was however not liked and later dropped when the proposals were redesigned. To meet updated requirements on gun elevation Bofors redesigned the model A and B into models T and S. The model T differed very little from the model A but it did have changes to the turret and hull, however model S had turned into what was basically a miniature S-tank but with gun elevation and depression independent of the hull.

Unlike the other companies, Hägglunds had focused their efforts on mainly turreted designs for the new Ikv project. They had also probably overestimated some aspects of their vehicles, like the projected top speed and the use of autoloaders on certain models. In any case, Hägglunds had done a more thorough research of the possibility of using foreign engines or guns and had even based their projected vehicles around a French 90mm gun rather than the Bofors model. The guns, considered by Hägglunds, were the DTAT 90mm L/51,5 from the AMX-13, a licensed produced version of that gun by Motala Verkstad, the Bofors 90mm L/53, used on the other companies Ikv proposals and a DTAT 105mm low pressure gun using the same recoil mechanism and breach as the French 90mm. These guns were to be available for use with either a conventional loading system, a fully automated loader or a semi-autoloader with a 4 round magazine, which would be continually fed by the loader. The armor of the vehicle was – as with the other proposals – very light with a maximum of 20mm at the front, but unlike the other companies, Hägglunds made extensive use of spaced armor for the hull sides and sometimes rear. It was however very thin and was only meant to offer protection against small arms.

As the project continued into 1966, it became clear that the Bofors proposals were the most problematic, as they were completely new vehicles, sharing no parts in common with other Swedish vehicles. Because of this, it was decided that development of the Bofors proposals would be discontinued, it’s at this point where Landsverk and Hägglunds are asked to finalise their designs for the Ikv project. For Landsverk, this means redesigning the Alternative 5 design into a sort of half turret design seen below. 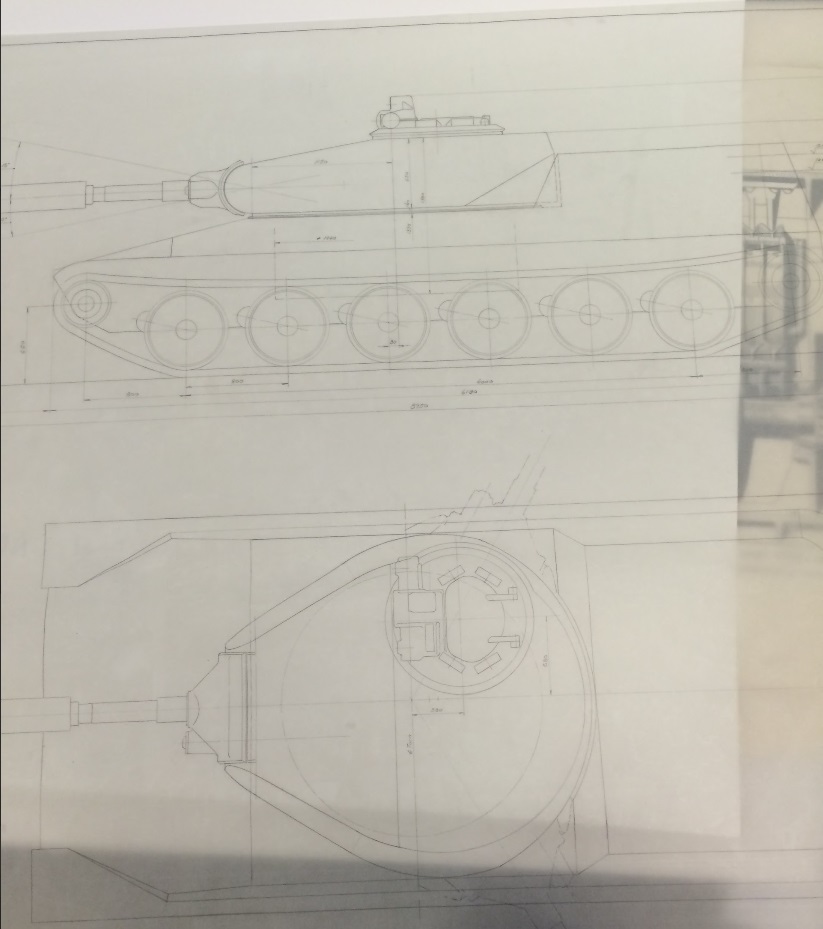 Hägglund also redesigned their proposal 1 to be more viable, which meant the removal of the autoloader and a change in turret design and results in what would become the Ikv 91. It was said that the army actually preferred the Landsverk proposal, but that they ultimately chose Hägglunds proposal due to the greater interchangability of parts between their vehicle and the Pbv 302, also designed by Hägglunds. 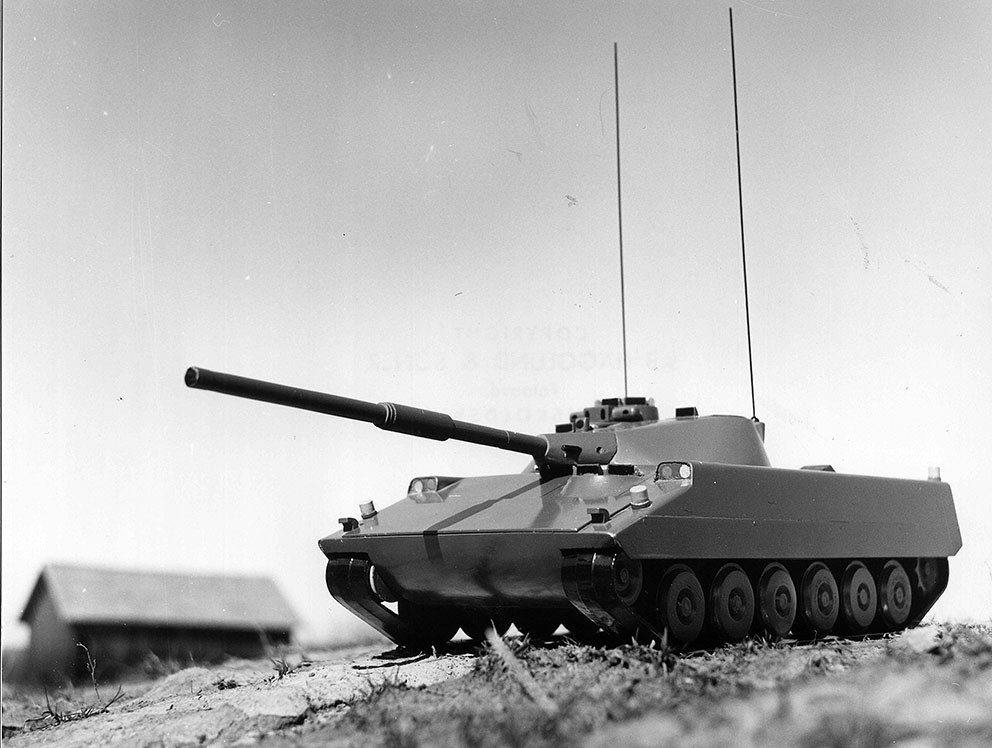 Sweden
Tank Destroyers
ja:Tank:S06 Ikv 90 Typ B Bofors
Retrieved from "http://wiki.wargaming.net/en/index.php?title=Tank:S06_Ikv_90_Typ_B_Bofors&oldid=291661"
Categories:
Hidden categories:
Your location:
To log in, select the region where your account is registered
CIS Europe North America Asia Republic of Korea
Or use Microsoft Login to enter WoT XBOX ecosystem
Log in