Sweden | Light Tank | Tier III
Battle Tier
1234567891011
Overview
Mouse over "
▲
Well, the ones further down, of course.
" for more information
[Client Values; Actual values in
▲
Specifically, the mismatch in crew values caused by commander's 10% crew skill bonus. Outside of a crew of 1 commander only, 100% crew is a fiction. The client values, given for 100% crew, will normally be taken into battle with 110% crew skill members aside from specific functions, causing their actual performance to deviate from the expected client value. These differences are taken into account in tooltip boxes.
]
Crew
Mobility
Armor
Armament
General
Values are Stock - click for TopValues are Top - click for Stock
Strv m/38
Strv m/40L
LagoSav m/43

In 1940, the Swedish army experienced an acute need for armored vehicles. One of the solutions to the problem was the modernization of the L-60 tanks. The first 100 modernized vehicles received improved armor and a new automatic transmission. Modernization was performed by AB Landsverk; this is why these vehicles entered service named Strv m/40L. Later, vehicles that were manufactured at the factory in Karlstad were equipped with more powerful engines, improved suspension, and armor. These vehicles were designated Strv m/40K.

- Very high rate of fire -- top gun has a base of 30 rounds per minute, easily increased even further with skills and equipment

This tank plays somewhat like the British cruiser tanks in that it performs more like a fast medium than a light tank. It has good frontal armor that can bounce a surprising number of shots and excellent penetration on both guns. The main downside is the low alpha damage coupled with the large dispersion while moving the tank, and the poor radio range limits its usefulness as a scout.

With the m/40L's crew setup of Commander/Gunner/Driver the Tier II L-60 is the only Swedish premium light that may serve as a perfect crew trainer, but in a pinch the newer Lago M38 can be used if a Loader (like the one that came with the M38) is supplied.

The Strv m/40L should be used on hilly terrain where it can put it's decent armor and crazy gun depression to good use.

Bypass the stock suspension with equipment unless you are really low on money and get the top gun/turret first, then the top radio.

Sweden was now in a really bad situation. Its neighbor, Finland, was already involved in the war with the Russians and in 1940, the other neighbor, Norway, got invaded by the Germans. To top it all, the previously-ordered 90 Czech TNH tanks (the order was made before the invasion of 1939) had now been cancelled by the Germans, who seized the tanks for their own army. This meant that Sweden was cut off militarily from the outside world and would have to rely on its own tank designs. Therefore the L-60 was modified once again, this time with mass production in mind. The tank was largely the same as the L-60-SII but was now equipped with an automatic gearbox, some vehicles could even mount a mortar on the back for infantry support in addition to the applique armor, but mainly the tank was simplified for mass production. The vehicle was designated Strv m/40L (“L-60-S III” by Landsverk). A total of 100 tanks of this type were produced between 1941 and 1942. 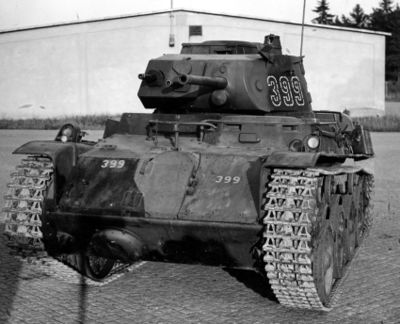 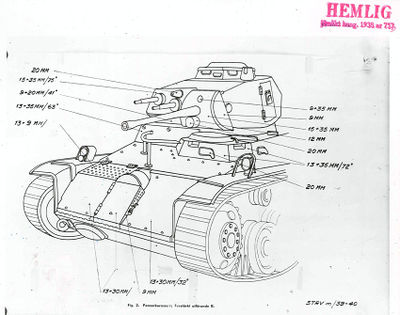 By 1943, Landsverk started to produce a heavier tank design and no longer had the capacity to produce the L-60 series of tanks, so instead their production shifted to Karlstad Mekaniska Werkstad. The L-60 design received another overhaul and the suspension was finally improved to the point where the applique armour could be built-in from the start. Other than that a new and more powerful engine was fitted, the result of which was to make the vehicle longer. This tank model was designated Strv m/40K by the army (and L-60-SV by Landsverk). An interesting thing to note is that there is no information on the previous L-60-S IV design, other than it weighed 12 tones and had the same armament as well as an unknown 180hp engine. Nevertheless 80 Strv m/40K tanks were produced between 1943 and 1944, and this was the final version of the L-60 to be produced during the war. 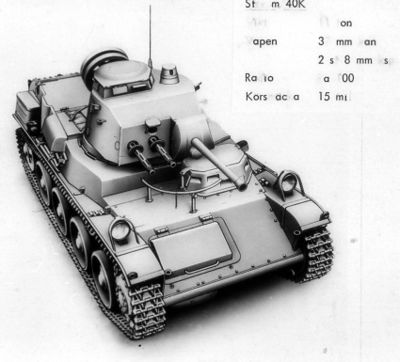 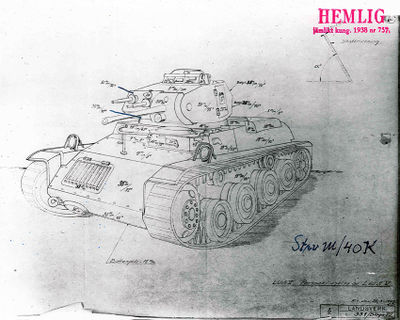 After the war some models of the tank were still in active service during the 50's; there were even plans to re-equip the tanks with a new turret with a 57mm gun. The idea had been around since 1944, but the first prototype was only ready by 1949-1950. The prototype hull was that of the Strv m/40L and the turret mounted the 5.7cm Pvkan m/43 gun. The vehicle was designated Pvkv IV “Värjan” (Pvkv meaning “tank destroyer 4″, it was named “Värjan” after a kind of sword, used by the Swedish Carolean army in 16th century). The new turret and the gun increased the weight by 500kg, but this was compensated by the removal of the applique armour. The turret was poorly armored to keep the weight down, with a 20mm gun mantelet and 12mm of armor everywhere else. The trials of the prototype showed that there were big problems with the aiming system and the project was discontinued. 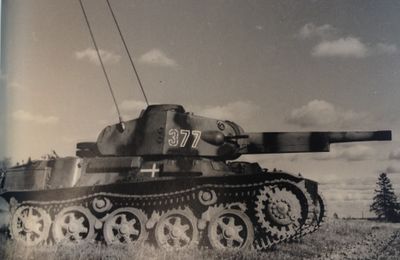 The last model of the L-60 to serve with the Swedish army was the Strv m/40K, which was retired in 1957. However a few years later 25 Strv m/40s were sold to Dominican Republic. There, some of them would serve until the 1990's. In fact, three of these tanks were lost while fighting the American Marine Corps; one was even destroyed by a M48 Patton. 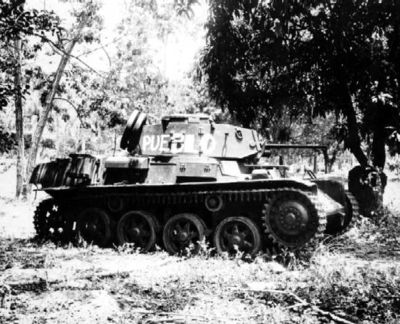