-The 75mm cannon has very good accuracy, gun handling and damage per minute, making it a competitive alternative to the 105mm cannon

- The hitpoints pool is in the lower half of the tier 7 medium tanks, with only 1100 hitpoints

- Suffers from module damage; ammo rack gets damaged frequently and engine can be damaged from front

- Penetration is sub-par, just like the majority of tier 7 mediums

- The 105mm cannon has poor aim time, accuracy, and shell velocity. This can make it quite difficult to shoot at distant targets

- Awful stock grind, especially the slow hull traverse and poor view range for a tank that relies on speed to survive

The way this tank plays depends on the gun. With the 7.5 cm it is a typical flanking medium, reminiscent of the Comet and the T-43, compared to which it has better gun-handling. With the 10.5 cm gun, the Leo plays more like the A-44, with better accuracy but worse penetration. Unfortunately, unlike other tier 7 mediums with high-alpha guns, such as the T20 and the Konštrukta T-34/100, the Leo can not snipe effectively in this configuration, owing to the poor accuracy of the 10.5 cm gun. Compared to other tier 7 tanks it has less armour. In particular, it lacks an effective gun mantlet, which makes the turret front vulnerable when working ridge lines.

The first gun upgrade carries over from the Strv 74 and should be mounted immediately. This gun performs better than the stock gun and is already available

Also the radios can be researched on earlier vehicles for immediate mounting.

First researched upgrade should be the suspension, improves hull traverse and acceleration by a decent level. You also need it to mount more than 300kg worth of equipment (before unlocking the engines which saves a bit of weight)

Next upgrades will be the engines, letting you play as a flanker and benefit from its best in class speed limit

Final upgrade will be the 10.5cm gun and turret. You may not want to use the 10.5cm gun on the long run but unlocking it is necessary to get the top turret which boosts the guns' specs and gives a bit of extra health.

By 1944, Sweden had access to a fairly large, but mostly outdated tank force. Most of the tanks in the Swedish army were 10 ton light tanks and the new Stridsvagn m/42 medium tank was already becoming obsolete. Therefore, it was decided to start a new series of projects to replace the ageing Swedish tanks.

Besides the plans for up-gunning the Strv m/42 with a 75mm autoloader and a 10,5cm self-propelled anti-tank gun based on the Strv m/42, there were also plans for two new vehicles in the 30 ton range. The first one was a new medium tank, that was to be further development of the Strv m/42, with a long 75mm gun and a more powerful engine, the vehicle was also meant to be wider and to have an overall lower height. The 2nd project was to be a new tank destroyer, that would be similar to the Pansarvärnskanonvagn m/43 but with much heavier armament. The vehicle was to carry a modified version of the 10,5cm L/50 anti-aircraft gun, and the frontal armour was to be “especially thick”.

In 1945, discussions were held regarding the guidelines for the 30 ton tank. The discussions concluded that the vehicle should be armed with a 7,5cm gun with a muzzle velocity of at least 1000m/s or a 10cm gun with a muzzle velocity around 850m/s. Another interesting thing discussed was that the turret should have sloped sides and if possible, it should be cast as a dome shape. The armour of the vehicle was estimated at around 70mm front, 35mm sides and 30mm rear.

In 1946, it was decided that the new 30 ton TD would serve as the basis for the chassis of the 30 tonne medium tank, a lighter 25 ton version of the medium tank is also proposed. The 25 ton medium was to be frontally protected against 57mm guns and was to be able to mount appliqué armour to allow for protection from 75mm guns. Soon, the design works on the new TD and medium tank start at Landsverk. The TD was to have modern shape with heavily sloped armour all around, it was supposed to be armed with a high-power 10,5cm gun and to have top speed of 60 kph. Attempts were made to acquire a foreign high power diesel engine, but the only company to respond was the British Rover company with their offer of a 620hp gasoline engine. The vehicle was to share the same type of gun mount as the Pvkv m/43, with the main gun of equal performance to the 10,5cm L/50 anti-aircraft gun, but with the ability to fire sub-calibre ammunition. The gun was to have good field of traverse of 15dg to each side, it was also supposed to have a 10dg depression and 25dg elevation.

The project continued well into 1947 and plans were made for the construction of a prototype. Landsverk privately started to work on this prototype which they designated as TLP. However, in 1947, the army decided that they no longer want vehicles in the 30 ton range and the project is effectively mothballed. The project would later resurface in 1949, but at that point, it would be based on a completely different chassis, that is however a story for another time. Instead, the idea of better sloped armour, that came from the TLP-46, was put to use in the Pvkv fm/48, a modernisation of the Pvkv m/43 hull, which was however also cancelled before reaching the prototype stage.

Landsverk however continued to development the 25t medium tank, that was to share its chassis with the TLP-46 and offered it for export in 1948 as the Strv Leo. The Leo was equipped with a 7,5cm anti-tank gun in a large turret, it was powered by a Volvo A8B 410hp engine and had a top speed of 55kph. The frontal armour was well sloped and reached maximum thickness of 70mm. The tank was offered to several countries, but no one bought the design. 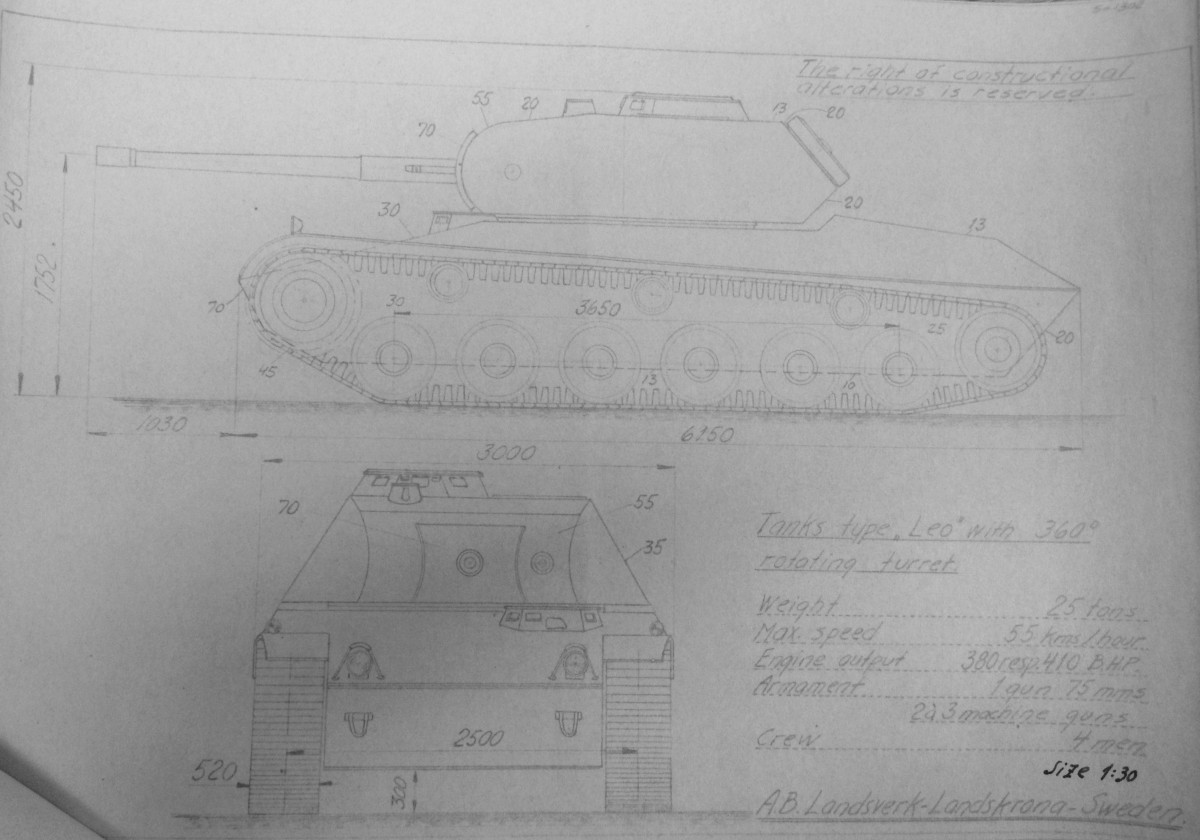 One of the vehicle's proposed armaments, the 10.5cm Stridsvagnskanon fm/49, is unavailable.
click to read more...

Sweden
Medium Tanks
ja:Tank:S13 Leo
Retrieved from "http://wiki.wargaming.net/en/index.php?title=Tank:S13_Leo&oldid=294688"
Categories:
Hidden categories:
Your location:
To log in, select the region where your account is registered
CIS Europe North America Asia Republic of Korea
Or use Microsoft Login to enter WoT XBOX ecosystem
Log in