Sweden | TD | Tier III
Battle Tier
1234567891011
Overview
Mouse over "
▲
Well, the ones further down, of course.
" for more information
[Client Values; Actual values in
▲
Specifically, the mismatch in crew values caused by commander's 10% crew skill bonus. Outside of a crew of 1 commander only, 100% crew is a fiction. The client values, given for 100% crew, will normally be taken into battle with 110% crew skill members aside from specific functions, causing their actual performance to deviate from the expected client value. These differences are taken into account in tooltip boxes.
]
Crew
Mobility
Armor
Armament
General
Values are Stock - click for TopValues are Top - click for Stock
Ikv 72

The Ikv 72 is a Swedish tier 3 tank destroyer.

After World War II, Sweden experienced an acute need for lightly armored vehicles that would provide fire support to the infantry. The Ikv 72 infantry artillery vehicle was created by Landsverk to fill a need. A total of 36 vehicles entered service before 1954. In 1956–1958, the vehicles were re-equipped with a more powerful 105-mm gun and remained in service until the mid-70s designated Ikv 102.

The Ikv 72 marks the end of its Swedish tank destroyer line.

- Good alpha damage and penetration, its top gun can one-shot any Tier III TD and almost every Tier II

- Often gets destroyed before it can finish off an enemy

The Ikv 72 plays somewhat like a Tier III equivalent of the SU-85. It has good mobility and outstanding camouflage values. Once the top gun is unlocked it can be played as either an ambusher or a sniper thanks to its good view range.

A special advantage of the Ikv 72 is its excellent gun depression, which is much higher than normal for this type of vehicle and allows it to effectively work a reverse slope. The main downside, when compared to other Tier III tank destroyers is the low rate of fire, which will get you in trouble when confronted by multiple enemies. The Ikv 72 cannot mount a gun laying drive but alternative solutions are mounting vents and/or training your crew in Brothers in Arms.

The best way to play this tank is as an ambusher behind the main lines, hidden behind thick bushes. But be sure to fully aim.

Note that although the front armor is well sloped and looks like it can bounce shots, the armor is so thin that most enemy guns will overmatch.

As of September 2022 there is no premium Swedish tank destroyer that can serve as a crew trainer for the Ikv 72; the closest being the Strv S1, which can be used to train up your Commander and Driver (leaving your Gunner and Loader in the lurch). It's probably better to leave your Ikv crew where they are and use crew books, personal reserves, and more battle time to get them where you want them.

- Researching the Ikv 72 and Ford ENN first to give the vehicle added mobility to fulfill the ambusher role - Next work towards the 7,5 cm kan m/41 ikv L/50 - Now you can either research the Ra 100 or save the research for the next vehicle 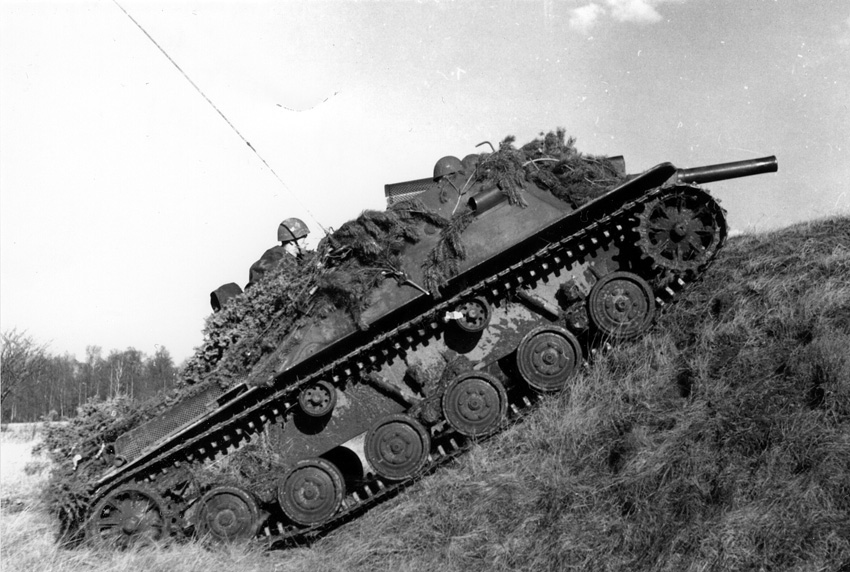 In early 1949, the army was looking to acquire a new generation of AFV’s. One of the requested vehicles was a new assault gun to fill the need for mechanized direct fire support for the infantry. It was believed that this vehicle could replace towed infantry guns, but to achieve this, the new assault gun needed to be as cheap as possible, so that numerous vehicles could be built. Therefore, it was decided to go with a very lightweight design, no heavier than 6 tons and to use readily available parts wherever possible.

A month later, the Landsverk Company responded with their initial drawing and a scale model of the new vehicle designated Tankett m/49. 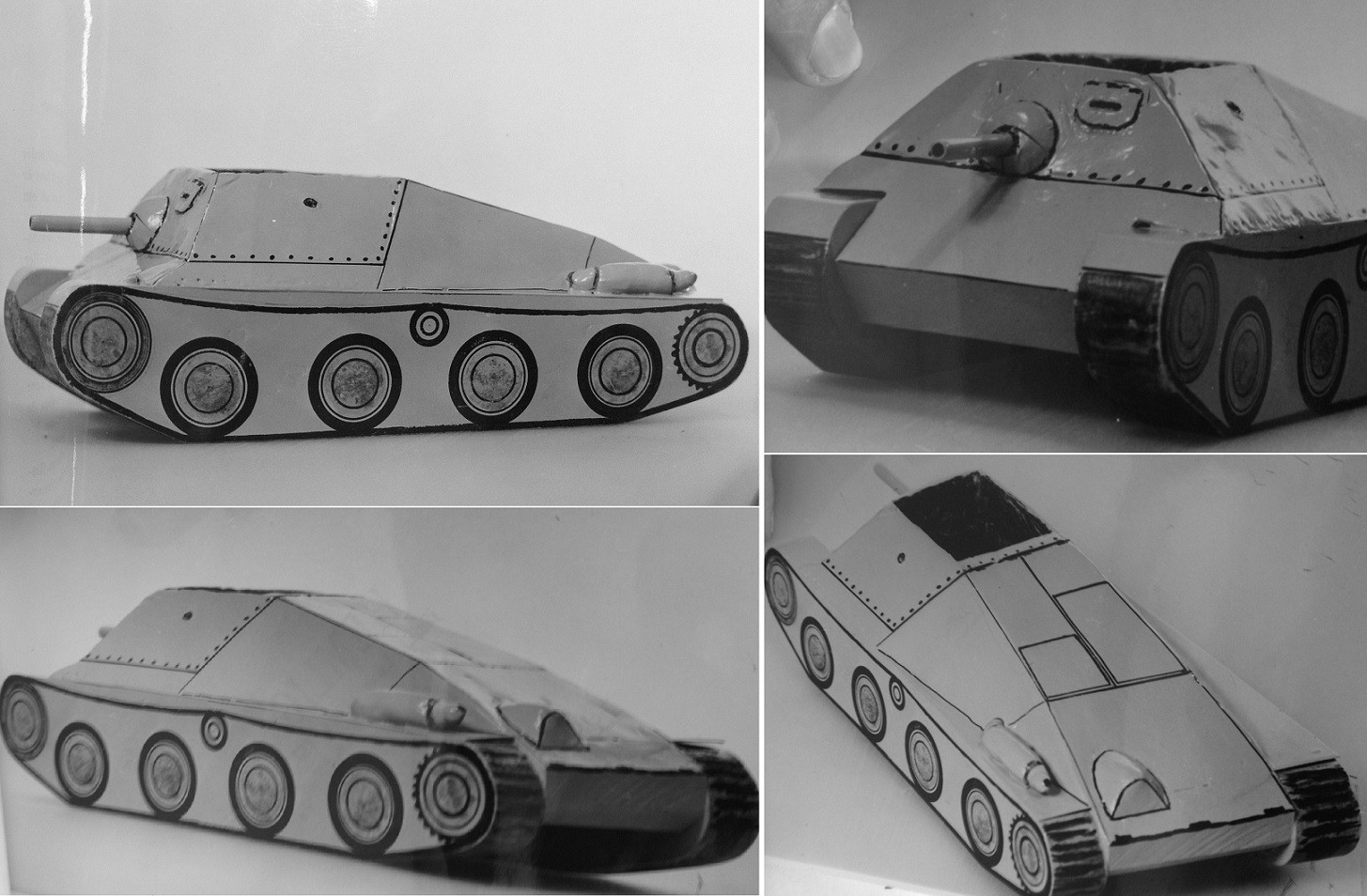 The initial version had a crew of three and a weight of 6 tons, it was however a rather preliminary design, since no gun or radio have been decided for the vehicle. As the development of the vehicle continued, the superstructure was redesigned and the crew increased to 4. Next, there was the question of its main armament. Three options have been considered. First, the same 75mm gun, that had been used on the Strv m/42. Second was a newly developed 84mm gun, which was considered in 4 variants with different muzzle velocities, or a modified version of the 105mm m/40 howitzer. Of these options, the 84mm was the preferred option, but due to the need to develop the gun from scratch, it was decided to arm the initial prototypes and production run with the 75mm gun. By the end of 1949, most of the issues with the design were worked out and preparations were made for the construction of a prototype.

The first prototype was armed with three 8mm machineguns and was finished in early 1950, this armament was however found rather lacking and the prototype was soon refitted with a 75mm gun. The rearmed prototype weighed 6,5 tons and was powered by a 105hp Volvo engine, that gave the tiny vehicle a power to weight ratio of 17hp/t and an impressive top speed of 60kph. As you can imagine, the low weight did not allow a lot of armor – in fact, the thickest armor on the vehicle was only 19mm on the upper front, with only 7mm at the sides and 5mm at the rear. Perhaps the most impressive feature of the Tankett fm/49 was the gun depression, that could reach a massive -25dg, which was actually more than the elevation, which only reached 20dg. However, the gun traverse was rather poor with only 10dg of traverse to each side. 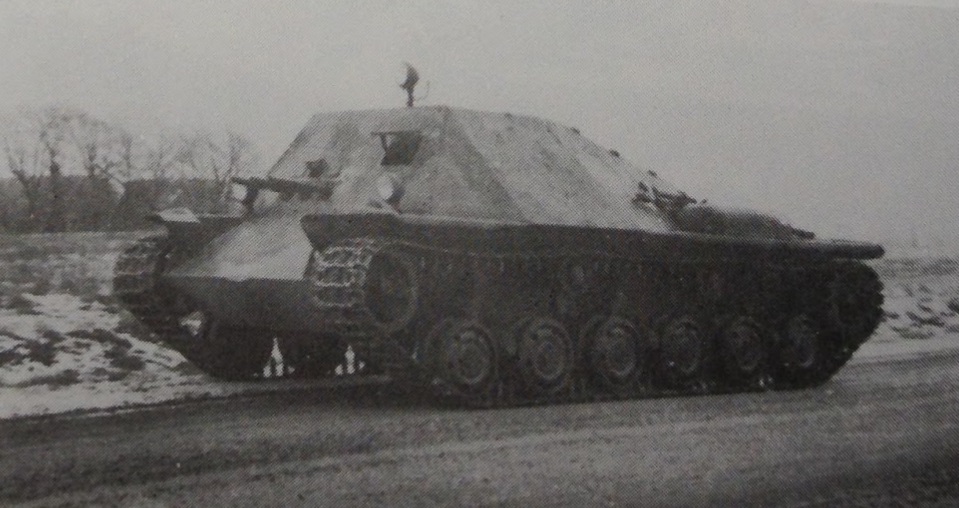 Rearmed prototype with a 75mm gun 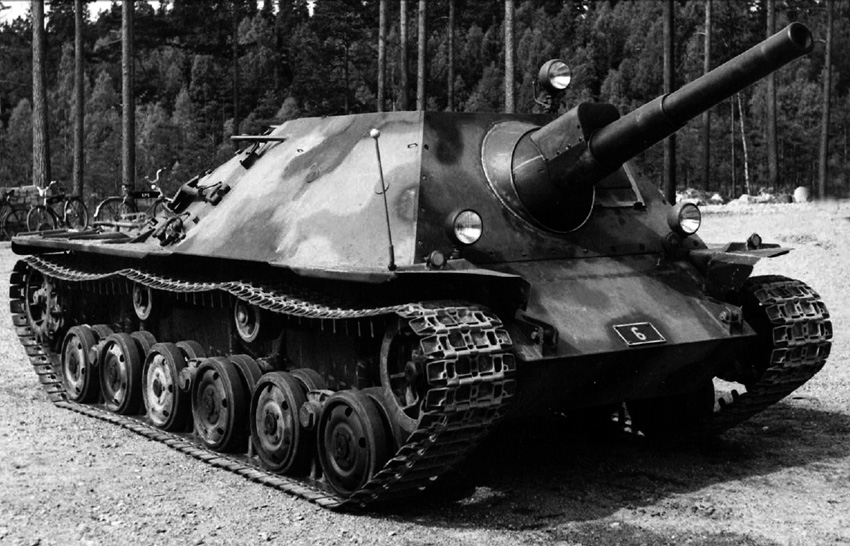 Drawing of the 84mm gun 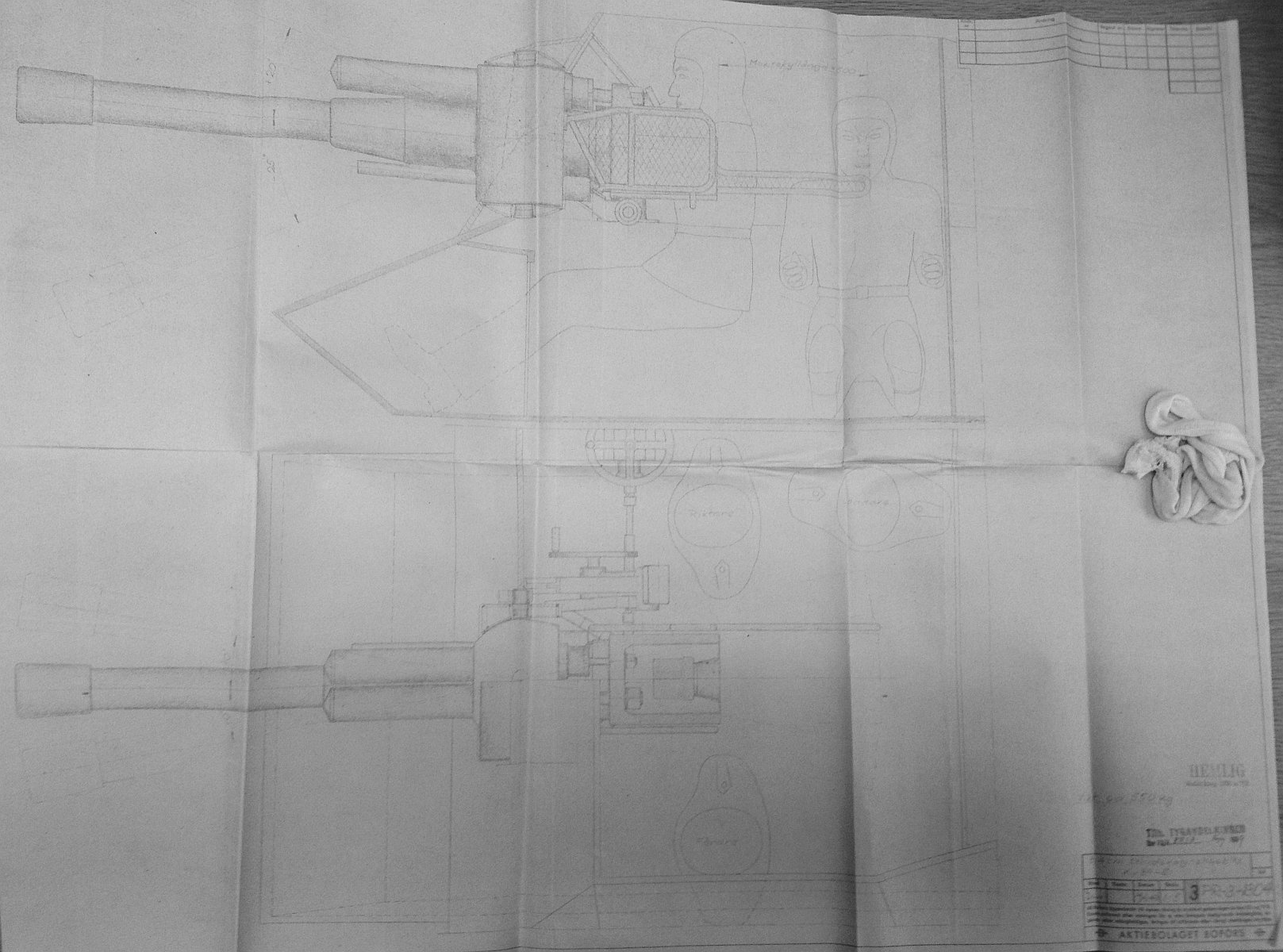 Another thing I want to cover is that it had fairly early on been decided that the chassis should serve as a platform for a series of light vehicles, that were labeled as “special variants”. These special versions of the Tankett fm/49 varied a fair bit, with everything from mortar carriers to flamethrower versions being considered and in some cases built and prototyped. Nothing ever came of these special variants however, since the chassis proved too light and the projects moved on to other platforms or were canceled altogether but I’ll tell you more about that when we get to the SPG’s. 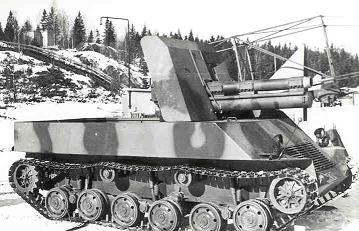 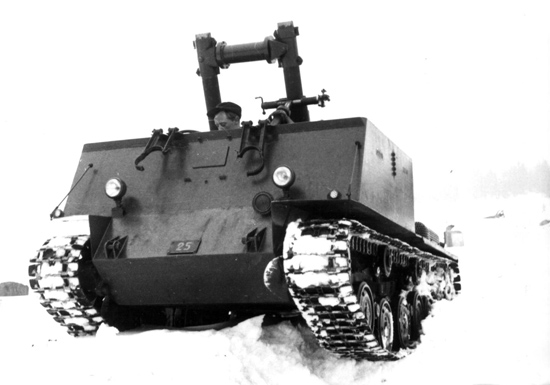 The tests of the prototypes continued well into 1950, but concerns arose about the low armor layout and it was decided to rework the frontal armor, so that it had better sloping. The second version of the vehicle, which incorporated these improvements later became known as Ikv 72 (infantry gun carriage). The main changes from the earlier model were a slightly reworked hull with a larger crew compartment and the use of a 145hp Ford V8 engine. The vehicle also became considerably heavier with a total weight of 8 tons, but with a better power to weight ratio of 18hp/t and slightly lower top speed of 57kph. In 1953, this vehicle was ordered into production with the first series of 36 vehicles following within a year. The armament of the vehicle was however not satisfactory for infantry support and work began on finding a bigger gun for it. It seems that as a part of this search, an older 10,5cm gun, originally used on the ww2 era Sav m/43 assault gun was tested, but we only have one small picture of a vehicle re-armed with this gun. 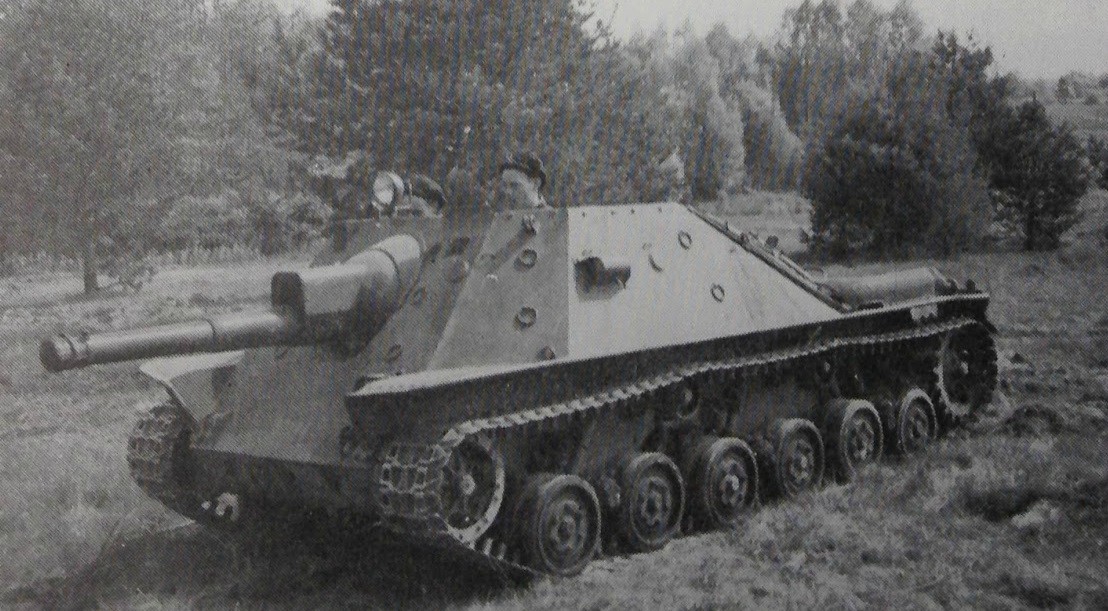 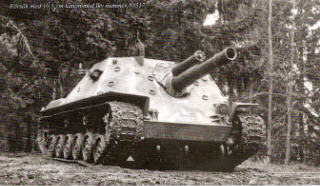 In any case, with the help of Bofors, the 10,5cm Haub m/40 howitzer was adapted for use on the Ikv 72. In 1956-58, all vehicles were rebuilt with a new roof and other improvements, as well as fitted with the gun. As such, the vehicle was re-designated Ikv 102. In this configuration, the vehicle served until mid 70s, when it was replaced by the Ikv 91.

* Some of the historical armaments are missing, including 10,5 mm howitzer and the 84 mm cannnon.
click to read more...

Sweden
Tank Destroyers
ja:Tank:S20 Ikv 72
Retrieved from "http://wiki.wargaming.net/en/index.php?title=Tank:S20_Ikv_72&oldid=322570"
Categories:
Hidden categories:
Your location:
To log in, select the region where your account is registered
CIS Europe North America Asia
Or use Microsoft Login to enter WoT XBOX ecosystem
Log in