Japanese Tank was introduced in World of Tanks update version 8.10. Currently, there is only one end-tier medium tank line and a super-heavy tank line. A tank-destroyer and second heavy tank branch, latter featuring more "traditional" heavy tanks as opposed to super-heavy tanks, are both set to release in 2023, heavily expanding the Japanese tech tree. 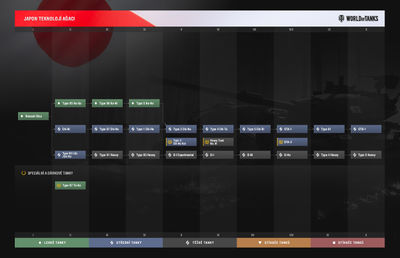 In the last few tiers, the turrets of the Japanese tanks, while not greatly increasing in armor thickness, begin to become well-rounded and sloped like their Chinese counterparts. The top of the tree; the STB-1 for instance has among the shallowest sloped turrets in the game, able to bounce nearly any shot, as well as having a special hydropneumatic suspension shared with Swedish high tier medium tanks, which allowed a room for more terrain usage for extra protection. They also likewise have cramped modules and crew. However, in contrast they still retain their excellent gun depression but also abysmal hull armor.

In essence, they are not jack-of-all trades and masters of none like the Russian Mediums, but are extremely potent as second line support tanks, and if handled properly can even take on primary roles in a pinch, if only temporarily.

Other than few similarities mentioned earlier, Japanese heavy tanks are nearly polar opposities of medium tanks. They generally have terrible mobility , flat but extremely thick armor (After tier 5), good gun depression, huge HP pools and large, inaccurate guns. Japanese heavy tanks lacks real weakspots on front, but at cost they are much worse at angling than their German counterparts due to either terrible side armor or having weak cheeks on front that becomes easily penetratable when angled. They are also the biggest tanks in the game, being notably bigger than even the Maus, making them very easy targets from artillery. They're also known for great module compatibility and don't require new turret or suspension to improve performance, making the Japanese heavy line fairly easier to grind than others tech line in the game.

The Low tier Japanese heavy tanks, The Type 91 and Type 95 have a design that resemblance with French interwar tanks (such as the B1). Unfortunately, these tanks suffers from poor mobility and armor. They do have excellent damage per minute, gun depression and choice for a guns with decent HE shells that can be crippling against most tanks in the same tier, though.

From tier 6 and above, Japanese heavy tanks are generally quite similar: they have option of two guns - 15 cm howitzers that primarly fire HE shells, or mid to large caliber gun that primarly fires AP shells, with mediocre to good penetration and decent to high alpha damage, but poor accuracy and DPM. They have very tough frontal armor with few weakspots, are gigantic, have poor mobility, generally poor side armor (that however gradually increases at higher tiers) and very high health pool.

The infamous O-I is capable of oneshotting most same tier tanks while having very strong armor, but it has extremely long reload on its 15 cm gun. O-Ni carries similar guns but has notably improved soft stats, acceleration and frontal armor, but most importantly, it gets a massive health boost. It also gets a new 10 cm gun with slightly higher alpha damage and penetration, but even worse rate of fire. The 15 cm howitzers are the most effective choices at these tiers, as they are still able to deal devastating damage, and even without penetration, the HE shells are able to severely cripple the enemy tanks. It is worth noting that patch 1.13 significantly reduced the effectiveness of the howitzers that rely on HE shells, but despite that, they can put in some serious work especially on the O-I.

At higher tiers, however, the howitzers become more or less worthless. On the other hand, the side armors of the Japanese heavies gradually get better at higher tiers. The O-Ho has decently fast rate of fire with its 10 cm gun, but the tank is otherwise a rather marginal upgrade compared to the O-Ni, and the tank also suffers severely from the frontal gun depression issues. Due to its huge list of flaws, the O-Ho is rather infamous for being one of the worst high tier vehicles in the game. At tier 9-10 position, the Type 4 and 5 receive completely new gun choices with the AP guns having notably higher alpha damage. The Type 4 Heavy loses miniturrets from its predecessor and gains much stronger side protection, making angling technically a more viable option, but suffers from even worse mobility and hull cheeks that limits angling ability despite the aforementioned side armor enhancements. It does get a powerful 14 cm gun with highest alpha damage of all the heavies in it's tier with reasonably good penetration with it's standard rounds. The apex of Japanese heavies, Type 5 Heavy, has much tougher side armor and hull cheeks no longer being outright weakspots, meaning that it can finally sidescrape effectively, something that earlier Japanese heavies could not. It also has fairly good gun handling and very high health pool for it's tier, though it's damage per minute is poor and it's penetration isn't as attractive as it was on the Type 4 Heavy. The Type 4/5 are still able to use 15.2 cm HE guns, but their damage output is very poor for their tiers (not improved from mid-tiers at all aside from their super expensive HESH shells that can only penetrate lightly to moderately armored targets), so using these guns is not recommended under most circumstances. Overall, the high tier Japanese heavy tanks have several flaws that hinder them, rendering the mid tier vehicles, namely the O-I, a more popular choice.

Retrieved from "http://wiki.wargaming.net/en/index.php?title=Tanks_of_Japan&oldid=325026"
Category:
Your location:
To log in, select the region where your account is registered
CIS Europe North America Asia
Or use Microsoft Login to enter WoT XBOX ecosystem
Log in