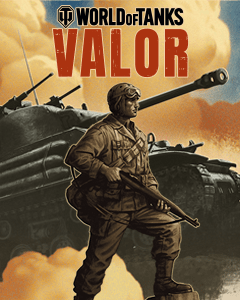 World of Tanks: Valor is the first massively multiplayer free-to-play online game about tank battles for game consoles. The PC version of World of Tanks was released in 2013, quickly gaining huge popularity among players all over the world, and received numerous awards.

World of Tanks: Valor utilizes the whole range of the current-generation console capabilities. The visuals in the game are astounding: incredibly elaborate vehicles and surroundings, various weather effects and light conditions, stunning fire and explosion FX.

You start with a small Tier I tank, but eventually advance to the mightiest war machines. Upgrade the guns, turrets, engines, and other modules of your vehicle to increase its fighting capacity. There are 5 vehicle classes in World of Tanks: Valor: Light tanks, Medium tanks, Heavy Tanks, Tank Destroyers, and Artillery — choose one that fits your playstyle or master them all.

With update 4.5, a new unique nation entered the game — Valor vehicles composed of parts of other tanks that had been destroyed or abandoned on the battlefields. Valor vehicles combine the best features of different tank-building industries, and the results are truly impressive. To get these unique war machines for free, activate and complete special contracts.

There are four battle modes in World of Tanks: Valor: Standard battle, Encounter, Assault, and Team Destruction. In a Standard battle, each team has to capture the enemy base while protecting its own. In an Encounter battle, there's just one neutral base on the map. Whoever captures it, brings victory to their team. An Assault is a fierce clash between attackers and defenders. There are no bases in Team Destruction. The team that destroys all enemy vehicles or deals the most damage by the end of the battle wins.

You can play the game on PlayStation 4 for free; no PlayStation Plus subscription is needed, whereas you must be an Xbox Live Gold subscriber to play on Microsoft consoles.

Retrieved from "http://wiki.wargaming.net/en/index.php?title=WoT_Mercenaries&oldid=293687"
Your location:
To log in, select the region where your account is registered
CIS Europe North America Asia Republic of Korea
Or use Microsoft Login to enter WoT XBOX ecosystem
Log in